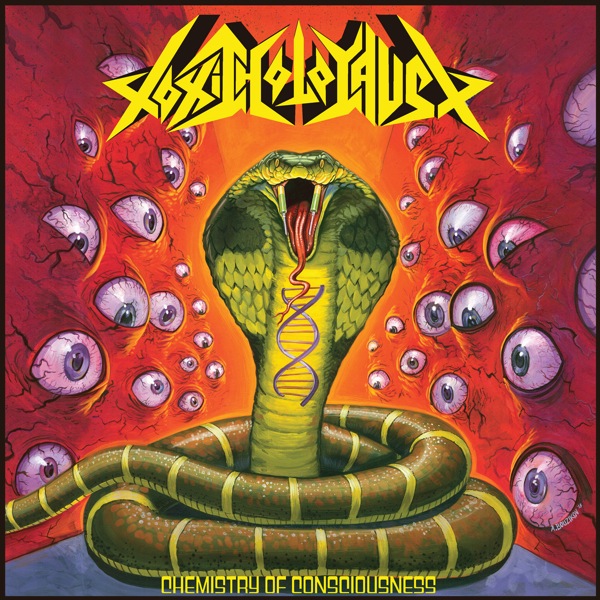 Based out of Portland, Oregon, crossover thrash band Toxic Holocaust have been around for 14 years now, having started out as a solo project by frontman Joel Grind but evolving more and more into a band as time went on. While Joel Grind still remains the band’s principal songwriter, their fourth studio album ‘Conjure And Command’ was the first to be recorded by the full band rather than Joel Grind playing all instruments himself. The follow-up album ‘Chemistry Of Consciousness’ came out via Relapse Records earlier this year and takes Toxic Holocaust a step further forward in this new incarnation. Musically, it draws from and maintains what the band has been known for, but in comparison to the previous effort, it come across as more of a ‘back to the roots’ approach. The first 90 seconds of ‘Rat Eater’ aside, nothing on this album is slow, and every single tune gets the listeners’ minds racing. In a live setting, all of these tunes will instill in audiences an instant need to bang and mosh. The 11-track, 28-minute Chemistry Of Consciousness is quintessential Toxic Holocaust at its savage best, and it’s hard to imagine any fan disliking it. The fast-paced rhythm created by the guitar riffs, bass and drums is the strongest and most constant feature of the album, with some well-crafted solos thrown in the mix and of course, Joel Grind’s furious vocals leading this sonic attack. ‘Out Of The Fire’ perhaps stands out as the best tune on here, but ‘Awaken The Serpent’ is the most important one as it starts the album and performs the task of pulling the listener in. Tunes like ‘Salvation Is Waiting’, ‘Acid Fuzz’ and ‘Deny The Truth’ keep the momentum going, and the title track aptly forms the final piece of this offering as it encapsulates what the album stands for. Fans of Toxic Holocaust and crossover thrash certainly can’t go wrong with Chemistry Of Consciousness.