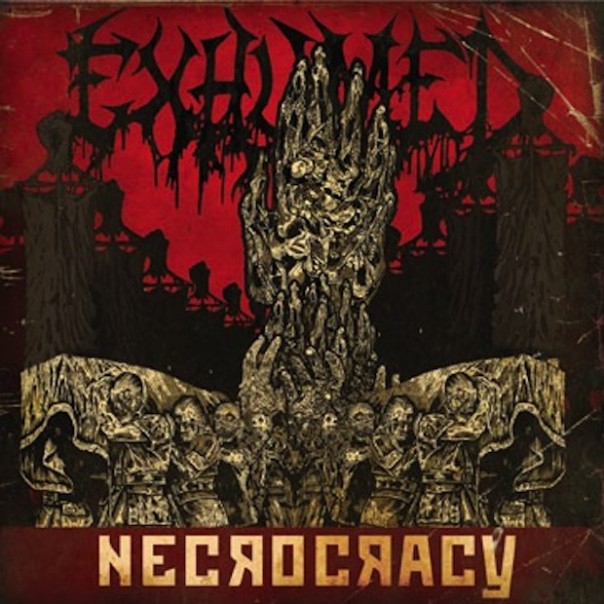 Northern California deathgrind masters Exhumed have been around for more than two decades in passing, but ever since they ended their five-year hiatus and resumed extremities in 2010, they’ve regained a reputation as one of the hardest-hitting and most constantly active bands on the metal circuit. Following the success of their fifth full-length album ‘All Guts, No Glory’ and the subsequent touring in support of it, they came out with the follow-up effort ‘Necrocracy’ earlier this year via Relapse Records. With this album, Exhumed have truly showcased their musical depth, sounding stronger and more dynamic than ever before with slower, groovier segments to go with their signature fast-paced grind. As a result, the album lends an unmistakable sense of variety to Exhumed’s live show which has certainly improved tenfold since the influx of the Necrocracy material. This 37-minute set of nine tunes not only pleases longtime Exhumed fans aplenty, but also successfully achieves the band’s objective of blending newer elements into the mix. Songs like ‘Dysmorphic’, ‘(So Passes) The Glory Of Death’ and ‘Ravening’ are prime examples of the progressiveness of Necrocracy as compared to previous Exhumed albums. Capitalizing on the sheer strength of this album, Exhumed have already destroyed stages worldwide since its release, and will continue to do so in the foreseeable future.

Track Listing:
1. Coins Upon The Eyes
2. The Shape Of Deaths To Come
3. Necrocracy
4. Dysmorphic
5. Sickened
6. (So Passes) The Glory Of Death
7. Ravening
8. Carrion Call
9. The Rotting