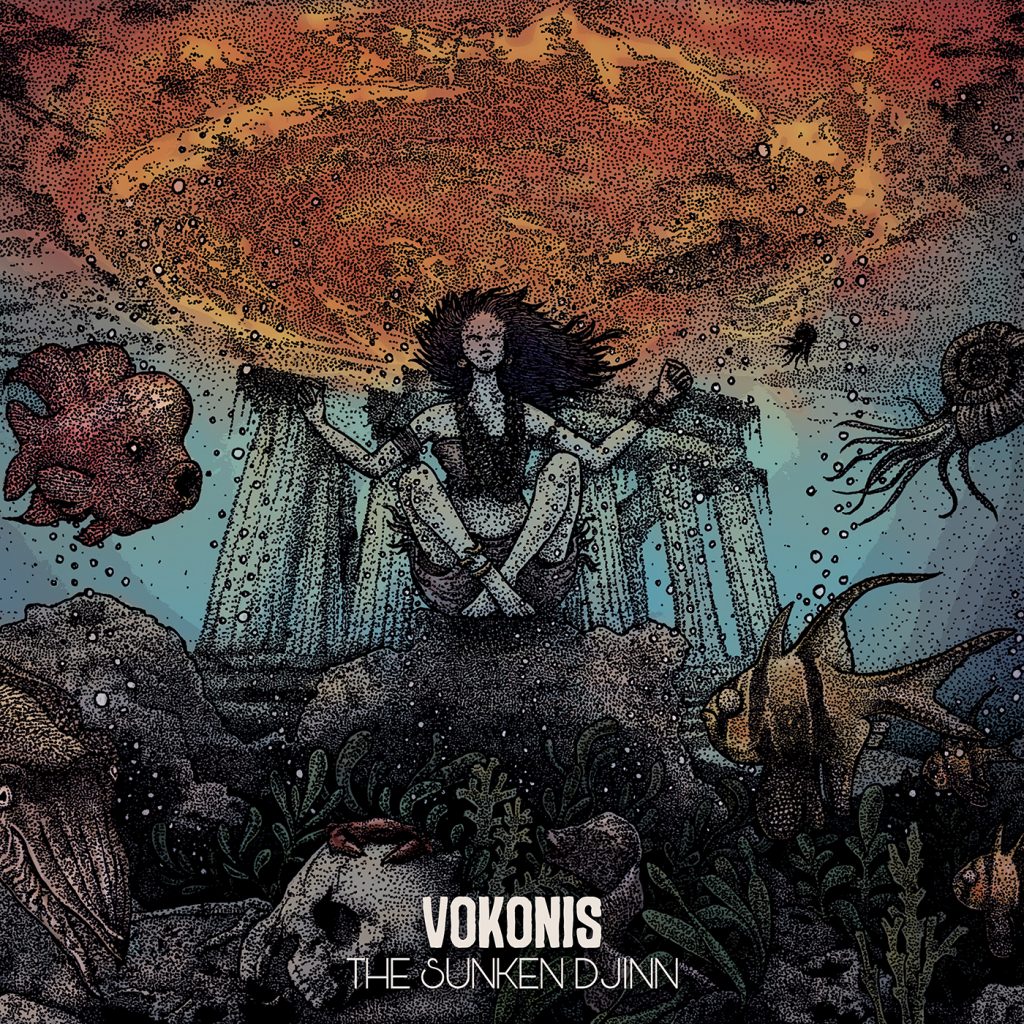 Like many releases from Ripple Music these days, there is a lot of anticipation surrounding the release of Swedish doom trio Vokonis and ‘The Sunken Djinn’. And just like many releases from Ripple, there is a lot to love about ‘The Sunken Djinn’ and the sonically crushing atmosphere present throughout the record. Vokonis has their roots deeply entrenched in traditional stoner metal within a more than competent infusion of modern metal elements.

First off, as much as I dislike making parallels to similar records or bands, it does help set up a good starting point for the descriptive imagery of the music. Vokonis has tendencies reminiscent of Bongripper with the high-energy stoner build of Mastodon’s ‘Crack the Skye’. Yes, I am aware that I often draw parallels to Mastodon when describing modern stoner metal. This isn’t out of laziness or a narrow window of reference, Mastodon just happened to set the footing for modern, aggressive stoner metal with their pre-‘The Hunter’ discography.

The music of ‘The Sunken Djinn’ is enamoring; the pounding, yet crawling musical aggression builds a strangely warm atmosphere. Vokonis doesn’t lay on the “extreme” side of stoner metal, and considering the genre, Vokonis puts up an above average tempo. One aspect of this album that truly stands out is the wall of sound provided by the vocals. The vocals are wide and dark with an oddly comforting essence; the dark warmth adding a million dollar icing to an already multi-layered luxury cake.

As gracefully brutal as Vokonis is with tracks such as ‘Calling from the Core’ they can flip it with straight up nasty riffage with tracks such as ‘Blood Vortex’. Vokonis plays both sides of the coin perfectly, offering a stoner metal presence that lays in the darker and more brooding edge of the spectrum while also providing much more aggressive, quicker hitting stoner metal. Despite the two approaches the music maintains a strong, cohesive atmosphere throughout the record. Vokonis takes a very interesting approach with the up-tempo stoner metal and the ingenuity pays off in dividends.

‘The Sunken Djinn’ is a record all fans of stoner/doom metal need to zero in on; it’s a highly fulfilling record that shifts around the typical elements of stoner metal to formulate a modern and creative approach to stoner/doom whilst maintaining the traditional feeling of the genre. Vokonis takes a soft push at the envelope, giving wonder to how far they can push the envelope throughout their career. Vokonis is a band you need to pay attention to, and on top of that, ‘The Sunken Djinn’ is a record you need to spin ASAP; Vokonis takes the envelope and nudges it forward ever so subtly. I can only imagine how much further they can push it throughout their careers.

‘The Sunken Djinn’ is a high quality stoner/doom record that demands your attention with brutalizing hooks and mixes of innovative, up-tempo doom. Vokonis sets a high bar for the record early on and delivers above and beyond, taking a traditional genre and nudging it forward with soft innovation until it becomes more than just stoner metal.