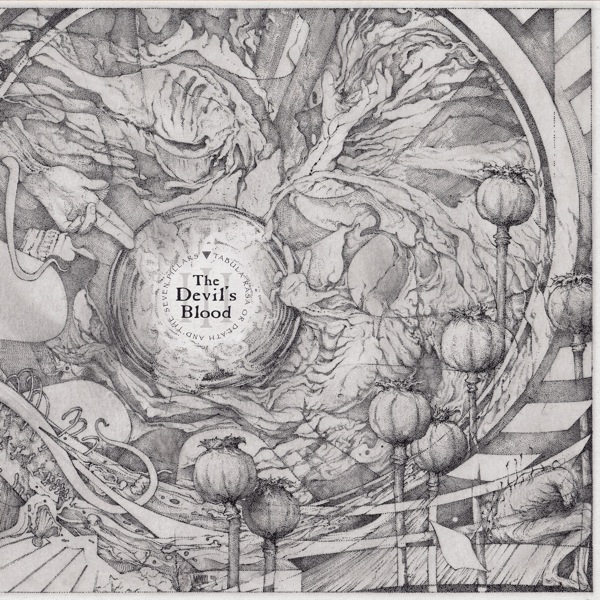 Earlier this year, Dutch occult rock band The Devil’s Blood put a sudden end to their young, fledgling career by announcing their disbandment, but soon after, their posthumous third studio album ‘III: Tabula Rasa or Death and the Seven Pillars’ was released via Metal Blade Records to provide closure for the band and a farewell to their cult fan base. The previous album ‘The Thousandfold Epicentre’ was a highly impressive work of creative genius that struck the right chord with fans of the genre, and based on the strength of that album, at the time the band’s career promised to grow into a massive entity. The fact that it didn’t quite materialize in that manner is a tragedy for those who admired The Devil’s Blood’s first two albums and live rituals, but it’s clear that band mastermind and main musician Selim ‘SL’ Lemouchi had an entirely different aim for The Devil’s Blood, and he felt he accomplished everything he set out to. This third album comes through almost as an encore and gives listeners a final dose of The Devil’s Blood’s atmospheric, ethereal brand of occult rock. SL has expressed himself to the fullest on this one and hasn’t held himself back within any kind of boundaries, as is evident from the opening track ‘I Was Promised A Hunt’ which clocks in 22 minutes on its own. The album as a whole is certainly more progressive and each track takes its time to build upon the emotion it attempts to convey. Aside from all the melodic elements including SL’s sister Farida Lemouchi’s incredible voice, the crisp guitar tone was one of the more enjoyable aspects of The Thousandfold Epicentre and it’s great to note that it’s still present to an extent in the new album, specially on the tracks ‘The Lullaby of the Burning Boy’ and ‘Tabula Rasa’. Overall, this is one of the finest releases of 2013, but is another one that doesn’t catch instant recognition and demands patience from the listener.

Track Listing:
11. I Was Promised a Hunt
– Part III: …and the Holy Cunt Spewed Forth Abomination…
– Part II: …Wielding the Hammer of the Dead…
– Part I: …Upon the Aimless Path…
2. The Lullaby of the Burning Boy
3. …If Not a Vessel?
4. In the Loving Arms of Lunacy’s Secret Demons
5. Dance of the Elements
6. White Storm of Teeth
7. Tabula Rasa