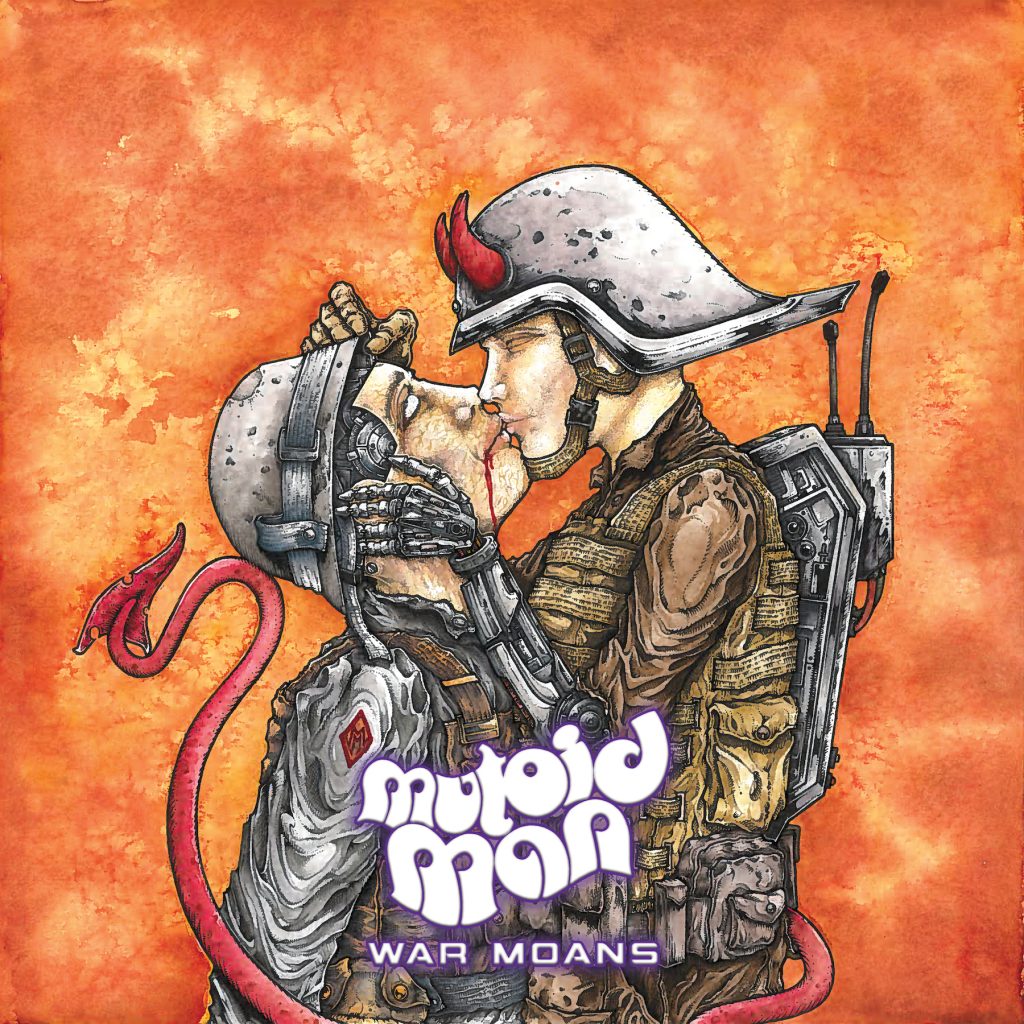 When it comes to music, words may sometimes fall short when describing the emotional elevation or over-achieving quality present within a song. Mutoid Man takes it to the next level with their sophomoric effort ‘War Moans’, taking the wonder that comes from trying to find words to fit your emotions and spreading it over an entire record. It’s not often a band injects all of their personality into their music, stripping the concerns of “what people like” vs “what we like” and creating a truly unique and inspiring record for lovers of metal across the globe.

‘War Moans’ opens with a killer track in ‘Melt Your Mind’; a fairly standard, yet incredibly catchy and thrashy modern rock song. The album has a killer opener, yet it doesn’t represent the best material the band has to offer. That’s not a knock on the track, it’s a whole mountain of praise on the band; they open the record with some A+ business and it still isn’t telling you the whole story. That’s some real fantastic stuff that does not happen very often in the music world in general, not just metal.

What really needs to be talked about here is Mutoid Man’s strange ability to transform thrash metal into something that maintains the distinctions of thrash while pushing the freshest take on the genre. ‘Micro Aggression’ takes a wonderfully atonal approach to the music; an approach in which this band’s talent truly shines. It’s thrash, it’s punk, it’s proggy; but most importantly it’s Mutoid Man. When the atonal elements strike through is when this record truly takes off, this is a beautiful mix for the metal genre.

Anyone would have a hard time subjecting Mutoid Man to a specific sub-genre because they are an amalgamation of various metal genres, songs like ‘Kiss of Death’ bring in stoner-prog a la early Mastodon while the title track ‘War Moans’ introduces the purest classic thrash metal track on the record. Marty Friedman happens to supply the title track with his talents, this addition being perfect as this specific track has a very ‘Killing is my Business…’ vibe mixed with some early Anthrax. The chorus of this track sees the band adopt “Load/ReLoad” vibes for a hot second, even the vocals take on Hetfield mannerisms; it’s pretty incredible.

You can tell a record is truly incredible if a review goes through the tracks individually and present cases as to why the tracks are worth your time. When a review just gives a basic overview of the album, even if it’s a good album, it may not be that special. Given the fact that I could throw down a 600 word review just for the track ‘Kiss of Death’ says more than I could about the record. This track sounds like it could come off the debut record for Mastodon, ‘Remission’, and it would have been the best track on the record. The lite-prog/stoner elements are enough to induce a terminal case of head-banging, but you’ll probably end up suffering a terminal case of “pissing off your neighbors” by blasting this track on loop all day.

There’s enough material on this record to run through each track and dissect it to explain its greatness, and at this point you just need to listen. ‘War Moans’ is the one metal record this year you need to buy, even if you have to sell everything else to be able to do so. If you can’t scrounge through your couch for enough change to grab a copy of ‘War Moans’, then indulge yourself in the video for ‘Kiss of Death’ over and over again until you can purchase this record.