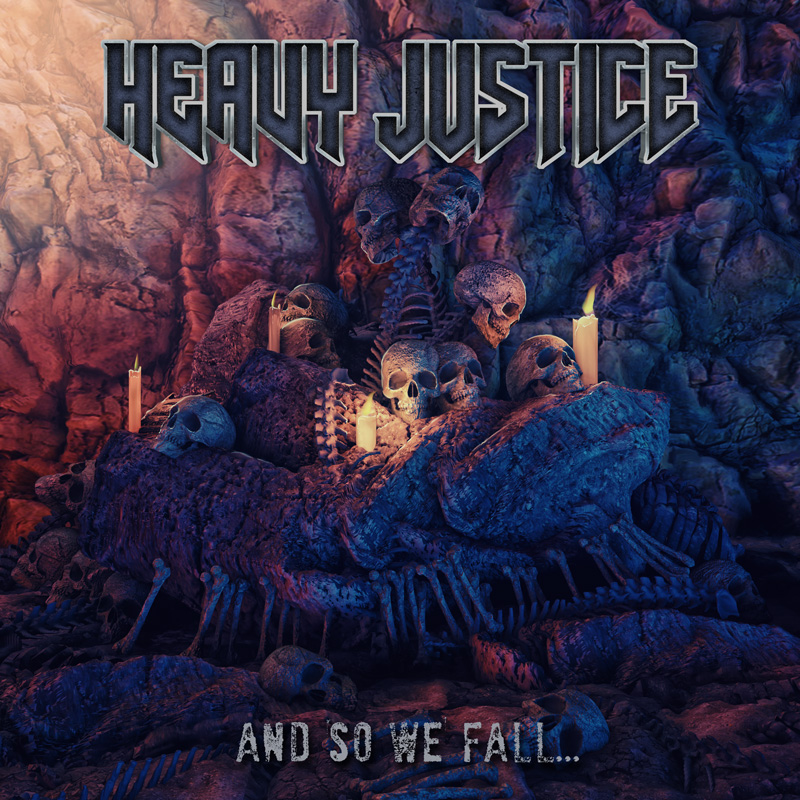 Blazing out of Los Angeles under the power of their sophomoric effort ‘And So We Fall…’ is the band Heavy Justice, who bill themselves as a thrash band, but to label them as purely such would be a disservice to the unbelievable dynamics present in this record. The ambition of Heavy Justice to launch themselves into unseen heights is palpable in their music; this record is a constant climax from the start to finish.

The opening track ‘Macabre Melody’ opens with a pretty slick speed metal intro before pulling the rug from under you and slamming an unbelievable heavy groove on top of your head. It has all the aggression of Anthrax’ debut record ‘Fistful of Metal’ with even more quality, not just with this track but the entire record. The second track holds the pace before slamming into hyper-drive with the third track ‘Davy Jones’. Do me a favor and go look back at the Metal Assault logo, because that explains what this song did to me better than any words could.

When you think Heavy Justice couldn’t throw you any more curveballs, they drop a huge dynamic change with the track ‘Mariana’; and I’ll be honest with you, it’s an extremely risky move. They go from the speed-devil monstrosity of ‘Davy Jones’ to a far more atmospheric piece that is strikingly similar to the that of Dream Theater’s  seventh record ‘Train of Thought’. It’s something that resonated very well with me; instead of taking the incredible speed thrash presence in the first third of the record and spreading it thin throughout the record, they switch the pace up with a far more harmonically driven lite-prog metal tune.

And then ‘Mercy’s Veil’ kicks in and turns that lite-prog into something fierce. It’s heavily reminiscent of tracks like ‘In The Name Of God’ and ‘As I Am’ from the aforementioned Dream Theater album. The thrash comes back to raise the feeling of “lite” prog into something that is so far beyond what you would have expected from the band from the opening tracks of the record.

‘Edge of the Inferno’ and ‘Mercy’s Veil’ are two of the more standout tracks of the record with ‘Edge’ bringing an instrumental power metal track into the fold. You shouldn’t be surprised that the dynamics and harmonies are on point with this song, given the band’s fluent dynamics present throughout. Writing an instrumental that strikes with such emotional force is difficult, you can’t take the easy route of having your singer present the emotional output of the music on a silver platter. Translating that with an instrumental track takes great skill, not only in ability but songwriting.

Heavy Justice brings it all together with the final track ‘Bone To Dust’, another high quality speed-thrash track. It’s a great song, but I can’t help but mention that ‘Davy Jones’ is by far the best speed metal track on this record by far. It’s a song I cannot get over and don’t see myself getting tired of any time soon.

One of the highlights of the record is the vocal work of Neil Moutrey; his Vince Neil style is a much-needed fresh take to a genre that tends to play with the same vocal throughout the genre. The dynamics behind the piercing, high flying vocals once again adds to the already overflowing cup of dynamo song writing. The steady, yet blazing drum work of Michelle Pickering runs with a style that would be all too welcome in the early days of Megadeth with Gar Samuelson and Nick Menza. On top of all that is the guitar work of Greg Mullen; his memorable riff writing is something that a lot of thrash bands lack.