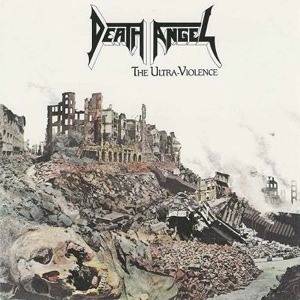 Starting out in 1982 in their early teenage years, Death Angel became one of the youngest bands ever to grace the metal scene, and it didn’t take them long to prove their worth as musicians, even at that age. The original lineup consisted of Rob Cavestany on guitar and vocals, Dennis Pepa on bass, Gus Pepa on guitar and Andy Galeon on drums, and they released the “Heavy Metal Insanity” demo in 1983. But the band’s lineup really became complete after the addition of Mark Osegueda on vocals, and the five-piece lineup’s “Kill As One” demo was released in 1986. In those glory days of tape-trading, this demo was primarily responsible for garnering widespread attention for Death Angel, and it was only a matter of time before the band took it to the next level. The debut full-length “The Ultra-Violence” came out on April 23rd 1987, and a thrash juggernaut was unleashed.

There was bound to be an unrivaled amount of aggression and passion in a group so young. But having raw aggression is one thing, and channelling it towards writing great thrash metal tunes is another. Death Angel succeeded on both counts, as is evident right from the intro riff of the opening song “Thrashers”. Even though the song exceeds 7 minutes in duration and is much longer than your average thrash metal tune, the relentless speed and intensity combined with the brilliance of the songwriting makes it a true thrash anthem. There is no chance for the listener to recover, as “Evil Priest” comes next at full force. The segment that follows the bass solo in this song has a build-up that can be compared to a freight train picking up speed, and for me it’s one of the best pieces of music the thrash metal genre has ever seen. Merely on the strength of “Thrashers” and “Evil Priest”, I’d put this album above most other thrash albums, but there’s a lot more to “The Ultra-Violence” than the two opening songs.

With tunes like “Voracious Souls” and the 10-minute instrumental title track, the band shows that even in the thrash metal of those times, there was room for technicality and depth in songwriting. While these tunes give the listener a chance to sit back for a few minutes and enjoy the sheer musicianship of the band, “Kill As One” and “Mistress Of Pain” provide plenty of opportunity to sing along with the chorus and indulge in mosh pits. The last two tracks “Final Death” and “L.P.F.S” aren’t talked about as much as the other songs on the album, but they’re as good as anything on here. While “Final Death” is a delightful mid-tempo tune with some memorable guitar riffs, “L.P.F.S.” is yet another killer instrumental piece that gives the album a fitting finale.

This is, without doubt, one of the greatest musical compositions ever. If this doesn’t define thrash metal, I don’t know what does. The impact and influence of this album can be traced in the music of various bands that represented this genre in the years that followed, but equally important is the fact that it laid a solid foundation for Death Angel at a very early age, and with time on their side, it was only inevitable that they would go on to achieve legendary cult status. Despite various lineup changes and a ten-year absence from ’91-2001, the band is now as strong and stable as ever, and “The Ultra-Violence” still very much remains a part of their lives, with “Thrashers”, “Evil Priest” and “Mistress Of Pain” being invariably included in their present-day set lists. Such is the quality of the music on the album, it will never leave Death Angel’s set list, and even after 25 years, it feels brand new. Death Angel’s “The Ultra-Violence” is indeed a timeless classic.