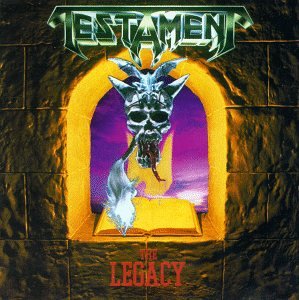 Twenty-five years ago on April 21, 1987, Testament released their debut album, The Legacy. Many fans still consider this one their best, and it’s not hard to see why. Unlike many thrash metal bands from the era, Testament’s sound was firmly established on their first record. Every track on The Legacy is stellar and shows a band confident in their playing and songwriting ability. By 1987, some of thrash metal’s most amazing albums had already been released. With records like Master of Puppets, Reign in Blood, and Pleasure to Kill in the market, Testament had a massive amount of competition that they had to match. With the release of The Legacy they did just that, and began a winning streak of albums that has yet to end.

Testament’s early history is very well documented, but I’ll provide a quick primer here. The original band, first called The Legacy, was formed by Eric Peterson on guitar along with his cousin Derrick Ramirez on vocals and guitar. After a series of lineup changes, the Legacy’s first stable lineup was composed of some of the East Bay’s best musicians. Eric Peterson, vocalist Steve “Zetro” Souza, bassist Greg Christian, drummer Louie Clemente and the young guitar prodigy, Alex Skolnick, made up this first lineup. After recording a four-song demo in 1985, Zetro was recruited to sing for Exodus. Zetro subsequently recommended his high school friend and one-time bandmate in Dublin Death Patrol, Chuck Billy, for the vocalist position. After a quick name change to Testament (a name that was credited to Stormtroopers of Death’s Billy Milano in The Legacy’s thank you notes), the band signed with Johnny Z’s Megaforce Records and finally recorded their debut album.

The album itself was made up almost entirely of songs written during Testament’s days as The Legacy. Six out of the nine songs on the album list Zetro as one of the songwriters, and C.O.T.L.O.D. even has Derrick Ramirez listed as a writer. This isn’t too tough to hear on the album; Chuck voice was much higher on The Legacy than it was on subsequent albums, likely because he was following vocal melodies written by Zetro. The only song Chuck had the chance to contribute to was Do or Die, but the other eight tracks were absolutely prime regardless, and remain among the best songs Testament has released. Alex Perialas’s production did the job well, giving Alex and Eric a massive guitar sound and bringing Chuck’s vocals to the front of the mix. Louie’s bass drums were given a pretty weak sound in exchange though, and Greg’s bass guitar was far less audible than it should have been. Greg was later given the opportunity to show off his immense talent on Testament’s next album, The New Order, but for now he could barely be heard.

Over the Wall is still one of the most badass opening tracks that any thrash metal album from the era ever had, and immediately established Testament’s strengths. Eric’s twisting and winding riffs became a signature of the band, and the song’s unpredictable structure was also a feature of many of the other tracks on The Legacy. Where other bands would be satisfied with only the riffs and melodies that opened Raging Waters, Testament would throw in an insane break like the one at the 2:47 mark and throw the listener into a furious fit of headbanging. Testament’s songs have never been too progressive, but they threw in more variety and interesting riffs into four minute songs that most bands couldn’t come up with for one album.

Nearly every track on The Legacy features a ton of shifting moods and speeds. Just check out the switch from the eerie intro of Apocalyptic City to its raging verse and again to a classically influenced dual solo from Alex and Eric to see what I mean. The most musically simple track on The Legacy, C.O.T.L.O.D., showcased Testament’s punk influences; even though it comes off as a bit of a filler track in comparison to the other amazing songs on this record, it’s still a fun snapshot of Testament as a young band hungry and willing to play faster than anyone else.

Besides the classic songs that littered The Legacy, perhaps the most notable element about this album is the soloing of Alex Skolnick. Despite being only eighteen years old at the time of The Legacy’s release, Alex immediately established himself as thrash metal’s single greatest soloist. His solos had the capability of being shredfests, but they oftentimes featured classically influenced melodies that kept his soloing grounded in melody. James Hetfield may have had the most influential right hand in thrash, and Gary Holt and Lee Altus may be the genre’s best all-around players, but there still isn’t a soloist today who can match Alex Skolnick. His playing on The Legacy was simply outstanding and took these already phenomenal songs to a whole new level.

It’s hard to pick highlights from a record so full of amazing songs. Over the Wall and Alone in the Dark are the only songs from The Legacy that are guaranteed a place in a live Testament show, but the rarely played songs from this album are just as great. The Haunting and Burnt Offerings still rip, and Do or Die remains one of Testament’s most underrated tracks. Eric himself has even admitted that the song contains some of his most difficult rhythm guitar playing. Raging Waters is another personal favorite of mine, along with the fiery Apocalyptic City. Hell, if I had my way I’d put nearly all of this album’s tracks in Testament’s live set.

The Legacy marked the beginning of an absolutely amazing heavy metal career that continues to this today. Testament may have been plagued by lineup changes, bad record deals and even cancer, but they’ve continued to write some of thrash’s best songs for twenty five years. The band may have topped themselves a few times over with subsequent albums, but The Legacy remains a thrash metal landmark, and one of the Bay Area’s greatest treasures.