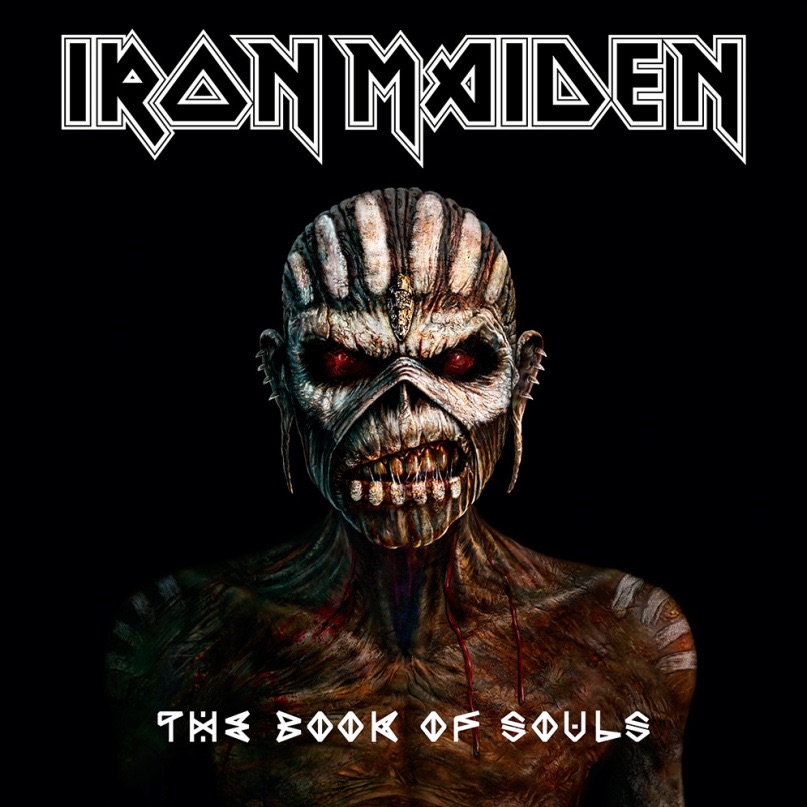 In the recent past, Iron Maiden have retained and enhanced their reputation as the ultimate heavy metal institution, triumphantly exploring newer territories and large-scale business ventures, such as touring the world in their own ‘Ed Force One’ jet flown by singer Bruce Dickinson and releasing the Trooper beer, but most importantly, through unmatchable live performances that have continually set and raised the standard for the genre. Since the release of their 2010 effort ‘The Final Frontier’ and the subsequent world tour, they finally put out an official release of the ‘Maiden England’ DVD and toured the globe again to bring back some of the selections from the 1988 ‘Seventh Son Of A Seventh Son’ tour, giving younger fans a much welcomed opportunity to get a taste of that era. Fast forward to 2015, Iron Maiden have completed a set of brand new tunes and the most important metal event of the year is upon us, as the band is ready to unveil their sixteenth full-length studio album, the double LP ‘The Book Of Souls’ on September 4th. Here is Metal Assault’s take on what listeners can expect from it.

To decide upon a 90-minute double LP taking into consideration the rapidly diminishing average attention span is audacious in itself, raising expectations and putting the album under greater scrutiny. But fans would be delighted to discover that in comparison to the 76-minute ‘The Final Frontier’, Iron Maiden have utilized the even larger sonic real estate to far greater effect on ‘The Book Of Souls’, as each of the eleven tracks distinctly stamps its authority while keeping the flow of the record intact.

The signature classic Iron Maiden traits, i.e. the guitar harmonies, the solo tradeoffs, the galloping rhythms and the masterful wide-ranged clean vocal delivery, as well as more recently acquired qualities such as epic drumless intros/outros are evident right from the get-go, as the opening track ‘If Eternity Should Fail’ singlehandedly delivers everything the fans have eagerly waited for since the previous release. This delightful 8-minute mid-tempo piece, potentially the ideal opening item on the band’s next tour set list, leads straight into the lively ‘Speed Of Light’. This track was released as a single which makes perfect sense as it is the poppiest composition on the album, but it certainly makes a better impact as part of the 11-track set than it does on its own. Listeners that could not appreciate the single need not fret, because in all honesty, the other ten tracks are all superior.

‘The Book Of Souls’ then delves into some heavily dynamic, progressive tunes such as ‘The Great Unknown’ and ‘The Red And The Black’, the latter emanating a richly symphonic vibe that Maiden carries with great aplomb, as Dickinson reaches new vocal heights in his successful attempts at sonically standing head and shoulders above all of these layers. ‘When The River Runs Deep’ and ‘Death Or Glory’, come across as the catchiest, fastest and grooviest offerings on the record and will become fan favorites over a period of time, while the all-encompassing title track justifies its central positioning. ‘Shadows Of The Valley’ treats listeners with the album’s most memorable riffs and solos. ‘Tears Of A Clown’, the heartfelt tribute to recently fallen legend Robin Williams, is lyrically poignant, and the ballad-like ‘The Man Of Sorrows’ offers some soaring vocal and instrumental melodies. But more than anything, all of this serves as a glorious buildup to the final item, the longest Maiden written till date.

Solely composed by Bruce Dickinson, the 18-minute opus ‘Empire Of The Clouds’ is stunningly brilliant, as Dickinson pours every ounce of his creative genius into this composition. The introductory segment of the track is beautiful, from which it goes through a progressive sequence of masterfully written and arranged musical highs and lows. The patience of those that can give themselves a chance to absorb this tune in full shall be rewarded, as the enormity of its quality matches its size, and one can only imagine how overwhelming it would be if it were to be performed live.

Iron Maiden have always been heralded as the undisputed forerunners of the New Wave Of British Heavy Metal but in recent years have expanded far beyond all that entails the style of music, showing epic progressive songwriting tendencies in various tracks on albums such as ‘Brave New World’ (2000), ‘Dance Of Death’ (2003), ‘A Matter Of Life And Death’ (2006) and ‘The Final Frontier’. But, while retaining the classic elements, Iron Maiden have taken this progressive quality to unprecedented extremes on ‘The Book Of Souls’, so much so that they could even be categorized as a progressive metal band in the oncoming phase of their never-dwindling career.

‘The Final Frontier’ was perhaps a disappointment in terms of the lyrical content and the songwriting, but ‘The Book Of Souls’ succeeds wherever its predecessor failed, and in contrast to that album, it will make an instant impact on listeners, even though it will require above-average levels of patience and attention. It is emphatic vindication of Iron Maiden’s initiative to go with their longest ever album at this stage of their career. It is a leap of faith in their own abilities as well as the loyalty of their fan-base, and judging by the output, there is every indication of its world-conquering success through the impending release and tour cycle.

The verdict? ‘The Book Of Souls’ is Iron Maiden’s finest effort since the near-flawless ‘Brave New World’. It encapsulates and expands latter-years Iron Maiden stylings and is in many ways reminiscent of the albums released in the 21st century. ‘The Book Of Souls’ gives the impression that it has been in the making for the past decade or more, as the songwriting team of Steve Harris, Bruce Dickinson, Adrian Smith, Dave Murray and Janick Gers have expressed their individual and collective creativity in a manner not as apparent in the past, while the performances and the production remain as supreme as ever. Iron Maiden fans can rejoice, because with ‘The Book Of Souls’, the band has struck gold.