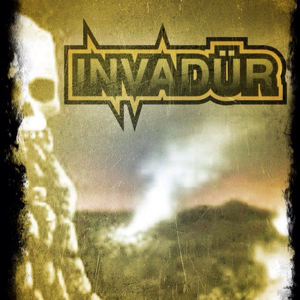 On my most recent BandCamp exploration earlier today, I went into the ‘classic metal’ tag and decided to check out what the site had in store for me this time. In the list of most popular classic metal releases, the name ‘Invadür’ caught my eye first, and upon visiting the band’s page, I discovered they had just self-released an eponymous album, digitally on BandCamp itself. This album was recorded in Medford, Massachusetts (US) last month, where it was tracked live to 2″ tape, and then mixed to 1/2″ tape in a 100% analog process. This heightened my curiosity further. I went to their facebook page and learnt that they started out only in late 2011, and that this is their debut album. There is no location mentioned on their facebook, but since they recorded in Medford MA I’m assuming that’s where they’re based out of. Looking at the band’s classic one-word name (complete with the umlaut in the name a la Motörhead and Mötley Crüe), the logo, the album art, and the vintage four-piece lineup of one vocalist, guitarist, bassist and drummer, Invadür ticked all the right boxes, and they came across as proper old-school to me. Now, it was up to their actual music to deliver the goods and live up to the expectation built up in my mind.

The 7-track effort starts off with a 2-minute instrumental intro, which wastes no time in laying the groundwork. Massive clean riffs, exciting solos and a very crisp rhythm section in this intro points to the early Maiden school of music, and sets the tone excellently for the following tunes. But interestingly, the title track comes next and changes up the musical vibe from a Maiden-esque sound to more of a lively hard rock type thing. This is mainly achieved due to Joe Bastek’s vocals, as they bear a strong resemblance to the likes of Udo Dirkschneider and Bon Scott. The band keeps things simple and efficient, and the musical style of this title track is maintained for the rest of the album, on tunes like ‘Headsman’, ‘Black Leather’, ‘Midnight Queen’ and ‘Deal Breaker’. These fast, heavy, catchy tunes definitely keep the classic metal/hard rock fan well-satisfied throughout, and I can’t think of anything more a fan of the genre can ask or expect from this set of tunes. ‘Vikings On Motorcycles’ slows things down and offers a nice variation to bring the album to an end. 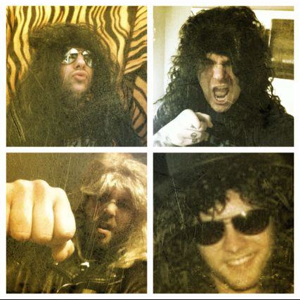 I can definitely feel the impact of the analog nature of this recording, even though I’m obviously listening to its digitally converted form. It’s very organic-sounding, gives you a ‘live’ feel and pretty much converts your room into a concert venue in that sense. The crispness of the sound is extremely enjoyable and does justice to each of the four musical elements of the band. Music-wise, guitarist Sean Haidul, bassist Joe Richner and drummer Scott Smith have done a fantastic job, keeping it true and old-school. It’s more about the combined effort and the inner band chemistry rather than individual wizardry here. I just wish the album was a bit longer than its 24-minute duration, and other than that I don’t really find any flaws here that I can specifically point out. I think the album is perfect for vinyl, and will surely sound even better on that format.

They’ve just started out as a band a little over a year ago, and from the looks of it, they’ve even younger as an internet entity. I hope for their sake that the album gets heard by people all over the world, and I’m doing my job by featuring it through this review. I foresee them to be an instant success in places like Europe, South America Japan, where music listeners tend to go solely by what they find enjoyable, and don’t necessarily bother about the other things that North Americans often do.

If you’re a fan of old-school hard rock and heavy metal, I’d strongly encourage you to visit Invadür’s BandCamp page, turn up your volume and listen to this album. You will not regret it.