In their continual pursuit to support old school hard rock and heavy metal, Nuclear Blast Records have unearthed yet another potential gem. Swedish classic hard rock quartet Free Fall recently signed to the label and are now all set to release their debut full-length album titled ‘Power & Volume’. Hitting stores in Europe tomorrow February 22nd, in the UK on February 25th, and in the USA on March 19th, this is the band’s first effort at presenting what they describe as ‘freedom rock’. The country of Sweden never ceases to amaze me with the sheer multitude of heavy rock and metal bands it keeps on producing. Free Fall is the newest one to be introduced to us, and based on this set of tunes, it’s safe to say that they’re not here to simply make up the numbers.

A lot of young bands attempt at reinvigorating the classic 70s hard rock sound, and most of them just end up sounding almost exactly like AC/DC, and regardless of whether you’re a fan of AC/DC or not, this is not really what you’re looking for as a listener when you check out a band you’ve never heard before. Thankfully, Free Fall do not come under this category and while their music does showcase the AC/DC influence in some parts, the band has managed to come up with something they can call their own.

The album kicks off with the title song, a song that has already been released and circulated for the past couple of months, and it has become somewhat of a signature Free Fall tune by now. This one oozes with classic rock ‘n roll at its finest, and the production style gives it a very vintage feel. Kim Fransson’s raspy, high-pitched vocals immediately make you yell out the good ol’ “Fuck Yeah!” and raise your horns. His band mates play their part as well, and Mattias Bärjed lays down some tasty licks on the guitar. The rhythm section of bassist Jan Martens and drummer Ludwig Dahlberg sounds a bit dry on this one, but I think that’s something they’ve done only to fit the atmosphere intended for this particular song, and it’s not a characteristic shared by the other nine tracks. 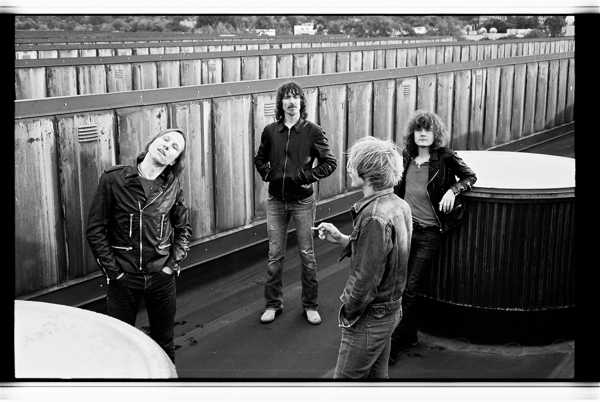 The high-energy opening tune leads into the relatively easy-going ‘Free Fall’ which offers more in terms of tempo changes and depth in musicianship. In contrast to ‘Power & Volume’, the bass and drums sound wonderfully crisp on this one. The album continues to go from strength to strength, and each tune offers something different. This is rare for an album of this style, and usually there’s the drawback of songs sounding too similar to each other. This Free Fall album doesn’t have this problem, and I was very much surprised to hear the amount of variety offered from song to song.

After two more sonically rich, rocking tunes ‘Midnight Vulture’ and ‘Top Of The World’, you get to the centerpiece of the album ‘Attila’. This one amazes me with its exotic vibe and it completely changes the feel of the album with some excellently thought-out and well-arranged musical passages. Fransson also shows a greater range of vocal ability, and overall this tune completely utilizes the talents of the four musicians. ‘World Domination’ keeps the exotic feel going but picks up the pace slightly. Its main guitar riff is extremely catchy, and it singlehandedly drives the song for the most part. ‘Love Bombing’ takes the album back to the fun rock ‘n roll’ vibe created by the first few songs, but in another contrasting move it’s followed by the slow, heavy rocker ‘Damnation’. The bass is absolutely killer on this one and when you compare this sound to the opening tune, you wouldn’t even believe that they are on the same album. The album doesn’t let go of the listener until its final moments and ends out with two more solid tracks ‘Meriola Blues’ and ‘Meat’.

Free Fall seem to have made the perfect start with this album. The four-piece, one-guitar lineup is the ultimate epitome of a classic heavy rock band, and with this exact type of lineup, I think Free Fall do things in the right earnest. As mentioned earlier, the abilities of all four members has been utilized to the fullest, and their combination gives you a very organic, ‘jam room’ type of feel, showing the chemistry and the comfort level these guys have while working with each other. But besides that, their actual compositions have the strength to hold fort amongst the plethora of ‘classic rock revival’ bands that are in abundance today. They’ve managed to take inspiration from the rock idols and come up with their own interpretation which isn’t a blatant rip off of anything. They don’t sound like any band other than Free Fall, but any classic rock fan would be able to identify with their music instantly.

The guitar tone is pure vintage, and comes across in a clean and crisp manner which highlights Bärjed’s playing to perfection. As for the lyrics, it was interesting for me to note that they suit the feel of the particular song and change accordingly during the album. The more fun-filled tunes have the ‘easier’ lyrics while tunes such as ‘Attila’, ‘World Domination’ and ‘Damnation’ have deeper lyrics. Overall, as a listener I’m satisfied with how the album is produced and mixed. There doesn’t seem to be a deliberate attempt to make it pseudo-vintage, and I think the old-school nature of the sound goes genuinely with the musical landscape the band is attempting to create.

For fans of classic hard rock, Free Fall’s ‘Power & Volume’ is an absolute must. A fantastic debut without a doubt!