Based out of Greenfield, Massachusetts, Lich King have been around since 2004, and through previously released studio albums “Necromantic Maelstrom”, “Toxic Zombie Onslaught”, “World Gone Dead” and “Super Retro Thrash”, along with some raging live shows played predominantly around the US East Coast, they have become cult heroes in the modern American thrash metal scene. They released their fifth studio album “Born Of The Bomb” on September 28th of this year, all on their own. I’ve never seen the band live, unfortunately, because they didn’t play any shows in LA while I was there. But, I’ve always kept in touch with their music itself, and based on their previous releases I’d say there aren’t many better bands around today when it comes to straight-up retro thrash. So, with the very recent release of this album, I thought this is as good a time as any to finally give them some well-deserved coverage on this website.

The 50-minute album begins with the short intro “All Hail”, which kicks off the album aptly, and it would make a great stage intro too. From the next track onwards, all hell breaks loose and the album is filled to the brim with unrelenting, unadulterated thrash. “We Came To Conquer” showcases this to perfection, with catchy riffs and choruses, blistering solos, fast-paced drums, and high-pitched lead vocals. This song really sets the tone and puts the album into gear, so to speak, and gains further strength and power with tunes like “Wage Slave”, “In The End, Devastation” and “Fan Massacre”.

The longest tune on the album “Agnosticism” serves as the breaking point and center piece of the 50-minute effort, and stands out on its own in terms of its musical content in comparison to the other 9 tracks. This is a slow tune with a lengthy buildup, but gives us a chance to really absorb the fabulous guitar work of Rob Pellegri and Joe Nickerson. Things get back up to speed with “Combat Mosh” and “Axe Cop”, following which there’s an excellent cover of Agent Steel’s “Agents Of Steel”. Now if that’s not old-school, I don’t know what is. They’ve done a tremendous job with the song, and it’s a great addition. They’ve not only paid tribute to one of their influences, but also succeeded in picking a tune that fits in with the flow of this album. The title song “Lich King IV (Born Of The Bomb)” brings a fitting end to this thrash avalanche. 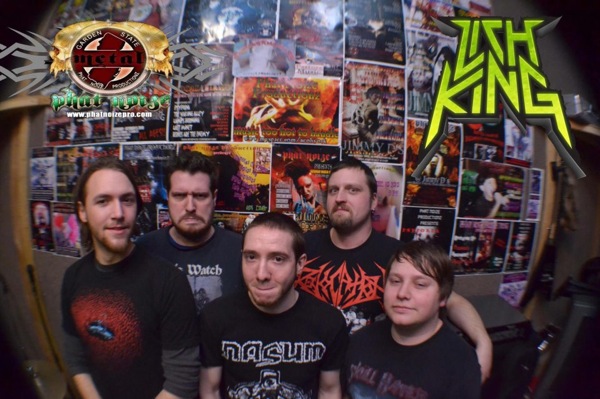 All in all, I don’t think we have heard or will hear a better thrash album than Lich King’s “Born Of The Bomb” this year. Even though the music on it is very much beer-fueled and sounds all the more enjoyable after downing a few pints, it’s not exactly Municipal Waste-style party thrash. There’s a greater degree of intensity and aggression to it. It’s meant for some good old-fashioned head-banging, moshing and singing along to the chorus lines with fists raised high.

Granted, the band isn’t reinventing the wheel, but they’re clearly playing the kind of music they enjoy listening to, and I don’t see anything wrong in doing that. They are the first ones to admit that their sound is similar to bands like Exodus, Vio-lence and Slayer, and I’d prefer listening to a band like Lich King who admits it rather than other bands who claim to be original but really aren’t. How some of those bands are signed and Lich King aren’t is beyond astonishing to me. Without going to the extent of being a rip-off band, Lich King have given a new life to American thrash metal of the 80s, and they are doing a bloody impressive job at it. “Born Of The Bomb” is a classic example of it, and is a must-have for all fans of the genre. Quintessential retro thrash at its very best!