The legendary New Wave Of British Heavy Metal movement of the late 1970s gave rise to some of my favorite music, and even today, it doesn’t cease to amaze me. Over the past couple of years, that era has seen somewhat of a resurgence, with the reincarnation of Tank in 2010, Saxon touring North America in 2011 after a long time, and Angel Witch releasing their new album this year, their first after a gap of 14 years. Now it’s the turn of Savage, who have reunited after a 10-year hiatus and have come out with their sixth studio release “Sons Of Malice”. Formed in 1979 by bassist/vocalist Chris Bradley and guitarist Andy Dawnson, teenagers at the time, the band gained recognition in their early years through songs like “Let It Loose”, which was also covered by Metallica for their pre-Kill ‘Em All demo recordings. Fast forward to 2012, Savage is back to present some of the very same musical elements that made them an influential band in the early days, but with a modern touch.

Chris Bradley’s voice has shown no sign of aging whatsoever, and he sounds as crisp and lively on this album as he’s ever done. His voice combines with Andy Dawson’s guitar riffs and tone to recreate the distinct Savage sound that separates them from the other bands of the NWOBHM movement. But interestingly, even though they’ve retained this signature sound, they’ve approached the songwriting for “Sons Of Malice” with a modern outlook. Compared to their early albums, their musical style on this album is definitely more towards the hard rock side of the genre spectrum, which is actually a good thing because it presents something fresh to the listeners and doesn’t drift into the type of music that’s already been released many times over by fellow NWOBHM bands. 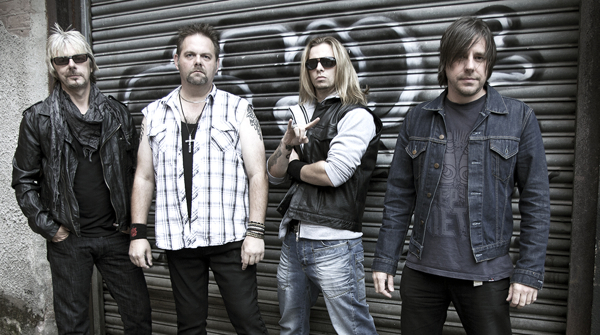 The 13-track album has quite a bit of variety, ranging from upbeat mid-tempo tunes to slower, groovier ones, with a couple of fast-paced songs thrown in the mix as well. Amongst the more groove-oriented tracks, “Black ‘N Blue” is one of the highlights of the album as the song structure allows the listener to absorb and enjoy every musical component. It’s reminiscent of Bon Scott-era AC/DC in some ways, which is never a bad thing for any rock lover. The title song is another great slow number on here, which revolves around an instantly catchy guitar riff. It really is the quintessential hard rock tune, and is an excellent representation of the album, and indeed the band.


“Waking The Dead” is most certainly my favorite track on the album, though. The fastest, most aggressive tune on the album, this one has tremendous repeat value, and I simply can’t get enough of it at the moment. Upon listening to it, I’m sure most people will agree with me. The vocals, the riffs, solos, and the rhythm section, everything is just dead-on perfect. Take my word for it, this song alone is worth the price of this album.

With that being said, there are definitely other worthwhile tunes on the album, such as “Monkey On My Back”, “Blow” and “Now”. The only aspect in which the album falters sightly is the overdose of the mid-tempo songs. I feel they could have done without one or two of those. But other than that, this album serves as a delightful treat for all hard rock and heavy metal fans. The production and mixing is top notch, and makes this the band’s most polished album till date. If you haven’t heard it yet, I strongly recommend you to pick it up.

Savage have undoubtedly made a successful return, and with an album as strong as “Sons Of Malice”, their decision to make a comeback has been vindicated.