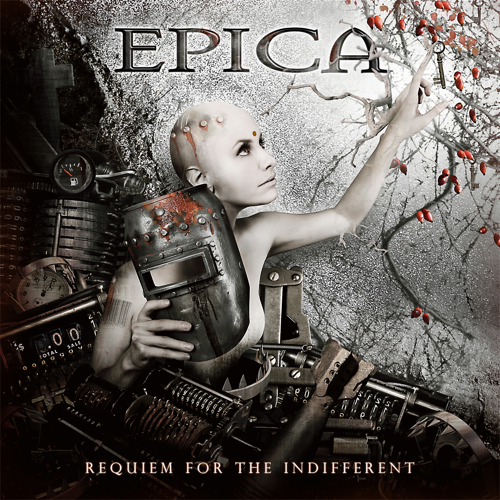 Female-fronted Dutch symphonic metal band Epica have released four studio albums so far, and I have enjoyed the direction they’ve progressed towards in their last two albums. While “The Divine Conspiracy” was heavier and much more balanced than the first two full-length releases, “Design Your Universe” took things to the next level, and I felt the band achieved their most perfect sound on that album. It was heavy and progressive, but had the symphonic element at the same time, and it definitely transcended Epica beyond the realms of being a mere symphonic metal band, although there was still plenty in it for the goth/symphonic fan to enjoy. Now, the band is ready to release the fifth studio album “Requiem For The Indifferent”, and I’m delighted at finally getting a chance to find out whether Epica has successfully carried out the hard task of creating a good follow-up to their previous album.

Like all other Epica albums, this one also starts out with a short intro titled “Karma”. This symphonic piece builds up the anticipation and creates an atmosphere that’s typical of Epica’s music, leading into “Monopoly On Truth”, a brutal, all-guns-blazing tune excellently complemented by Simone Simons’ ethereal vocals. Mark Jansen’s guitar riffs are as prominent as the vocals on this one, which I have absolutely no complaints with, and the occasional death growls add further punch to the tune. Epica fans will be taken aback by how heavy this track is. “Storm The Sorrow” starts out as a song that’s quite typical of the musical style Epica have employed on previous albums, but I was completely surprised by the extremely heavy, almost breakdown-like segment towards the end of the song, and it gives the song an identity all of its own. These 30 seconds alone make the song repeat-worthy.

“Delirium” is a slow, soft, ballad-type tune which brings about a nice change-up, and a chance for Simone’s vocals to take center stage, after which the highly intense “Internal Warfare” sounds like a harsh wake-up call from the peaceful ballad. Once again, Mark’s contribution with the death growls makes this an absolutely killer tune. Things get a lot more progressive in the title track which comes next, and this one has a bit of everything. It starts out in a very exotic manner with the use of some interesting instrumentation that hasn’t been heard on previous Epica albums, then moves to a typical symphonic metal sound, followed by a ballad-type section and ends with a surge of death metal. This is a truly amazing tune, and even though there are shorter, catchier songs on this album, musically this one is by far the best.

The piano interlude “Anima” is followed by the dark and epic-sounding “Guilty Demeanor”. The next track “Deep Water Horizon” starts out as a slow ballad but picks up pace gradually and it’s second half is quite brilliant, which some very well crafted guitar solos. “Stay The Course” is another extremely well-crafted tune. At times, it’s heavy enough to be classified as straight-up death metal, and that’s something I really enjoy, not only on this track but on the whole album in general. Next up, “Deter The Tyrant” does everything the album has done so far, and then some, with a little acoustic guitar segment thrown in for good measure. “Avalanche” is very progressive, and quite similar to “Deep Water Horizon” in its gradual build-up, and finally, the final song on the album “Serenade Of Self-Destruction” takes a while to pick up pace, but once it does so, it’s nothing short of amazing. It justifies it’s title perfectly, and is almost like a musical story within itself. 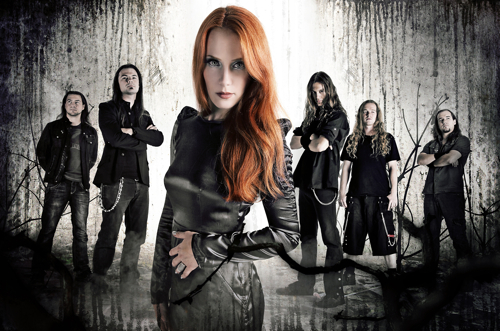 Honestly, I have to say, I’m surprised by how great this album is. I expected Epica to come up with an album as good as “Design Your Universe”, but this one is ahead of it by leaps and bounds. It’s much more progressive and dynamic, the heavy parts have become heavier and the symphonic element has become even richer. Of course, Simone Simons’ voice gets better on every subsequent album, as is proven on this one. Mark Jansen has completely outdone everything he did on previous albums, and his musicianship as well as death growls have reached a new level. Having said that, the rest of the band members are not far behind by any means, and collectively they have created what has turned out to be the best album of Epica’s career in my opinion.

Epica’s “Requiem For The Indifferent” comes highly recommended from me. While it is an absolute must-have for all Epica fans, even if you’re not an Epica fan, this album might well change your mind, such is its awe-inspiring brilliance. This is indeed a splendid effort.