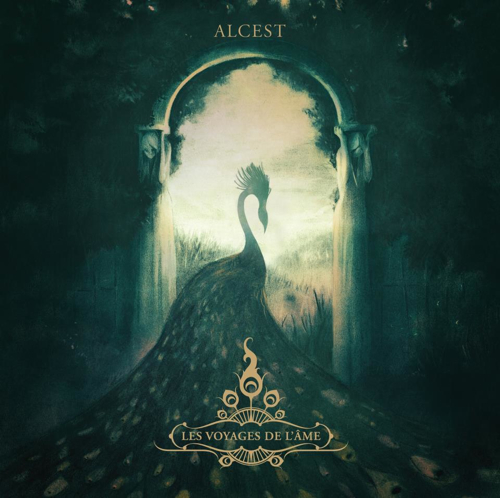 French atmospheric black metal band Alcest are ready to release their third full-length studio album titled “Les Voyages De L’Âme”, which translates to “Journeys Of The Soul”. After seeing the band open for Enslaved last October in a very intimate setting at Hollywood’s Troubadour, I was curious to see what they’d do on their next album. And now that I’ve listened to this album a few times, I can safely say that it’s musically quite close to what I expected from it.

It starts off in a very melancholic manner with “Autre Temps”, but its following track “Là Où Naissent Les Couleurs Nouvelles” is where we get first taste of the musical gamut that best represents this album. While it still has a melancholic feel, the vocals and music in certain segments boast of the aggressive element that should keep the extreme metal fans happy. This track is a very intricate composition, and I commend Neige for the songwriting here.

The title track comes next. Once again, the atmosphere created by the first two tracks keeps going on this one, but the extremely rich guitar sound certainly makes it one of the most powerful tunes on the album, and has an instant impact on the listener. It flows into the next track “Nous Sommes L’Emeraude” which is similar in style but is shorter and more compact. “Beings Of Light” brings back the aggression from track #2, but it goes through a minute-long build-up before getting there. I think this creates tension and anticipation which is then released through the relentless barrage that the song turns into once it hits top gear.

“Faiseurs De Mondes” slows things down once again but the harsh vocals ensure that the intensity doesn’t fade, and very gradually, the song picks up pace and reaches a crescendo in its last minute or so, a very enjoyable segment without a doubt. In complete contrast, “Havens” is a very short, quiet and beautiful piece that leads into the final track “Summer’s Glory” is much along the same lines musically, with completely clean vocals on top of it. This ending is in close relation to the opening tune, and thus ties the whole album together excellently. When I hit ‘play’ on the album all over again, “Autre Temps” almost sounds like a continuation of Summer’s Glory rather than a fresh start.

When I try to think of any possible flaws this album might have, I fail to come up with anything I can point my finger at. Alcest have shown their class as musicians on this album. While each of the eight tracks definitely sound like they belong to this album, each one has an identity, a musical style and song structure of its own. At this point, my favorite song is the title track, along with “Faiseurs De Mondes”, but there isn’t a single tune on here that I dislike.

The most interesting thing to me is the varying degree with which the aggressive and mellow sections have been combined together. It ranges from completely clean and melodic to relentlessly harsh, and everything in between. While there’s enough here for black metal fans to appreciate, I would say a sizable portion of the album is ambient borderline metal, which should succeed in exposing Alcest to a wide range of listeners.

The title of the album is very apt, because it really is like a journey of the soul. Dreamy, thought-provoking, and captivatingly brilliant.