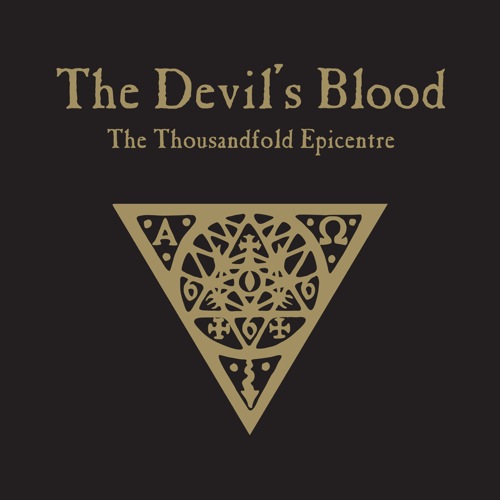 Having already gained widespread acclaim with its European release on 11.11.11, “The Thousandfold Epicentre”, the second full-length album by Dutch occult rock band The Devil’s Blood, will hit US stores on January 17th 2012 under the Metal Blade label. Their debut full-length “The Time Of No Time Evermore” piqued my interest, and I was expecting great things from this new album. But after listening to “The Thousandfold Epicentre”, I was taken aback by how amazing it sounded even at first listen.

The lyrical themes are based on Occultism and Satanism, but the music itself sounds nothing even close to black metal. In fact, I wouldn’t even call it extreme metal. It seems to be largely influenced by psychedelic rock and hard rock bands on the 60’s and 70’s, while it also boasts of elements of the New Wave Of British Heavy Metal. But the female vocals give it the ritualistic feel that justifies its subject matter. It is this aspect that isolates The Devil’s Blood from bands that play a similar musical style, and this is what makes them unique. In my opinion, the female vocals not only fit the music perfectly but also amplify its impact on the listener. As for the music, the guitar tone is extremely solid, crisp and melodic, and together with the vocals, it manages to take the listener on a dark, powerful journey.

The haunting 2-minute intro “Unending Singularity” creates the perfect atmosphere as it gives way to “On The Wings Of Gloria”, which is the start of this amazing journey. This one has a Floyd-esque feel to it. Through this tune, the album captures my attention straightaway and doesn’t let go of its grip until its final track. It actually gets better and better with each track till it reaches its centerpiece, the title track. On “Die The Death”, F’s vocals really remind me of Ronnie James Dio, and the tune carries a strong Rainbow vibe to it. It flows beautifully into the next track “Within The Charnel House Of Love”, which exudes a similar vibe but also adds touches of the New Wave Of British Heavy Metal by the use of multi-layered guitar riffs that sound very much like guitar harmonies. As if all this wasn’t already enough, the percussion makes it a sensual, exotic and spellbinding tune.

The album never ceases to surprise and amaze, as is apparent from “Cruel Lover”, which has a pretty distinct European glam metal feel to it. “She” is another Rainbow-esque tune, extremely catchy and highly enjoyable. It leads into the 9-minute title track, which builds up very gradually but when it does, it sounds so stunningly rich and powerful that it’s impossible to not like it. “Fire Burning” serves as the perfect follow-up to that epic tune, and the album ends with three more lengthy tunes “Everlasting Saturnalia”, “The Madness Of Serpents” and “Feverdance”. These take the album into a different direction altogether, and slow things down to a standstill. It’s an interesting way to end the album, and it feels almost like the ending is connected to the beginning, because “Unending Singularity” pretty much sounds like a continuation of “Feverdance”.

My only issue with the album is actually “Feverdance”, a 15-minute long track. It’s way too long and it kills the impact of its preceding 10 tracks, albeit to a small degree. If it was half its length, things would have been perfect and this would have been a 10-out-of-10 album in my book. But other than that, it really is a stunningly brilliant musical offering, and if you are a fan of any of the aforementioned bands I compared this music to, you’ll love this album. For me it turns out to be a wonderful journey every time I listen to it, because not only does it gives me something unique, but also because it makes me reminisce some of the legendary music I’ve always loved and been a huge fan of. “The Thousandfold Epicentre” will end up as one of the most captivating releases of the year 2012. A superlative effort.

Track Listing:
01. Unending Singularity
02. On the Wings of Gloria
03. Die the Death
04. Within the Charnel House of Love
05. Cruel Lover
06. She
07. The Thousandfold Epicentre
08. Fire Burning
09. Everlasting Saturnalia
10. The Madness of Serpents
11. Feverdance