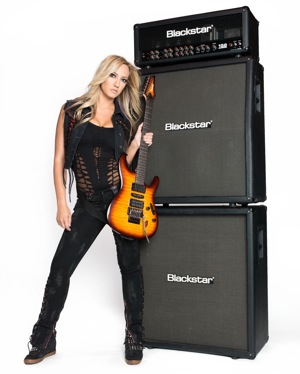 Besides his classic tunes and theatrics, shock rock legend Alice Cooper has always had a reputation of recruiting greatly talented musicians to partake in his band, and when it comes to the live show, which is by no means solely reliant on the theatrical aspect alone, the musical abilities of his band members are of huge importance. Los Angeles-based guitarist Nita Strauss, previously known for her involvement in world famous all-female Iron Maiden tribute band The Iron Maidens along with acts such as Femme Fatale, Critical Hit and several others, is the newest to tackle the challenge of living up to the Alice Cooper band’s legacy and is currently scorching stages with them across the North American continent. Yesterday (Thursday July 31st), I had a chat with her over the phone and talked about all things Alice Cooper. Enjoy the conversation below.

Nita, it’s a pleasure to finally have you on Metal Assault for a one-on-one interview. I’ve been seeing you play with The Iron Maidens for the last couple of years and now it’s kind of unreal to see you on stage with Alice Cooper. How’s everything been going for you?

Oh, thank you so much! To be honest, it’s kind of unreal for me too (laughs). It’s been an incredible journey up to this point with the Alice Cooper band. It’s definitely a dream come true.

The announcement of your joining the band came less than a month before the tour began. How much practice time did you actually get with the band?

That’s insane. So, in these rehearsals is it pretty much exactly like how we see it on stage with all the theatrics and everything?

Yeah absolutely. Rehearsals are done with the full production. We get really interactive with each other and work out how we’re going to position ourselves for every song, where we would go and that kind of stuff. There’s the guillotine, the Frankenstein monster, and all the different stage props that are used, and you start getting used to interacting with them while playing on stage.

Your fellow guitarists in the Alice Cooper band are Ryan Roxie and Tommy Henriksen, whom I’m sure you’ve never played with before. How long did it take for you to get used to jamming with them? When I see the Alice Cooper show, obviously all three guitarists are doing something individually and also combining to play some parts as well.

Yeah, it’s really cool. Both Ryan and Tommy have such great knowledge of the music. Ryan of course has been Alice since 1996, and Tommy has the mind of a musical director. He hears all the single little nuances and subtleties going on in the songs. Between the three of us, it’s very rare that you will hear two guitarists playing the same thing at once, and absolutely never will you hear all three guitarists playing the same thing at once. All three of us are doing something slightly different. It makes for a really cool dynamic and it’s interesting to listen to. 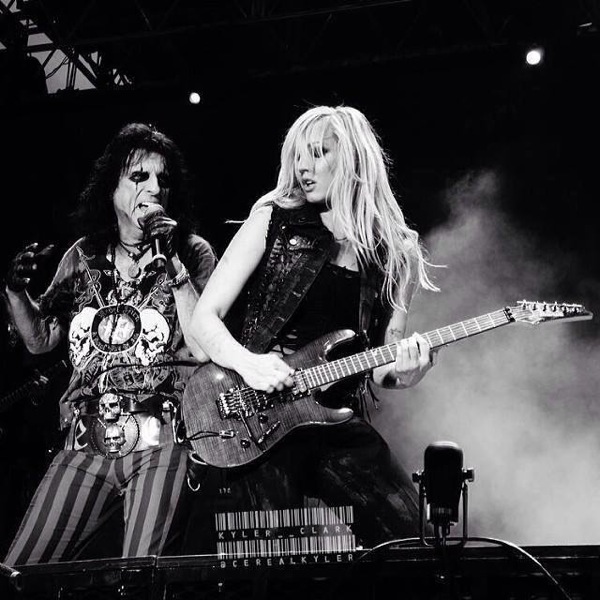 Right, and it’s interesting because most of Alice Cooper’s songs were written as two-guitar songs. So, in your opinion how does it affect these songs to play them on three guitars?

You know, I think it adds a lot. ‘Dynamics’ is the key word. It adds a dimension to the music. A lot of artists and bands today use a lot of backing tracks on stage, backing vocals, harmonies and that kind of stuff. But the Alice Cooper band doesn’t have anything like that. There are no backing tracks, no tapes, except for the thunder, lightning and rain because we can’t play that (laughs). But besides that, everything you hear is live and the third guitar adds that depth which a lot of bands are missing.

The set list on this tour covers a lot of ground with the Alice Cooper catalog. What’s been your favorite songs so far? You’ve been playing the same set every night of the tour, I believe.

We’ve been doing the same set with Motley, yes. Our set opening for them is 50 minutes and our headline set is an hour and 50 minutes, so it’s more than twice as long. We started out with three headline shows. It’s such an honor for a young guitar player like me to stand up there on stage next to a legend like Alice Cooper and play these songs like ‘Ballad Of Dwight Fry’ and ‘Welcome To My Nightmare’, and to be a part of the experiences people have when they hear these iconic songs is just amazing. And then of course you have the fun ones like ‘Feed My Frankenstein’ which I really enjoy playing. Steve Vai is my favorite guitar player and I get to play a Steve Vai solo in that song.

Very cool. And before this you’ve played in LA bands with a more modern or shred metal style. So from that to go to this extremely vintage classic rock thing, how was that transition for you?

It’s been a great transition, actually. I’ve played a lot of different styles in my lifetime already. I was in Jermaine Johnson’s band playing funk and rock, and I also worked with this band called Critical Hit, which was very orchestrated, classical and symphonic. So this is just another style to conquer and master, and it’s a challenge but I’ve had a really great time doing it. As a shred guitar player you might think that you’re a rock guitar player, but you’re not. It’s two very different things and you actually have to become a rock guitar player, and that’s what I’ve been trying to do with this gig.

And finally, would you want to be in one band for the long haul or are you one of those guitar players that’s open to doing sessions and tours with a lot of people at the time? What’s your preference?

You know, I’ve always been that session kind of player, I’ve always had a lot of different projects going on. But right now where we are with this band, it feels so good, I’m so happy to be here and I definitely hope to stay on for a long time.