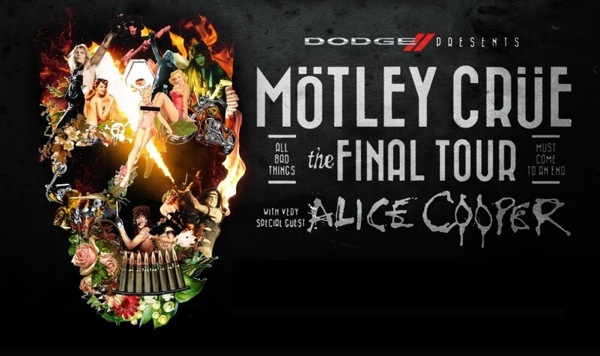 July 21st 2014, Hollywood Bowl, Hollywood CA: Los Angeles glam metal veterans Motley Crue announced their retirement earlier this year, and embarked on an extensive farewell North American tour with support act Alice Cooper this month. ‘The Final Tour’ arrived in Los Angeles for a gig at a nearly sold-out Hollywood Bowl last night, as 18000 fans awaited the Crue’s final hometown show. ‘All bad things must come to an end’ is the catchphrase being associated with this tour, and ironically enough, the Crue performance we were about to witness would befit the statement to perfection.

But before that, shock rock legend Alice Cooper took the stage at 7:40 for a 50-minute set that once again proved the sheer timelessness and indelible quality of his music and live presentation, as he brought forth a solid selection of tunes from his glorious catalog, with the help of his five excellent band mates. It was still bright out during the entirety of this set, and it was extremely strange to see an act like Alice Cooper in that setting. Even though Alice left no stone unturned and brought all his theatrics to the show, specially towards the latter half of the set through ‘Welcome To My Nightmare’, ‘Feed My Frankenstein’ and ‘Ballad Of Dwight Fry’, the daylight certainly took away from the impact of his theatricality to a great extent, but on the other hand it laid more focus on the actual music itself, which all six musicians on stage did a fantastic job with, not least of all the 66-year old Alice himself, still delivering the vocals with great power to fill out the entire venue and make a memorable impression on each and every attendee, right up to the very last row of the Bowl.

New guitarist Nita Strauss also got a fair share of the center stage and showed she belonged. After having seen her perform with The Iron Maidens over the last few years, it was absolutely surreal to witness her taking it to the next level and gracing the big stage with aplomb. In this set, the guitar work by her and partners in crime Ryan Roxie and Tommy Henrikson was delightful in particular on ‘Billion Dollar Babies’ and ‘Dirty Diamonds’, but along with bassist Chuck Garric and drummer Glen Sobel, they vindicated the fact that all musicians in Alice’s group have always been competent and capable of pulling their weight individually. Overall, while it can be safely said that the Alice Cooper live show belongs in theaters and indoor arenas, he and his band treated this audience with an incredible rock show, in the process putting the headliner to complete shame. 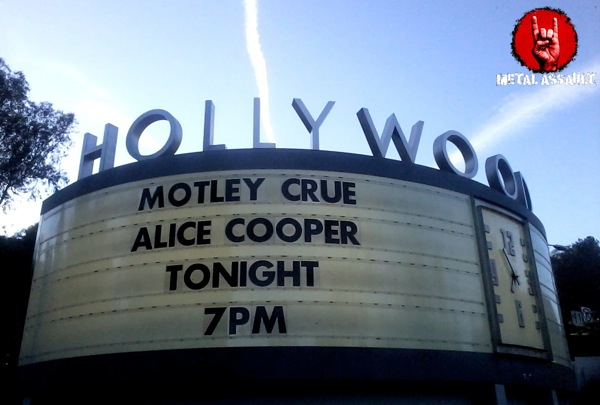 The lights went out at 9:05 and it was Motley Crue‘s turn to take this stage. I first saw them as a support act on the main stage at Ozzfest 2010 where I honestly thought they were terrible, and at the Jimmy Kimmel Live mini-concert last January where the shortness of the set made it a lot more enjoyable. On this occasion it was going to be a full-on Motley Crue headline set, and I was already bracing myself, prepared for the worst but hopeful of the best. They began with the mediocre 2008 tune ‘Saints Of Los Angeles’ but following that they turned it up a notch with older selections ‘Wild Side’ and ‘Primal Scream’. They then went on to play 17 more songs from their much-revered and popular musical catalog for a set that altogether spanned an hour and 50 minutes. Singer Vince Neil looked out of shape and sounded out of breath those last two times I saw the Crue, so he was always expected to be the weak link here and he didn’t fail to live up to that reputation, but aside from his blatantly obvious shortcomings, there were quite a few negatives associated with this Crue set. Where do I begin?

After the first couple of songs, the vocal performance began deteriorating rapidly and alarmingly. Vince Neil wasn’t just bad at singing his parts, he wasn’t even singing many of the chorus and verse lines, choosing to point the microphone to the audience multiple times instead, as a cheap cop-out more than anything else. It was discernibly clear that he was using backing tracks, but even that didn’t do much to mask his true colors as a modern-day vocalist. Besides, his ‘high-pitched’ screams were an absolute joke. At the age of 53, he’s 13 years younger than the singer who took this stage just before him, and younger than a lot of singers who’re still out there performing all over the world and doing an infinitely better job at it. Neil is an embarrassment to himself, his band and their fans, and sadly a far cry from the Motley Crue singer that recorded classic albums such as ‘Too Fast For Love’, ‘Shout At The Devil’, ‘Theatre Of Pain’ and ‘Dr. Feelgood’.

Perhaps it was easy for a true Crue fan to put aside the vocal flaws and focus on the positives instead, but there really weren’t many of those. Production-wise, the stage setup was surprisingly simplistic and the show lacked oomph, certainly not justifying the ticket price which is even higher than what KISS are charging for shows on their current tour, a show much more worth the ticket buyer’s money. The famous Tommy Lee roller coaster drum solo was also nowhere to be found. Not that humanity was severely affected in any manner by being deprived of a Tommy Lee drum solo, but the visual aspect of it would have been worth seeing, and with this being the ‘final’ LA show, by all means it should have been included.

The only redeemable qualities of the set were the performances of Nikki Sixx on bass and Mick Mars on guitar, who in all honesty put forth some great work on his instrument, although ruining it slightly by playing the most boring guitar solo ever witnessed on the face of the earth. The biggest disappointment of this Crue show was the manner in which the greatest hits like ‘Shout At The Devil’, ‘Live Wire’ and ‘Kickstart My Heart’ were performed. They were played at the wrong tempo, with Vince Neil completely butchering the vocals. I’m as big a fan of Crue’s classic albums as anyone else and was genuinely excited to hear these three tunes in particular, but was shocked by the mediocrity of their renditions. Most of the other tunes in the set also failed to make an impact, and for me the most enjoyable items of the set turned out to be ‘Primal Scream’ and ‘Too Young To Fall In Love’ along with the two covers ‘Smokin’ In The Boys Room’ and ‘Anarchy In The UK’.

They ended with an encore of ‘Home Sweet Home’ while performing atop an elevated mini-stage positioned amidst the crowd and said their final goodbye to their hometown fans. After seeing the kind of fanfare they still enjoy, filling out an 18000-seater venue, I couldn’t help but think of other glam metal bands/musicians that wrote better music, should have been a lot more popular, do a much better job performing their own tunes and would charge a lot lesser for tickets, the likes of W.A.S.P., Dokken, Whitesnake and Michael Monroe coming to mind straightaway.

Overall, Motley Crue’s ‘final’ performance was a failure of epic proportions and I’m extremely grateful that I’ll never have to see them again. If you’re contemplating attending any of the shows on this tour, if you’re doing it for Alice Cooper you’d be better off waiting for him to return with his own show in an indoor venue, and if you’re doing it for the Crue, you’re best advised to invest the $150 you’ve put aside for ticket money on a record player and an original pressing of ‘Shout At The Devil’ instead.