Sacramento hard rock/heavy metal outfit Roswell has made a name for themselves quite rapidly over a mere three-year existence thus far, with their wide-ranged musical style and dynamic live shows. They will be part of Metal Assault’s first event in Sacramento, at the Blue Lamp this Friday August 4th, and earlier this week we caught up with singer Greg Halldorson for a chat about all things Roswell! Check it out below, and if you’re anywhere near Sacramento, you know where to be this Friday night!

Greg, it’s good to have you on Metal Assault for an interview. We’re really excited to have you guys on our first Sacramento show coming up next Friday at the Blue Lamp. First of all, how’s the preparation been going?

Good, man! We just played a big festival in Marysville, and other than we’ve got a couple of new songs we’ve been working on, and we’ll actually be debuting them at your show!

Awesome! So, what’s been going on in the world of Roswell, this year or recently?

Well, we’ve actually been focusing heavily on writing new material. We’ve been in this scene for about three years now. The first year was spent on getting the material that we have now all ready, and we became a tour de force. We started playing shows like crazy, built a very loyal following, went in and recorded our first album, and we had a very successful CD release. Then unfortunately we parted ways with our bass player who was actually the founding member of the band. As of recently, Marcel, who is the newest member of the band. He took over bass duties and he has brought a really cool, different influence to the band. So, we’ve been working with him on developing some different sounds for the band.

That’s very cool. You said that you have been playing shows quite a lot in the last three years since you started out, and you’ve been sharing the stage with some bigger acts too. That must have helped you build a following.

Absolutely. We’ve been very fortunate. We’ve played with bands that we went and saw when we were younger (laughs). We opened up for Dokken a few years ago to a sold-out crowd at Ace Of Spades out here in Sacramento. That venue holds anywhere between 1000 to 1500 people. We had an amazing response from that, and then again a year later we ended up opening for Y&T on New Years Eve, at the same venue, sold out again! That was an even bigger response. So, gigs like that have really helped the band forward. And we’re very happy that people liked our sound, because we don’t sound like Dokken or Y&T. 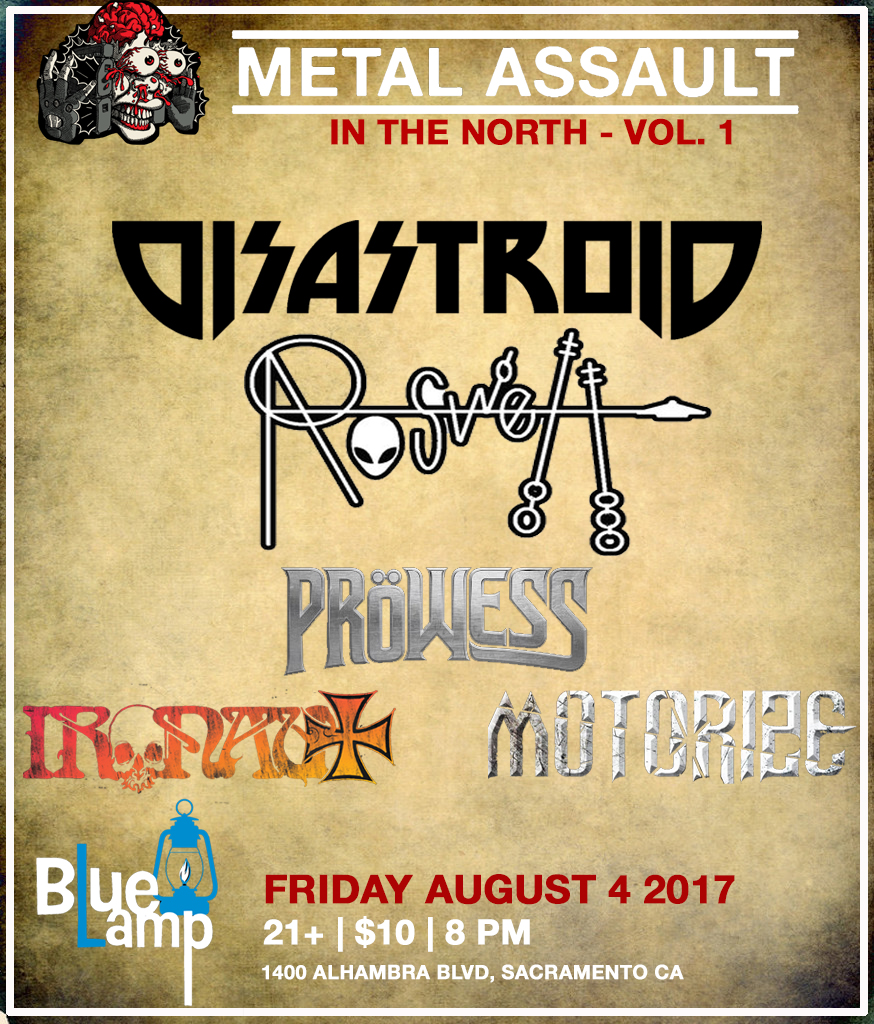 That’s what I was going to say. So, do you think you’ve been able to put on the kind of show and write the kind of music that fits well with pretty much any lineup, to where if people saw you live they would walk away impressed?

I’d like to think so! The lead guitar player Scott Thomas and I … he brings in the music and I work on the arrangement and lyrics along with Scott. We both bring heavy influences from bands like Sevendust, Soundgarden, Alice In Chains and Buckcherry, but I think what we’ve come up with kind of fits along with that style as well as many different genres of rock and metal. I think that we’ve got that heavy Black Sabbath kind of groove vibe thing going on, but we can be poppy, more like a Buckcherry or something like that.

So you’ve got a pretty accessible sound going for yourselves, in that sense.

I’d like to think (laughs). I’d leave it up to everybody else to decide what they think. But we do get a really good response from everybody who listens to our music.

So far the shows you’ve done, specially with the bigger bands, is that something you deliberately select what bands would be better for you, or do you kind of take the opportunity and treat it as a challenge to see how it goes?

For the most part, it’s kind of taking the opportunity as it comes about. The other part is we’re all real busy guys and stuff like that, so we can’t take everything. Sometimes it’s hard to cherry-pick what gigs to do and to find stuff that would fit in our calendars. But the gigs that we have gotten ended up turning out really, really well for us. 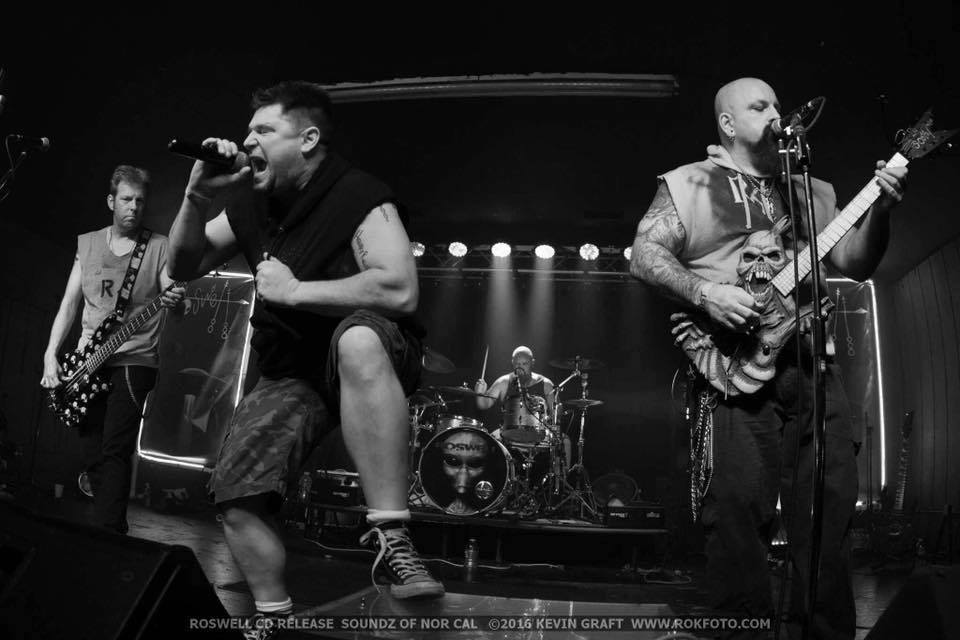 In terms of the Sacramento scene, people say different things about it, but what is your own opinion, now that you’ve been in it for three years?

I think there’s just an incredible amount of talent out here in Sacramento, some really amazing bands that have been busting their tails for quite some time. I think it’s kind of untapped market.

Right, that’s what I’m trying to tap into with my shows and hopefully that’ll lead to something good. So, in terms of your own shows, have they only been in Sacramento so far, or have you guys been able to venture out, at least within the state?

We’ve gone as far east as Nevada. But yeah, mostly in Sacramento, obviously, because that’s where we’re from, but we get out into to the Bay Area and we’ve gotten out to the Central Valley, as far south as Fresno. We’re hoping to make it even further south into LA and San Diego. We think we’ll be well received down there.

Definitely. Aside from this Blue Lamp show and writing the album, what else are you planning for the band?

Well, like I said we’re writing new material, we’ve got a few songs that are recorded, that we’re just kind of finishing up. We hope to add to that. We’d like to write five more songs and get another album out.

Going back to when you started out, was there a plan in mind in terms of what you were going to sound like, or was it just one of those things where you got together with some friends, started jamming to see what came out?

We definitely talked about what our influences were and what we wanted to present. The one thing that really came out was that we wanted to be a very heavy groove oriented band. We were taking random crazy stuff and putting it together to see what we could do. We’ve got stuff that’s influenced by Jimmie’s Chicken Shack and Infectious Grooves and a lot of my stuff is influenced by Soundgarden and Chris Cornell. Black Sabbath is a huge influence of mine. Alice In Chains, Sevendust and Pantera are huge influences of Scott’s. So, we kind of just take all this stuff, throw it together and see what works (laughs).

And talking of your live show, next Friday there might be people in the crowd who don’t know your band. What can people expect from the live show in terms of the visual aspect, and what do you try to do differently to get attention?

Well, generally what happens is, people wonder if they’re about to see a jazz band, because I usually come up in a full suit (laughs). The name of the Roswell, so I kind of dig the whole Men In Black thing and I dress that part as the frontman. I’m also a sound and lighting guy, and I own a sound and lighting company. So, whenever I can, I try to move as much of the lighting stuff into our show as I can. I have a couple of smoke geysers and things like that, just little things, but it’s stuff that hardly any bands do anymore. So, it’s always fun whenever we’re playing and I set those geysers off to shoot up massive smoke columns, that are lighted up. And people are like, oh my God, did they just set off fireworks on the stage? So, for somebody who haven’t seen it before, it’s usually surprising and impressive.

Right, that sounds cool. Does it get hard to perform in the suit in the summer months?

(Laughs) Every time when I come off stage, people ask me, what the hell were you thinking and how the hell were you able to do that. Yeah, it’s tough. I’ll tell you, the festival we just played the other day, it was outdoors from 3 to 5 o’ clock, and it was 105 degrees out. I didn’t go on in the suit. None of us did. I was also running sound and lights that day. So, we were just wearing shorts and t-shirts, and we played in front of people that had seen us 15 times. So it wasn’t like we needed to be like, hey everybody, we’re Roswell and this is what we do. But at your show, we’re definitely going to come out in full gear and we’ll put on the full Roswell show. And you know, I figure if our troops can wear the gear they do out there in the desert, then I can perform in a suit for 30 minutes.

Exactly, man. And the name Roswell, I know the logo has that alien face thing. Does the band name have anything to do with Roswell, New Mexico?

It’s funny, the original bass player, he was the one who put the band together and he said he always wanted to have a band named Roswell. I thought, OK, I’m cool with that. I love ancient aliens and all that sci-fi stuff. So we worked out a logo to have the crop circle and alien face in it, and the whole Men In Black thing came into play. So yeah, it has a lot to do with Roswell, New Mexico, and I think it’ll be cool some day to perform out there.