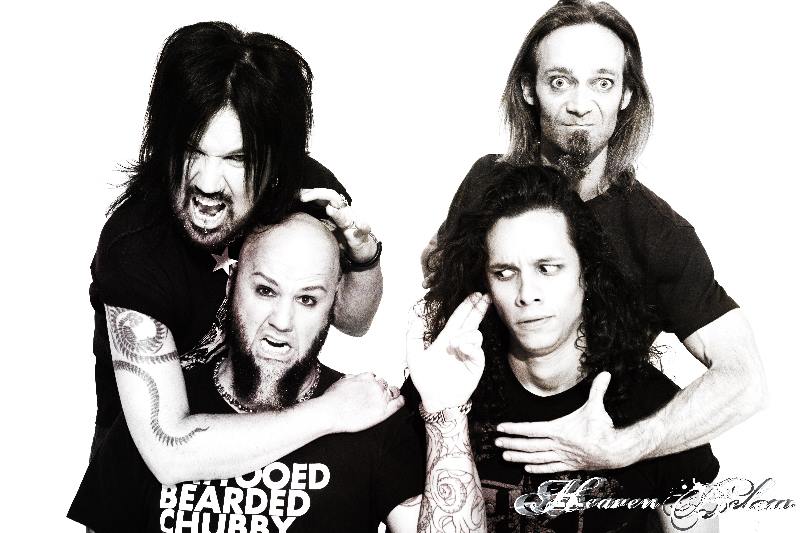 Los Angeles based heavy metal band Heaven Below has been circling local clubs as well as and the national touring circuit since 2008. In 2014, guitarist/vocalist Patrick Kennison got the call-up to join Lita Ford’s band, but instead of falling by the wayside, Heaven Below carried on, got signed to the EMP label group and released their third full-length album, a concept-based creation called ‘Good Morning Apocalypse’, on October 14th 2016. Everything about Heaven Below’s musical style is quintessentially heavy metal, and they excel in every aspect. On November 6th, they played a splendid record release show at the Viper Room, and before they hit the stage all guns blazing, Patrick Kennison, along with bassist John Younger and guitarist Lucas Kanopa spoke to Metal Assault to discuss all things Heaven Below. Enjoy the conversation below:

The last time I interviewed you guys, it was six years ago when you had just released the self-titled EP. Here we are, full circle, and you’ve put out a new album recently. What’s been going on with the band during this time?

Patrick: We stayed busy! Right after that EP in 2010, we toured for it, West Coast, East Coast and some of Canada. We got the song ‘When Daylight Dies’ on national radio which is downright impossible without a major label, but we did. And then, come 2012 we decided that we were going to do a concept album like ‘Operation: Mindcrime’ and we said it as a joke (laughs), but we started really writing songs for it, and four years later, we got four legendary guest singers and it actually happened. It was something we were making fun of, but it came out. Our friends stepped up and helped us, and ‘Good Morning Apocalypse’ something we are proud of. We are excited to get a label involved and chase the dream again.

The album came out on October 14th. You’re obviously going to be performing a lot of it tonight?

Patrick: Absolutely, I think we’re doing four new songs. A lot of our close friends and fans tell us that we need to play the whole album. I don’t know about that because we also have a lot of good older material, like the EP you interviewed us on. We have three full-lengths and an EP, and we got Lucas Kanopa, the new guy, just in time for the concept album.

How did you come to join this band, Lucas?

Lucas: We had a friend in common, and I found out that they were looking for a guitarist…

Patrick: And I told that friend, if this guitarist is a friend of yours, he’s probably awful (laughs).

Lucas: Right, so Patrick asked me to send him a video of me playing a Heaven Below song, and the same night I sent the video. And he was like, OK, let’s rehearse (laughs).

Patrick: Yeah, I think I told the guys that he played that part better than me, so let’s go ahead and try him. And of course, by the third song in the rehearsal, we all looked at each other and were like, “Yeah, we better get this guy.” 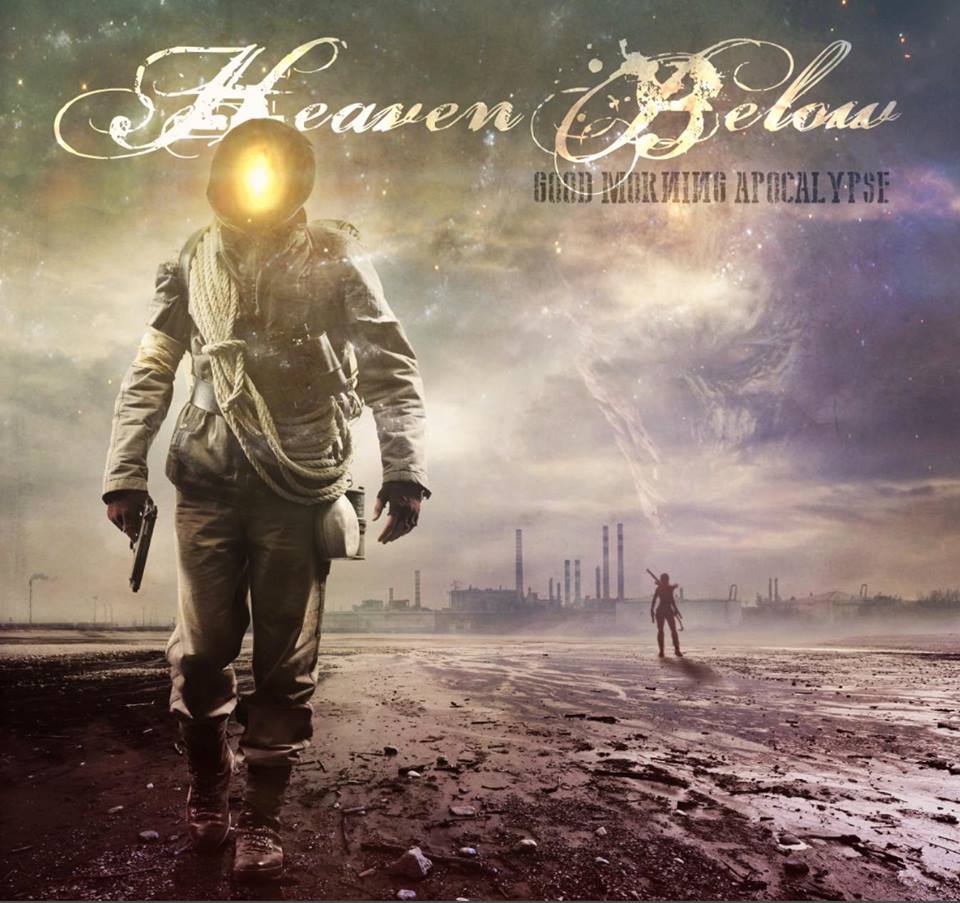 Patrick, you’ve been busy touring with Lita Ford and you have to work around that. Has it been difficult to keep Heaven Below going?

When Patrick got that gig, what did you think was going to happen to this band, John?

John: Truthfully, I thought, well, there goes that band! (laughs) But it was really unfounded because it was the exact opposite of what happened. He’d been working on material for this record for a long time and we had two other releases ‘Falling From Zero’ and ‘Deadlight Sessions’ in the meantime. Initially I was like, I guess this is done, but as soon as he got on the road we were on the phone back and forth everyday, getting the material together, and it actually kind of kicked it up. And then we got signed by EMP, which helped, for sure. Now we’re just looking forward to getting out there and playing these songs!

So, you think you’ve got more attention for this band after getting that gig.

Patrick: Absolutely. This sounds like something a businessman would say, but the marketplace is so saturated, sometimes it takes Udo Dirkschneider, Lita Ford and Jason McMaster for people to go, “Wait, I better listen to this album.” And I’m OK with that, you know. Whatever it takes to get there. It’s like a girl, she wears a top that you can see through and you go, “Wait, yeah, she is hot.” That’s fine, whatever gets people to find out that they like what we’re doing (laughs). 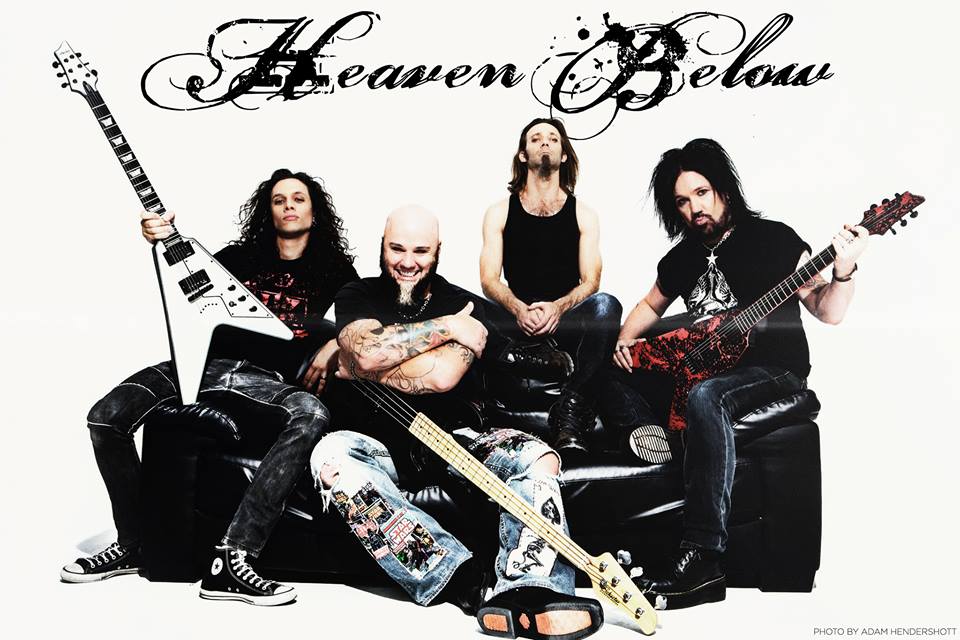 Besides Lita Ford and Udo, there were some other guest musicians as well on this album that I was noticing. Can you talk about how that worked out and how you got these people involved?

Patrick: Yeah, it all started first with Udo Dirkschneider, because our co-producer of the album, Jesse Billson, who was in Heaven Below, played with Udo on the Metal Allegiance tour. And when he was out there, I told him that one of the songs I had for the album was perfect for Udo, and asked whether he’d play it for him. He said he’d do it because we’re friends, but I didn’t expect anything would happen. Jesse hit me back and said Udo likes the song and would sing on him if I wanted him to. Oh my God, I could not believe it. So, then I was like, who else can I get? I called Jason McMaster because I’ve known him forever and that made sense, and then of course, I joined Lita Ford’s band. She loves Udo and we use Accept on the Lita tours to walk out onto the stage. I told her he was singing one of our songs and she agreed to do one as well. Then we needed one more female vocalist. A friend of ours, Bones Elias, who has played with Sixx:A.M., Julien K and he was also in Heaven Below, he said he was playing with this band called Kobra And The Lotus, and the girl singer is amazing, and that she would probably sound good on that song I wanted the female vocalist for. He called her, and inside of one hour, her and I were on the phone and she ended up being on the album. So, it’s all friends and networking, just like any other part of life. You make friends with people, and the next thing you know, they’re on your album! The song Kobra sang is ‘Devilina and the Damage Done’ and I’ve gotta tell you, it’s one of my favorites. She kicked the whole thing up. She’s going to be in the video too. We already shot her part up in Canada.

Looking forward to that! So, Heaven Below has been around for a while and you’ve been playing shows locally in places like the Viper Room. Do you think anything has changed in the past few years, for better or worse, around here?

John: Hollywod kind of stays the same. I feel like rock/metal is less popular in America, but I was reading an article recently and it was interesting to read that with Spotify and online streaming services, metal/rock is the most streamed genre of music. May be it’s because people don’t buy music as much, but that’s fine because I guess now this streamed music is also like the music video, a promotional tool. It’s totally cool. If you’re not buying the music, come to the show, buy a shirt, or don’t! Rock is alive in Hollywood, still, and in the rest of the country. It’s waning, but it’ll come back. It always does. It’s never going to die, for sure. The next Guns N’ Roses or Nirvana is going to come along and save rock. Hopefully, Heaven Below!

Patrick: That sounds like a big task, to tell somebody you can save rock. Once we’ve been drinking, we’re going to say, “Yeah, we’re gonna save rock!” Then when we’re sober, we’d be like, “Oh man, that’s too scary!” (laughs)