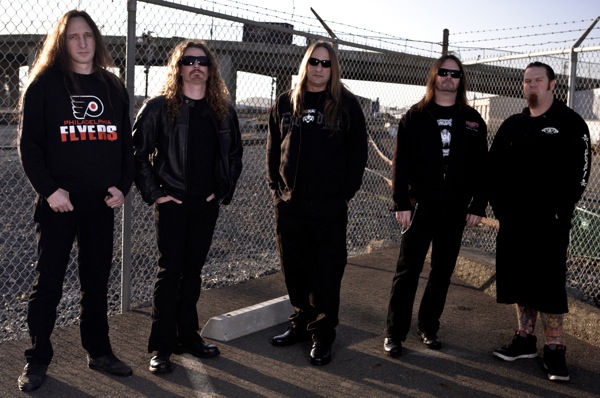 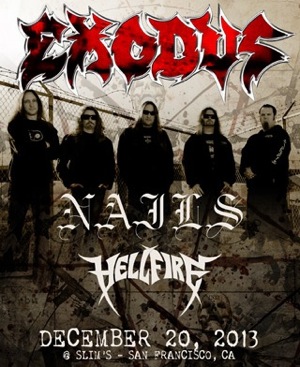 Around the time when Exodus released their th studio album ‘Atrocity Exhibit B: The Human Condition’ in 2010, they were a highly active touring band, headlining tours in America, Europe and elsewhere, doing support tours, and playing festival gigs. But soon after, guitarist and principal songwriter Gary Holt was asked to fill in for Slayer guitarist Jeff Hanneman for some live shows. With Hanneman’s constant health issues and subsequent death, Holt’s involvement in Slayer continued and as a result Exodus slowed down. But now, with a hometown headline show at Slim’s in San Francisco coming up tomorrow Friday December 20th, Gary Holt and Exodus are ready to pick up where they left off, and will soon be recording a new album as well. A couple of days ago, I spoke to Gary Holt to discuss all things Exodus and Slayer. Read the first part of the interview below.

Gary, good to have you on Metal Assault. You’re playing a show with Exodus at Slim’s this coming Friday. It’s been a while since you’ve played an Exodus show.

Well yeah, I’ve played Exodus shows here and there but just not a headlining show in San Francisco for like three years. It should be super fun. I’m real excited about it!

Slim’s has a real thrash history as well. What’s your experience been like at that place?

Right, so how’s the preparation going for you? I guess you would have had to get together with the rest of the Exodus camp and do some rehearsals for this show.

Yeah, we met yesterday. Tom and I showed up earlier than everybody else and we were working on some new songs for the next record, and also rehearsing for the show, so we kind of killed two birds with one stone.

Recently I was at the Hollywood Palladium show where you played with Slayer, and you guys played a cover of ‘Strike Of The Beast’. That was a pleasant surprise and I honestly never thought Slayer would be covering an Exodus song. What was it like for you to be playing that with those guys?

It was fun! I mean, Slayer does a good job with it but Exodus does it better because it’s our song (laughs). I don’t think we (Exodus) would do a Slayer song better than Slayer. But it was an honor and a compliment that they wanted to do it, because I told them, ‘Look, you guys don’t have to do this because of me.’ But Tom and Kerry certainly wanted to do it. We did it at the Mayhem Festival in Mountain View last year, and we did it every night except for the first night in Hollywood on this last tour. It was a lot of fun.

So it was their idea then, and not yours.

Yeah yeah, it was not mine. I gave theme every opportunity to not do it, but they were like, ‘Fuck that, we’ll do it!’

What are some of your favorite shows that you’ve played with them?

Mayhem was super fun. But the most fun shows were probably the Big Four shows, because it helped me and Kirk reconnect and become really close again like we were in the old days. Just playing with those guys, the Anthrax dudes and Megadeth, those were just some epically gigantic shows. So it was very, very cool. If they’d only do a Big Four show in San Francisco, I’ll be happy. They need to! It has to happen in San Francisc. I mean, come on! (laughs)

I agree! So, you did this Slayer tour on big stages across North America and from that you’re coming to this club show at Slim’s, which must be an exciting prospect for you because that’s the setting in which Exodus belongs and it’s more intense that way, isn’t it? 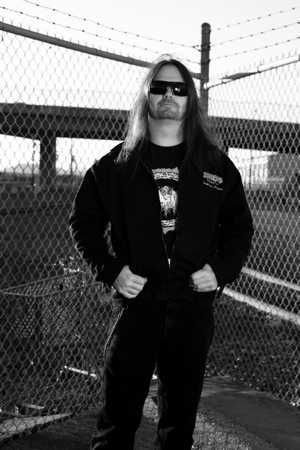 Right, in terms of your involvement in Slayer, you’ve said in the past that you were not trying to imitate Jeff Hanneman. Before his death, you were the fill-in guitarist, but then he passed away and you continued playing in the band. Did you feel scared at all that people would react negatively to seeing you on stage as Jeff’s replacement?

No, I’ve been fortunate and very lucky. In three years now I’ve had like may be two hecklers (laughs). I can’t understand why someone would pay money just to come and flip someone off the whole show, you know. But yeah, I had just two hecklers in countless shows and I had one who had a good spirit about it. We were having fun with it. He wasn’t out there saying, ‘Fuck You!’. We were just laughing and flipping each other off back and forth, and at the end of the show he complimented me. So, it is what it is, and I think most people understand my role in the history of this genre. They understand that I’m not some new metal dude who’s stuck in this band playing these parts. They understand that I was there at the very beginning, if not the beginning of this whole genre, but that’s up to debate. Exodus in its earliest incarnation goes back to 1979.

Where exactly did you have those hecklers? Do you remember what show they were at?

I do remember that one was in Germany. It was one of my early shows with Slayer. The guy had this really bad skullet. He was super-bald but clinging to the last of the hair he had on the back of his head. And the funny thing was, my guitar tech and Kerry’s guitar tech would beat anybody to death and all I had to do was ask them. I thought about it for a second, and they would have just dragged him out and pummeled him. But I decided to leave him alone. But then our production manager got down from the stage on his radio and the dude saw that he was probably going to get thrown out, so he vanished (laughs). But I spared him. I could have had him going home bloody that night if I wanted to, if I cared that much.

Coming back to Exodus, you were talking about working on the next album. When can we expect that? How far are you with that process?

I’m starting to go over the riffs I’ve been writing and stuff like that, and we’re hitting the studio in February and going from there we should have it out in late summer.

That’s good to hear, because it’s been a while. Your previous album ‘Exhibit B’ came out in 2010 I believe. So finally, with Exodus do you have any touring plans?

The only thing we’ve got booked other than this show Friday night is, we’re headlining Thrash Domination in Tokyo in March. Other than that, we’re just trying to get the album done.