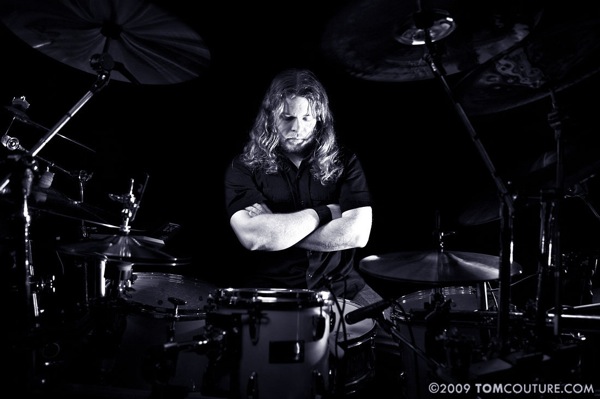 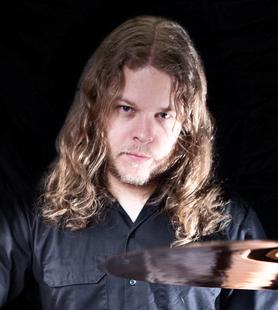 In modern extreme metal circles, John Longstreth is one of the better known drummers, through his involvement in various well-renowned bands like Origin, Gorguts, Dying Fetus, The Red Chord, Exhumed and others. Currently he plays in both Origin and Gorguts, and is also pursuing a side-project called Crator. Aside from these bands and projects, he is also looking to put out his first instructional DVD via Reversed Records, for which he is running an IndieGoGo campaign, which has less than a month left till its deadline. A few weeks ago, I spoke to John about being a part of the amazing new Gorguts album ‘Colored Sands’, the instructional DVD, IndieGoGo campaign, Crator, influences, jazz and future plans. Read the conversation below.

John, we’ll mainly talk about your drumming and the instructional DVD in this interview, but before we do that I’d just like to ask you, what has it been like for you to be involved in the new Gorguts album? The band has put out a new album after a long time, it’s your first album with them and it has received a great response from listeners.

Yeah, it’s amazing! I started talking to Luc sometime right after Gorguts had put out ‘From Wisdom To Hate’. We fell out of contact for while, but may be about five years ago, we started talking again and originally we just talked about doing an instrumental project. But after a while he decided to do a new Gorguts album. I wanted to do something different and he gave me quite an opportunity to do just that. So it’s been great.

Playing live, how challenging is it as compared to the other stuff that you do?

It’s a lot more challenging mentally, because Luc, Kevin and Colin all write a lot differently There are things in odd meters which I’m not a 100 per cent used to using, and it’s just a whole different approach and sense of detail. So it is challenging, but more mentally.

So, talking of your instructional DVD which is supposed to come out soon, how did you decide to do that and how long did it take for you to put it together?

Well, this was something that my manager and I basically discussed for a few months and decided that we should do it. It didn’t take long at all because really all I am doing is just explaining what techniques I use and how I developed certain techniques. It’s not a right-and-wrong thing which says this is what you need to do in order to develop this technique. It’s more about how I got to being able to do specific techniques, and may be it will work for other people as well. So, we were able to get together and recorded the whole thing in about a day. It ended up being a 15-hour recording session, but it’s recorded and we’re looking to get the funds so we can actually put it together and put it out. 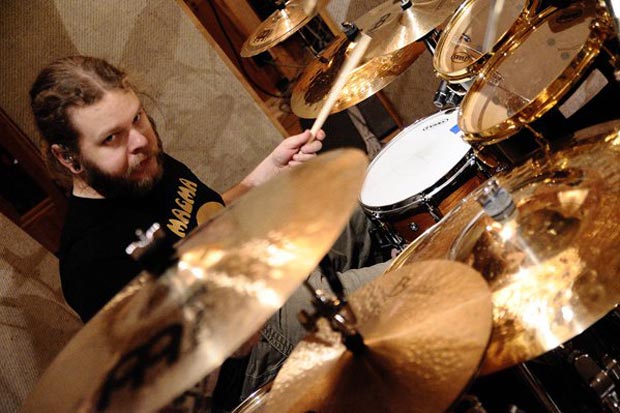 Yeah that’s what I was going to ask you. You’re on this IndieGoGo campaign which kicked off in late October and you’re trying to raise funds for this DVD release. What are you offering in return for people’s donations?

Well, you can simply order a poster if you’re looking to just give away $10 or something, but we’re basically looking at it as a pre-order campaign for the DVD. We’ve got various perks that include free drum lessons, well not really free but if you pay a certain amount you get a drum lesson. There are Skype lessons as well, and I’ve got a little bit of gear that was used for the DVD that we’re offering up as well. And the perks go all the way up to traveling to somebody’s place and teaching a lesson or whatnot.

That’s cool. A lot of bands and musicians are doing campaigns to raise funds. Some of them don’t succeed. In your opinion, what do you think it takes to succeed with these campaigns? Is it just the right marketing?

Well yeah, that’s obviously very important but it’s tough. It’s more interesting to see how people treat artists than actually utilize this, because this kind of really is the most grassroots manner of staying underground and independent. You are cutting out a lot of middlemen. You are basically allowing yourself to sell your product directly to your fans. Considering that I’m a death metal drummer, I basically do all of our touring out of a van, we’ve done a lot of ground work and spent a lot of time out. When we go to the shows, we don’t hang out in the hotel room all day long and then show up to the venue. We’re usually at the venue, hanging out with people. So I think a lot of it has to do with having that ground-level relationship with your fans and I think they appreciate that a lot. When you’re actually able to spend a lot of time talking to your fans, they’re going to be a little more receptive to a fundraising campaign like this.

I agree with that. As long as you connect directly with the fans, when you ask them for something like this there’s a better chance they would respond to it.

Correct, I think so.

There’s another project you started recently, called Crator. Tell me about that.

Crator is just a project I started with my friend Jeff about six years ago. I live in New York. Origin is kind of spread out all over. Jeff wanted to develop his chops to be able to play faster, and I wanted to have somebody to practice with. We never really set out to write songs. We wrote exercises for the most part, but after a while we strung these exercises together and they started to sound like songs. So basically, it’s just something that kind of slowly matured into what it is now, and we have about an album’s worth of material that we’re getting ready to record, hopefully. It’s definitely in a similar vein of Origin but it’s probably more thrashy and melodic than Origin. Actually one of the things this DVD is going to do is, to see the official launch of Crator. Some of the songs I play on the DVD are going to be released as an EP, so I hope people will enjoy that.

You’ve been a drummer for such a long time and you’ve achieved things in your own career. But are there still any drummers that you look up to as your idols or influences or people who you generally learn from?

Oh, of course. As far as extreme metal is concerned, my favorite drummer, I have to say, and I don’t even know his name because I’m not allowed to know his name, but whoever the guy is that plays drums for Deathspell Omega is currently my favorite guy as far as anybody that plays blast beats or anything like that. As far as influences are concerned, I’m very lucky to have one of my main influences Gene Hoglan as the executive producer for the DVD. I was actually able to sit in there and watch him record some of his new DVD. There’s guys I’ve always listened to, like Gene Hoglan, like Nicko McBrain from Iron Maiden, Paul Bostaph and Dave Lombardo from Slayer, all the old-school guys, all the top death metal guys, Derek Roddy, George Kolias, a lot of these guys. Mike Heller was a big inspiration and for a while I was getting a lot of instruction from him.

I read about your background and you grew up with jazz, if I’m not wrong. Is that still part of your drumming at all in some aspects that you bring into extreme metal?

I’d say yes, because my father was a jazz pianist and there were always jazz musicians in the house from an early stage. The earliest forms of music I was listening to were jazz from my dad’s side and my mom was a big classical music buff. So that’s what I grew up listening to. I only have about four or five jazz records I listen to. I wouldn’t say I’m a jazz buff, but I would say that it did help me form how I viewed music from a very young age. When I was young, I was fortunate enough to take some lessons from a very highly intelligent jazz teacher, and that was good. So, it basically started me off and allowed me to approach things may be a little more open-minded than a lot of the rock guys.

That’s interesting, man. So finally, what plans do you have now aside from this DVD release?

Well, I just recently got back from Mexico. There’s a guy named Cesar Valencia who runs a music school in Cabo, so I basically went down there and did my first drum clinics ever, with Dave McGraw from Cattle Decapitation. We did two clinics and a bunch of lessons, so that is something that was a lot of fun and really opened my eyes as far as what I’m capable of as a drummer. Some people just want to see you play drums and talk about it, so that’s a direction I definitely plan on expanding into in the future. As far as near future is concerned, in December I’ll be going out with Origin and Gorguts. I’m going to do a 12-day run with both bands doing double duty and immediately after that in January, Origin goes into the studio to record a new album.

So you’ll be staying pretty busy in the coming months.

Yeah! And the Crator record is directly pivotal off the DVD. The DVD has to come out and hopefully that will develop some interest for the Crator songs before we actually go in to record the album. I want to be able to develop that, not really slowly, but take it step by step and develop it correctly so people know what’s going on when that comes out.

Great to hear. Well, that’s all I have for this interview, man. It was good talking to you. All the best for the campaign and hopefully see you soon here in Los Angeles!

Thanks man, you will see us in LA next spring!