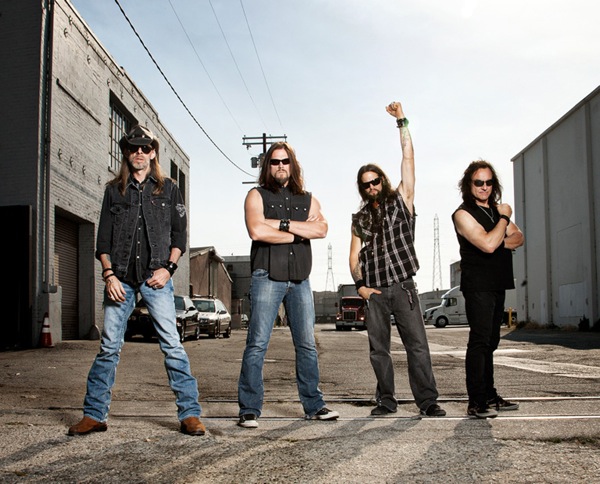 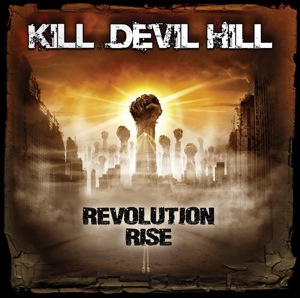 Kill Devil Hill is a heavy metal band that began in 2011 and features in its ranks Rex Brown on bass, Vinny Appice on drums, Mark Zavon on guitars and Dewey Bragg on vocals. They put out their self-titled debut album last year and did sporadic touring, but the year of 2013 has seen them rise to greater heights, with the signing to Century Media Records and the release of an aptly titled second studio album ‘Revolution Rise’. Before they embarked on their ongoing US headline run, I had a chance to speak to Rex Brown about this new album, the development of the band over the past two years, his bass sound, bass playing approach, cover tunes, his KISS tribute gig, and more. Check out the conversation below, along with a tune from the new record.

Rex, it’s good to have you on Metal Assault. The new Kill Devil Hill album ‘Revolution Rise’ came out on October 29th. First of all, in your opinion how much has the band developed over the past couple of years since you guys started out?

Andrew, it’s a pleasure being on here and I appreciate your support. As far as this band is concerned, we basically put out a record last year and did about a hundred shows up till the Alice Cooper run in December. At that point, Mark had some riffs and we had both been writing a bit on the road. We decided to go into the studio in January. Vinny is friends with Jeff Pilson who played in Dokken and Foreigner for a long time. He has a really nice studio with a great drum sound there, and as it turned out it worked perfectly for us. Jeff’s really good at producing vocals. The band pretty much produced itself, but as far as doing the vocals, Jeff did that and Dewey sang his ass off on this one. This record is just bigger, better and bolder. It’s more of who we are now, and it just kind of ties into what we started with the first record. It’s starting to take off and people are starting to listen to us, you know.

I interviewed you and Vinny at the first ever Kill Devil Hill show at the Key Club in Hollywood, and at that time you both said that this is going to be a legit band, not just a side project. I think you’ve achieved that.

You know, what is great about this band is, when we get together we all do our parts. Mark and Dewey are may be not as recognized in the public as Vinny and myself as members of this band but they are just as talented, if not more. We bond together as a group. I initially didn’t know about Dewey but when I heard him I thought it was cool, but when we first got together in the rehearsal room, he just killed it and blew me away. I can’t say enough about how wonderfully he has emerged as a person and as a singer.

Are you satisfied with the bass sound on this album?

Yeah, the bass on this one is really full and it really sticks out. The first record had a lot of bass on it but the sound that I have now is a lot closer and it fits a lot better overall with this band. Everything on this record was more collaborative, and the rhythm section came out really solid. Besides Jeff Pilson we had Jay Ruston, who knew exactly what we had in our heads and how we wanted it to sound. He did a great job.

Did you aim at bringing a different approach to bass playing as compared to what you did with your other bands in the past, Pantera, Down or anything else?

When you play with different bands, everybody has their own style and polish, so to speak. In this band, my bass is a lot more prominent than what I’ve done in the past. Like for example in Pantera records, the guitar was so big on those recordings, and the drums had a lot of reverb on them so it was really hard to get that bass into the mix as far as frequency-wise. In Kill Devil Hill, everything fits in the way it was mixed and I’m really, really proud of it. We worked our butts off on this new record. We’re getting good feedback for it, and that’s great!

You mentioned that you did shows last year, but at the time of publishing this interview you would be on a month-long US tour as well, and I’m sure you’re looking forward to that because it’s your first full US headline tour.

Oh yeah, we’re itching to play these new songs live, man. It’s been way too long since we played, and playing live is what gets us off. We have been rehearsing these past few days, and we’re sure that everything is going to be bigger and better when we step onto these stages. And loud!!

It must be better as well because now you have more songs to choose from.

Yeah, all the songs are fitting together really good. This record is more musical in every aspect, not only with the vocal lines but with everything else too, and it’s fitting with the older songs that we picked from the first record that people like. We gained a lot of new fans and we’re doing so continuously. This band is going to be on the road six weeks on, three weeks off, and we’re going to tour relentlessly until we can’t do it anymore. You just have to do that in this climate of the music business, so that’s the plan.

In the shows that you played when the band was starting, I think you threw in a couple of covers in the set as well because you just didn’t have enough original tracks. But I guess now you’re just going to focus on the original stuff?

Yeah, we played songs like ‘Lady Evil’ or something like that. But there are no covers in the set now. We as a band are proud of our own stuff, we’re not a cover band and we have enough of that now with the two albums we’ve released so far, so we’re not going to be playing any more covers. Once in a while, we might do something. You never know. May be at some point we’ll play an old Deep Purple song. We’ll see!

You mentioned also that you toured with Alice Cooper last year for a few shows. What was that like?

Oh man, that tour was just amazing, and that’s the kind of stuff Kill Devil Hill aims to go for. We played on some of the biggest stages and venues on that tour, dealing with crowds of 15 to 68 year-olds that never heard of us before, and by the end of the night, people were out of their chairs. That’s basically what it was. It was towards the end of the touring cycle and the momentum from that tour definitely inspired us to go back in the studio and do something like that, to have that spontaneity, and it was a great feeling going into the studio, writing what we did. It’s one of my favorite records I’ve done in recent years. Lyrically and everything else, this record ties so much into my life and where I am at right now. This is exactly where I want to be.

I just have one more thing to ask you. I saw you and Mark jamming with Bumblefoot and Brian Tichy for the ‘KISS Alive’ gig at the Whisky. How did you get involved with that? I thought it was really cool to see the rock n’ roll side of you.

Well, the four of us grew up on KISS, and a friend of ours was doing a cancer research benefit up in Canada. He asked us to do a couple of songs together, so he sent the tracks to us, Bumblefoot got involved and we became friends, and then Brian has always been friends with everybody in the band. It was during the week of my birthday and we decided to make it the Rex Brown birthday bash and do some shows. There aren’t any more down the line, but we just played all the old KISS stuff. Those songs had just killer riffs back in the old days and that’s what we grew up on. As far as right now, my main focus is Kill Devil Hill, but that was just a one-off that we did for cancer research and it was just a lot of fun to get up there and jam those songs that I hadn’t played in years. I was actually singing on half of them. I can do a mean Gene, you know.

Check out some live photos from Kill Devil Hill’s show at the Slidebar in Fullerton CA on October 27th, by Brad Worsham: