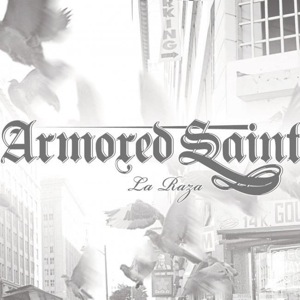 Very few bands symbolize the true Los Angeles metal spirit like Armored Saint does. The band has been around since the early ’80s, and have maintained a strong cult following among fans in LA and beyond. Starting with a self-titled 3-song EP in 1983. each of their releases is legendary in its own right. Most recently, they put out their sixth full-length studio album ‘La Raza’ in early 2010, have been doing the occasional gig here and there, and are working on a new album as of now. Amidst that, they’re also playing a special short set at the Paladino’s club in Tarzana CA next Friday August 16th 2013. A couple of weeks ago, I spoke to bassist Joey Vera to discuss this upcoming show and to get a short update on what Armored Saint has been up to. Read the conversation below.

Joey, it’s good to have you on Metal Assault again. In this interview I’m mainly going to talk to you about Armored Saint’s upcoming show at Paladino’s. First of all, for people who might not be aware, tell me who this charity show is for and how did you get involved?

Yeah, we were asked to participate in this benefit show for David Brown, who is the drummer for LA cohorts Sound Barrier. We’ve been friends with these guys since way back. We basically started out our bands at around the same time. David has contracted a form of colon cancer and has been going through chemotherapy. It’s been a very difficult thing for him to go through with his wife and kids. So, as with most people when they have this kind of a situation it puts real stress on their home lives. So the singer Bernie K hit me up. We hadn’t spoken for a while but he contacted me and let me know about this situation and this show. He asked if we would like to be involved. We are always ready to help out friends and stuff, so we couldn’t say no, of course. Hopefully it’ll be a fun event. It’s at Paladino’s, and I believe the situation is more kind of a ‘jam all day long’ thing. A bunch of different people are coming up to play. Armored Saint is not really doing a full set. It’s not like an Armored Saint show per se, but we are going to play some songs and the whole band will be there. We’re just trying to raise money for Dave and his family to help pay the medical bills, which has been a difficult thing for them, obviously. So there’s going to be all kinds of things. The ticket price is only 15 bucks, and all kinds of different bands are going to be playing there. Our guitarist Jeff Duncan’s other band DC4 is playing. I believe Roy Z will be playing there, and a bunch of other people too. It’s going to be a good time and hopefully people will come out to support this cause. Armored Saint is also donating some merchandise from past shows, so that’ll be available for sale as well. The event will be a bitter-sweet thing but hopefully it’ll all be positive in trying to raise money for Dave to get the care that he needs and move on with his life. 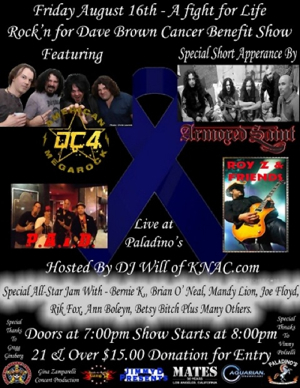 Right, that’s very well put. The Paladino’s is an interesting choice. That’s a place where you have a lot of the cover bands and jam-type events and it’s appropriate for you to do an all-star jam there. That’s what it’s mostly going to be like, right? Armored Saint is not doing a full set, as you just said.

Well, I don’t know what to expect to be honest with you. The only thing that we kind of agreed to do as a band is to go up and play a few Armored Saint songs. We’re not even bringing our full gear or anything. Jeff’s playing with his group DC4, and Gonzo and Phil have also agreed to jam with some other people. You never know who is going to be playing what. The idea I think is to have it sort of like a party, very loose and it’s not like a serious gig or anything. So we’re trying to go in there with this attitude of having a good time and raise some money for a cause.

As you mentioned, this charity is for the drummer of Sound Barrier, a cult band that has been around for pretty much as long as Armored Saint. Did you share the stage with them and play shows together back in the ’80s?

Yeah we did! I remember one particular show we did with them at the Roxy, back in what must have been ’83. You know, we were always friendly with these guys because back then we kind of had more in common with them than the guys in Ratt per se, or WASP or whatever (laughs). We kind of got along well with bands that were a little bit more underground, and Sound Barrier were right there with us. I personally gravitated more towards a friendship with Bernie the singer and Spacey T the guitar player. I was closer to them than the other guys in the band. Back then, there was no ‘scene’ yet. It was just happening at the time and it wasn’t like it was past tense. We didn’t really know what was going on until after the fact, several years later. So when it’s happening in the moment, you’re just connecting with people, hanging out and just being a part of it. That’s really all what we did back then. So we got a kinship with a couple of bands that were coming up. Black N Blue was another band we hung out with, and some of the guys in Bitch too. I believe Betsey Bitch is actually going to be playing this thing at Paladino’s as well. So we had this kind of local kinship back then. It’s been hard to stay in touch with a lot of these people through the years as everybody goes into different directions, but it’s going to be a fun thing to see everybody again.

Since I have you, I’m going to quickly ask you this. Is there anything Armored Saint has been doing in the past year or so, or if you’re even ready to talk about that?

Well, we started writing this year for a new record. We decided that we didn’t want to wait another ten years to make a new record (laughs), so we’re trying to work this out as a group. John and I started working on some songs in February this year and I got a bunch of stuff that came out really quick and we wrote a few songs in February-March but then I had to kind of put it on the back burner because I got involved with several mixing projects and then of course the Fates Warning which took up a lot of my time, learning the material and then obviously recording that. The Fates Warning record is finally done and is coming out in the US this fall, but John and I resumed writing in early July and we have a good chunk of songs now. We’ve got about five that are done, and another six that are almost finished. So we’ve just got to get back to it and our goal is to try and get this finished before 2018 (laughs). In a perfect world, it would be great if we could have the album out by fall of 2014. It’s not set in stone yet but that’s what we’re shooting for right now. 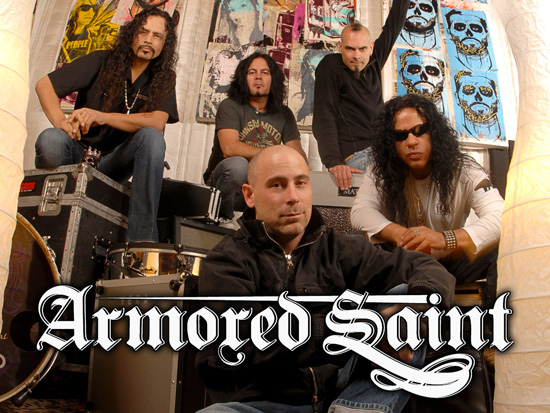 That’s good to hear! It won’t be another ten years then. So, obviously you play one show in LA every year. I saw Armored Saint shows in 2009, 2010 and 2011, but I missed your gig at last year’s Metal Blade 30th anniversary show because I wasn’t in LA at the time. How was that show and what do you recall from it?

It was pretty phenomenal! It was a great event, and for us to be involved in something like that was incredible, celebrating 30 years of Metal Blade and 30 years for us as well because our band is about that old. So it was a good time. We came out and brought some surprises, and we wanted to make it more like a party situation and a little less of an Armored Saint show. So we invited some friends out to jam with us. A lot of different people came up to play songs with us. It was a really cool night. It was pretty magical and it went by much faster than I was hoping for. It was over because I knew it (laughs). I wish it went for longer so I could soak it in more, but it was really fun.

Awesome, man. I have just one more question for you. Have you had a chance to check out any good LA shows recently?

Well, I still go to shows but not as many as I would like. But whenever a band that comes through town that I really want to see, I usually make an extra effort to go. Coming to my mind from most recently is I went to go see Opeth play at the Canyon Club. It isn’t really LA but it kind of is, out in Agoura Hills. It’s actually closer to my house than it is for me to drive up to the city. I wanted to go see them at the Roxy as well. I’m a big fan of that band, so when they came to the Canyon Club and it was only 15 minutes away from my house, I really had no excuse to not go. It was great. And like I said, I try to go to any shows of bands that I’m really interested in seeing.