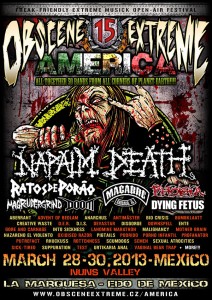 The Obscene Extreme Festival was set up in the Czech town of Trutnov in 1999, and after 14 successful years of building up this true metal underground festival and making it bigger every year, this year sees a massive expansion as it’s going to Asia, America & Australia for the first time ever. OEF America is set to take place in Mexico on March 28th-30th, and will feature the likes of Napalm Death, Dying Fetus, Doom, Phobia and several others. This festival does not rely on sponsors, and has remarkably maintained its integrity throughout. A few days ago, I caught up with Curby, the organizer of OEF, to talk about all things pertaining to his involvement in OEF. Read his interesting story below, and check out the dates, full lineups, ticket info and everything else about the festival using the links at the bottom. You can also click on the posters included here to view them in a bigger size.

Your festival started out in 1999. So first of all, can you tell me how you formed the idea of launching this festival in that year?

I always wanted to do a big grindcore festival…there wasn’t anything like that back in 99 when I started with Obscene Extreme…my big influence was the Fuck The Commerce festival, I was there in 98 and it was simply an excellent festival, and it was one of those things that kicked my ass to do something…My first idea was doing just one festival for my 25th birthday but reactions after the first volume were so great from both – the fans and the bands that I had to continue! Now it’s an every day work, all year long, but I don’t regret all the time I invest as every festival gave me back much more…that friendly atmosphere, all those fans coming from far away, it’s simply a unique chance to meet grindcore fanatics from all over the World in a single place and enjoy some really great bands, legends of grind music but also promising new bands! 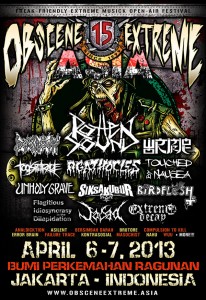 Nearly 40 bands took part in the 1999 edition. That being the first ever Obscene Extreme Festival, how much of an effort did it take to actually convince these bands to take part?

Actually I organised some tours for AGATHOCLES in 1998 and several local shows before that so I had some experiences, but this was really a huge challenge back in 1999. I was simply a beginner and I had to learn everything…but you know when you love something you can overcome many mistakes and bad decisions…and I was in contact with all the bands years before and they knew me so it helped a lot and everyone came in a good mood and also left in a good mood and mainly that reactions from the bands and fans convinced me to continue in the form of an Obscene Extreme festival!

Are you satisfied with how the festival has grown over the years, in terms of the lineups and attendance?

Absolutely! I  couldn’t imagine a better and healthier growth than that of OEF…I simply work step by step, not like wearing pink glasses and make it like “I’ll do the biggest underground festival on the planet Earth”, No way. Absolutely …I have always had a huge respect for everyone and tried to help and support as much as I could and the fans and also the bands can just feel it!

This year marks a major breakthrough for you, as you are organizing the festival outside of Czech Republic for the first time, in Mexico, Indonesia and Australia. How did you manage to expand on such a big level this year?

It’s really a tough game for me as all those 3 away festivals are in a row…but I couldn’t do it any other way because of vacation in Mexico and a dry season in Indonesia… so time is my enemy now, but I will fight till my last breath! Haha!

Do you think you’ll be able to expand even further and make it a truly worldwide event?

I have no idea, but this is a real World tour! Making festivals in America, Asia and Australia is truly worldwide or not? 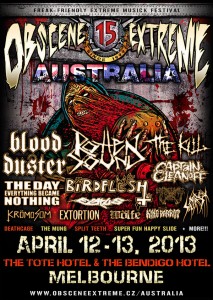 With such massive lineups, I guess there is always a risk of bands dropping out at the last minute due to their own issues. How do you prepare to deal with such situations?

This is a very good question as in Europe we have 69 bands every year and always there is someone from those 69 bands who has some really huge,  usually, personal issues that he/she can’t come to OEF…something really huge like a death in a close family or health problems, it happened last year to EXHUMED and SUBLIME CADAVERIC DECOMPOSITION and we simply invite them for 2013 and we believe they will definitely play…and also our fans in Europe understand it…for example we spent like 5000 us$ for EXHUMED for their travel expenses only so that it could be an exclusive show…but in the end they didn’t come…a real pity for all of us, but not the end of the world…

This year we booked almost 200 bands for those 4 festivals so you can imagine that I’m really nervous if everything goes as we wish…on the other side, there are things that you can’t influence…I have always been playing a fair game with our loyal fans , announcing those bad pieces of news as soon as possible etc., so I believe people understand us…and understand bands as well, they really like to play OEF and for them it’s even worse news if you understand me…

Looking at the past lineups, I’m glad to see that you maintained the integrity of the festival and restricted the lineup to the pure extreme metal bands only. Were you ever tempted to go the ‘commercial’ route and include the more popular bands?

No, no…this is simply my music and that’s it…I don’t care about trends, about what booking agents say could be GREAT to have at OEF…it’s an extreme music festival and it always will be…

What are some of the bands that you haven’t been able to include in any of your lineups past and present, and would love to in the future?

Too many to mention, sometimes we simply fight with budget so for us it is impossible to book such great bands as CARCASS or BOLT THROWER…love them both but CARCASS fee is just a way too fat for us…if we don’t want to involve sponsors we simply don’t have that…and BOLT THOWER, they play one festival per year and always in Germany and we don’t want to move OEF to Germany haha…and there’re more of them, like REPULSION, I have been trying to book them for the last 5 years but no luck at all and now I can see they will play at Neurotic in 2013…I mean what can I do? Not much, just keep grinding…also IMPETIGO could be awesome or AUTOPSY… 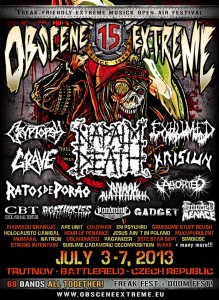 In terms of the ticket prices, have you been able to find the right balance between attracting the audience and still keeping it a profitable business?

Surely yes, this is a very uneasy thing to be honest. To build a festival city for an open air festival as we know it from the Czech and make it comfy for the fans is very expensive…but then the atmosphere is very different from indoor shows. Actually every year it takes a long time to determine the ticket price, I remember just a few years ago we had one ticket for 20 euros only!  This balance is very important as our fans are the most important sponsor so of course we want to give them maximum for their money…and yes, OEF is in credit every year and so I can work on it all year long!!!

The great thing about your festival is, you have never relied on sponsors, despite the underground nature of it. Do you intend to always keep it that way, or would you welcome interested sponsors?

Our loyal fans and supporters are the most important part…we respect them a lot, we communicate with them all the time, I simply answer every question, everyone can find me on facebook, email and contact me…simply very transparent…I mean we have a brewery as a sponsor couple of years but on the other side we buy lots of beer from them every year so it’s good for both of us…but believe me we really care about our fans and this is a very healthy way, we don’t feel this so called “crisis” much…

OEF is very different from any other festival in the Czech, Europe and we can say also World,…so there’s no special competition at all, we just want to do our festival better and better every year, that’s really important! We will never stagnate! That’s why we have prepared a DOOM festival for this year volume with a special doom night as we love this music and these bands do not fit our classical OEF  schedule…but back to your question, the Czech republic is full of open air festivals, we are a small country but we have a metal festival every weekend in summer, the same in Germany so there’s a lot of festivals around… 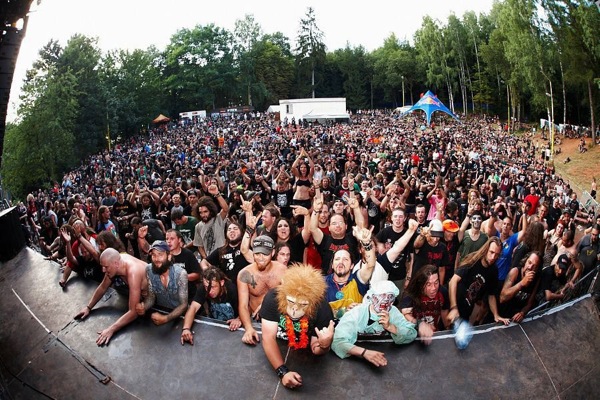 I keep reading about so many big festivals taking place in various parts of Europe, and the smaller festivals are also growing every year. Do you think that’s a good thing, or do you think it will lead to a situation of having too many festivals at some point in the future?

(Laughs) In my opinion we already have too many festivals every weekend…almost everyone thinks he can do a good festival, I just say good luck but it’s not so easy as it may seem sometimes…there’s too many too similar festivals and that’s a real problem I guess.