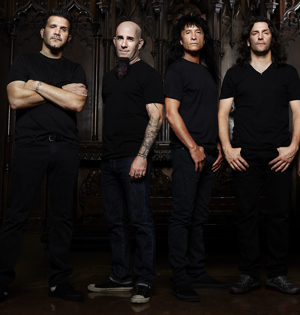 Thrash metal giants Anthrax have been a non-stop touring machine ever since the 2011 release of their mega-successful tenth studio album ‘Worship Music’. In the process, the band has played shows all around the world, and are now ready to embark on another North American headline run, this time leading the fantastic Metal Alliance Tour package alongside support acts Exodus, Municipal Waste, High On Fire and Holy Grail. Anthrax will be performing their classic ‘Among The Living’ album in its entirety. To coincide with the tour, they’re also putting out a covers EP titled ‘Anthems’, and having heard the entire thing a few times, I can safely say it’s going to be an enjoyable little piece of music for Anthrax fans to grab onto. Earlier today, I spoke to drummer Charlie Benante to discuss all these things. Check out our chat below, along with a taste of the Anthems EP, and the Metal Alliance tour dates.

What are you up to these days, man? Just doing press for the tour?

Yeah, pretty much. And I’m also doing some artwork for t-shirts and stuff like that too.

That’s cool. So, you have this Metal Alliance Tour coming up which should be awesome, looking at that lineup.

Oh yeah. For me, going out and playing this Among The Living record, which is one of our biggest records, playing that in its entirety is a little bit of a challenge but we’re going to do it!

Usually you’ve been playing at least three songs off of that album in your set anyway, but this time you’re playing the whole thing. How much of a challenge is it actually, and how much did you have to prepare to play these songs?

I’ve been actually preparing for it, because one of the songs we haven’t really played it live. So you have to relearn how to play it and see what type of approach you’re going to put on the song too, because it’s a very, very fast song. So, I have to kind of pace myself, and it’s a challenge but I’m sure I’ll pull it off.

You’re going to play club venues across North America, which I think is perfect for Anthrax even though you play bigger venues when opening for other bands. The vibe is that much better.

I guess we just want to go and sell these places out, and basically see how that goes. Honestly, I don’t care where we play (laughs).

On this tour, your main support act is Exodus. When was the last time you did a full tour with them?

They’ve done a show or two with us here and there, but a whole tour I have to say it goes back to the late 80s or early 90s, you know. So it’s been a while since we played a full tour with them. But I’ve actually been seeing Gary Holt quite a bit. Gary has always been one of my favorite guitar players and he’s just a great guy.

The Metal Alliance lineup as a whole is just pure metal, I would say. When you play big festivals, may be there are some bands who are more ‘commercial’. But this lineup is for the metalheads. Would you agree with that?

It is a very metal lineup. I can’t really judgement on all the other bands yet though. I just want to see them in their own environment and see them play, and only then will I be able to get an idea about them on my own. 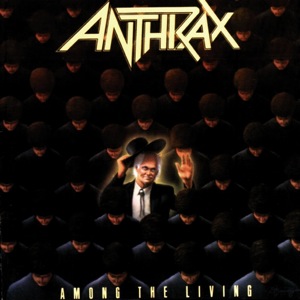 Right, fair enough! Coming back to ‘Among The Living’ and playing it in its entirety, lately a lot of bands have been doing that with their own classic albums. Did this come about because other people were doing it?

Well, we actually did this back in 2005 but we played a big chunk of the record and not completely every song off of it. We may be left off one song. So to me this has always been a bit of an interesting concept to go out and play a whole album or a whole album side or whatever, and I remember back in the mid-90s or end of the 90s, Cheap Trick were doing it. They were playing the first four records, which I thought was great. They would play every song off of one record each night, and I thought that was killer!

That does sound killer. Would you do something like that if ever a chance came up, of playing more than one Anthrax record in their entirety?

Wow, yeah that’ll be a bit of a challenge to say the least, but the idea is cool, for sure. 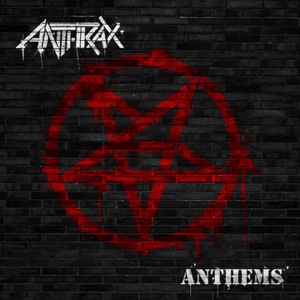 Coming to this new release of yours which is coming out in a couple of weeks, the ‘Anthems’ EP which has six covers, the Worship Music track ‘Crawl’ and its remix version too. How did that come about? I think a few members of Anthrax have been talking about it for a few months, so is it something that’s been in the works for a while?

What happened was, we would always record B-sides and stuff, and we had a bunch of them that were recorded musically but we didn’t really finish them. Then we were talking, and I said we should really do something with these and may be do a bit more. So I mentioned Rush, and ‘Anthem’ was the song that came out. Then we were talking about more songs and the Journey song came out. So I said I’m going to record these, do the drums and everything, and then I’ll put a scratch guitar part on it and send it. So I sent it to Scott and then Frankie got it and Joey got it, and then we just finished all the stuff that way. We were so happy with the way it was turing out that I was like, ‘Wow, I bet our fans would really like to hear this!’ And that’s how it happened. But we wanted to keep it as an EP and not a full record because we wanted to have it priced very well, you know? I mean, originally I jokingly said let’s charge $6.66, but iTunes wouldn’t do it.

Why wouldn’t they do it? Was it because of the 666 thing?

Well, they said it wasn’t because of the 666 thing, but just due to the way their pricing works, $6.66 would not work within their system, which is like bullshit, come on! 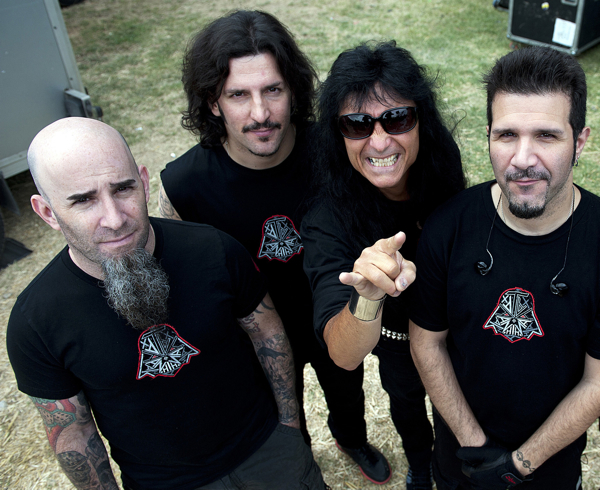 You mentioned a couple of songs that you had suggested, but did the rest of the band have inputs for the cover selections?

Oh yeah, everybody had input on it, of course. Joey really wanted to do ‘T.N.T’. That was one of the songs he really wanted to cover, so we did that. A few years back, we recorded  ‘Whole Lotta Rosie’ and also played it live. I thought we could put that on, but we went with T.N.T instead.

Would you be playing any of these covers on the Metal Alliance Tour?

It would be great to go out and just play Among The Living and then play a bunch of cover songs and say ‘Good Night!’ (Laughs) But other than playing Among The Living, obviously, we haven’t decided what we’re going to do exactly, as of yet.