After a five-year gap since their previous release “The Alchemist”, Swedish psychedelic doom rockers Witchcraft are now finally ready to release their fourth album. “Legend” comes out in North America on September 25th via Nuclear Blast Records, and presents a new-look five-piece lineup with frontman and founder Magnus Pelander giving up guitar to devote his entire efforts to his vocals. From starting out as a Pentagram tribute band to now, the band has truly come a long way, and “Legend” presents a new facet of their musicianship. A couple of days ago, I had a chat with bassist Ola Henriksson to discuss the lineup change, the process behind “Legend”, and plenty of other things. Read the conversation below, check out the album preview using the YouTube player, and visit the band’s facebook page to stay in touch with them.

First of all, I wanted to ask you about the new lineup. Magnus is not going to be playing guitar anymore. That’s a pretty big change for the band. What’s the reason for that?

Well, the thing is, Magnus has been wanting to drop the guitar for a couple of years now, and just focus on the vocals. When we found two new guitar players, it was an easy decision for him to do that. And I think it sounds better, he sings better and the guitars sound better too. There’s focus on the vocals as we the guitars, which is what makes it better now.

I was checking out the album, and I would say there’s more of a classic rock type of feel to it. Would you agree with that?

Yeah, I’ve never considered us a doom metal band. I always saw us as a heavy rock band, because that’s what it is to me.

But do you think there’s still enough in this for fans of previous Witchcraft albums? 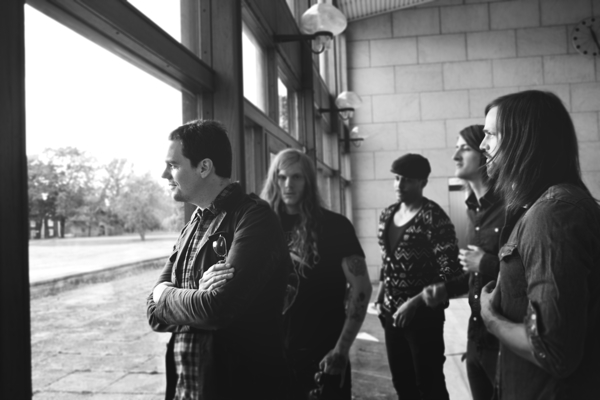 Interesting. It’s been five years since The Alchemist was out. Is that a good thing because perhaps the fans can see this as a new album on its own and not compare it to the older stuff?

In a way, but I guess people will always compare this one to the rest of the albums, and they should, because it’s the same band. It’s a different lineup for sure, but still the same band.

You guys put up the album sample on YouTube and a lot of people are responding to it. Does anybody from the band read that stuff at all?

I usually don’t read that much about those things. First when we released the single on facebook, I read the comments and there were a few comments about us changing our sound too much, selling out and stuff like that. But I don’t bother that because once they hear the whole album they will realize it’s Witchcraft, and not something completely different, you know.

Yeah, I agree with that. This is your first album on Nuclear Blast. Since you signed with them, how have things changed for you guys?

Well, the difference is that this time around, for example I’ve done may be 15 phone interviews before the album gets released, and that is something I’ve never done before. So clearly the PR is a lot better, and they have the funds to help us achieve what we want to achieve. We had the opportunity to work with producer Jens Bogren for this album, and that’s something special for me because he works with really worked with bands. So, it feels good for me.

I was going to ask you about Jens Bogren. He has worked with Kreator, Amon Amarth, Opeth and many others. It’s interesting that he worked with you, because most of those other bands are extreme metal bands. Did his presence have any impact on your sound, or did he just let you do things your own way?

He has that skill of seeing what a band does good and what they don’t do as good. He let us do what we do best, and then enhanced it in his own way. He brings out the best in everyone. I could never be a producer or anything like that because I would be too frustrated, but he’s like a patient teacher almost, and a super professional. I think he brought out the best in us for the recording.

That’s very cool. So, for the first few albums, I think you used a lot of vintage equipment to get the old-school type of sound. Are you still doing that?

No, in a way we kept it 50-50 this time. The recording equipment might not be as ‘vintage’ now because it was a hard-drive recording, but the amps, microphones and mixing console was old stuff. But to make stuff sound good, you need to combine it with new stuff. Actually the thing with the first album was, it was not exactly vintage equipment. It was just what we had, and then we tried to make the best of it. So, sometimes you can hear the difference.

There was a long gap between The Alchemist and this album. A few members of the band were doing other stuff. What were you doing during that time? I think you were also in some other bands.

Yeah, I’m still in Troubled Horse. We’ve been around since forever, it seems like. And also had a bluegrass country band as well (laughs), so I kept myself occupied. And I did a solo thing as well.

Witchcraft started out as a Pentagram tribute band. When you play shows, do some people still ask for Pentagram covers?

Yeah! They did when we toured a couple of years ago, and I’m thinking they’re going to do it this time around as well. And whether or not we’ll play any, may be we will, may be we won’t because the new guys haven’t really listened to Pentagram at all. So it could be fun for them too.

By September 25th, the album will be out in most places around the world. What are you planning after that in terms of tours?

We’re touring Scandinavia this fall and then after the new year, we’re touring Finland and the rest of Europe, followed by the US. We’ll try to do as many festivals as possible next summer and complete Europe by doing another tour again. And we’ll see what other continents we can get to. That’s the main plan.