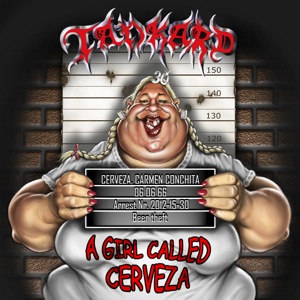 German ‘alcoholic thrash metal’ legends Tankard have been around for a long time now, consistently doing what they do best. They are into the 30th year of their career, and on July 31st they released their fifteenth studio album “A Girl Called Cerveza”, their first on Nuclear Blast Records, as part of the celebration. I recently spoke to vocalist Andreas “Gerre” Geremia, to talk about this album, their plans for the 30th anniversary, and a few other things. Read the conversation below, check out the lyric video of the song “Not One Day Dead” from the album using the YouTube player embedded near the bottom, and visit the official Tankard facebook page for more info.

Your 15th studio album came out a few weeks ago. First of all, can you briefly tell me the idea behind the album title and the story?

It’s not a very long story. We were playing for the very first time in South America, I think it was in 2007, and our bass player just talked about some nonsense that a girl should like cerveza or something like that. Our manager kept it in his mind, and when we got together to talk about the next album title, he really remembered that and we felt that this album title is very funny, and really fits Tankard. That’s all there is behind that.

Your album covers usually have beer in them, but interestingly this one doesn’t.

Well, if you really look into the eyes of this beautiful woman, you will see that she is the sister of the king of beer, if you can remember the Kings Of Beer album. There was a good friend of us on the cover of that album, and he was also painted on the cover of “B-Day” and “Thirst” albums, and on the “Open All Night” DVD. So this is his beautiful sister (laughs).

You’ve always had this alcoholic metal theme. When you were starting the band, why did you decide to go with that theme?

It was back in 1985 when we recorded our second demo tape “Alcoholic Metal”, and this was just really a joke because at that time in the middle of the 80s, a lot of different kinds of metal had grown up, like speed, thrash, black and power, and we really did a joke out of it. Later on, with albums like “Chemical Invasion” and “The Morning After”, we really did a lot for that kind of image. Later in the 90s we wanted to get rid of this image, but that didn’t work (laughs). So nowadays the way we see it, we kind of do something like a parody of our own image and don’t take ourselves too seriously.

Exactly, that’s the way to do it! So, this album is also your first on Nuclear Blast, which is awesome because there are bands like Kreator and Destruction, and old-school German bands like Accept on the label. It must be a kind of reunion for you to be with those bands on the same label.

Yes, our old record contract with AFM Records was over, and we had different possibilities for a new contract. The A&R guy at Nuclear Blast is a big Tankard fan since the 80s, and he really wanted to have us. So yeah, we met together and everything sounded very good. So we are very glad to be on Nuclear Blast. They have a lot of power, specially concerning the promotion stuff, and I really hope that this will be the next step forward for Tankard.

Do you think you’ll tour together with some of the Nuclear Blast bands, now that you’re on the label?

That would be great, but the problem is, all of us in the band have regular jobs and of course we spend all of our free time on the activities of the band, but at the moment it doesn’t look like we can play a whole tour for the new album. We’ll play as many single shows as we can. We play a lot of festivals and we like to do it that way. But may be, if there is an offer or something like that and if we have time, of course we can do that.

Coming back to the album, you had Doro Pesch as guest vocalist on the song “The Metal Lady Boy”. What was it like working with her?

It was very funny because I’m a big Doro fan since many, many years and last December I went to her concert in this area here. There were some friends, we had some beers. During the concert I was standing in the front row, and she saw me and said, “Oh, Gerre from Tankard is here! Please come on stage and sing along with me!” So I got up on stage to sing a little bit of “All We Are” with her, and later on in the backstage room the idea came into my head, that I’ve got to ask her if she wanted to join us on our next album. I said something to her about a love song (laughs), and I sent her the demo. She liked the song and finally she did it. She recorded it in another studio and just sent off the files to remix them together, but I think it really fits and it’s one of my favorite songs on the album.

I think the music on this album is catchier than your last couple of albums. Would you agree with that?

I think we always try to do catchy verse-chorus parts. We still have a transparent sound like we do on “Vol(l)ume 14”, but I think the guitars are much heavier. It’s still thrash metal, with some melodic parts and very catchy chorus. At the moment we are really satisfied with the result.

You usually put out albums every two years. There’s one thing I’ve been curious about, have you ever taken any of the songs written for the previous album that were not used and tried to re-work them into the new one?

No, every time we start fresh, and with Tankard we always have the ten songs when we go into the studio. There’s nothing left. The last album was out at the end of 2010 but this year we really wanted to have something out for our birthday. It’s 30 years of Tankard, and there must be something out. We will see what’s up for the next album, but I think it’s a lot of work to write enough songs to bring out a new album every two or three years, to prepare everything before you go to the studio, and we always have a lot of time pressure. But then, if you put out an album only once in ten years, that doesn’t make any sense. The fans always want to listen to new material, but at the moment there are no plans for the next album (laughs).

Are you planning anything else specially for the 30th anniversary or is it just the album release?

You also played the 70,000 Tons Of Metal cruise in January of this year. How was that experience?

It was a really cool experience. It was just four days of partying round the clock. The first band started at 10 o’ clock in the morning and the last band played at 4 o’ clock in the night! We got to see different stages and everything was mixed, from musicians to fans. It was a very cool atmosphere. For our new album, there is a limited edition containing a DVD with a video clip for the title track “A Girl Called Cerveza” which is on YouTube already, and a bootleg filming of our second appearance at the 70000 Tons in the middle of the night on the pool deck, along with an interview. So there you can see that we had a lot of fun being part of the cruise.

As you said, you have some shows coming up in October, and I think you’ll be visiting some places for the very first time. I’m sure that’s always an exciting feeling to play in such places where no one has seen you before.

Yeah! We never played in Prague or Hungary before, and it’s always exciting to travel to countries you’ve never been to, to play there and to party with the fans. This is the most amazing part about playing in a band, you know, traveling around. The heavy metal community is worldwide and there are still a lot of countries left to play, so don’t think that we’re going to stop so soon. We’ve already reached the first 30 years and now we start the next 30 (laughs).

Basically, you’ve been doing this for 30 years, as you just said. Do you think you’ll simply continue playing for your whole life and this is the only thing you’d ever want to do?

Yes, of course I know that we’re getting older and older, and not getting any younger. But for me personally, I really could not imagine life without Tankard, life without going on stage and playing shows, and having good times with fans and friends. So I think the most important thing with Tankard is, we still have a lot of fun playing this kind of music and if we have this much fun in 15 years from now, we’re still going to continue doing it. If there is one day the fun is over, then we have to stop. But I don’t think that will happen so fast.

Lastly, I would like to ask you a question which you might have been asked before, but since I’m dying to know, here it is. Being the leader of the alcoholic metal band that you are, personally what are some of your favorite beers?

It’s always the beer we get in the backstage room. This is the only intention of Tankard, to travel around the world and taste as many different beers as possible (laughs).