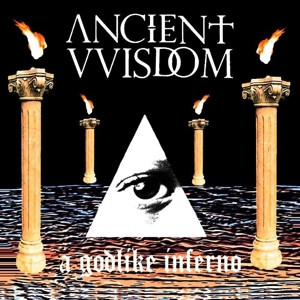 Ancient VVisdom is an occult rock group from Austin, Texas. They started out in 2009 and have made rapid progress in their musical journey, releasing a full-length titled “A Godlike Inferno”, followed by a 12″ split EP with Charles Manson titled “Inner Earth Inferno”. The year of 2012 has been great for the band, having kicked it off with a North American touring run supporting Ghost. The full-length also got re-issued on Prosthetic Records in April, and then they went on a European tour. Recently, I caught up with singer-songwriter Nathan Opposition to talk about the band’s recent adventures, the album & lots more. Read the conversation below, check out a music video of the song “The Opposition” off of the album using the YouTube player embedded near the bottom of this page, and visit the Ancient VVisdom facebook page for more info.

You guys have had a pretty amazing year so far. You started it by touring with Ghost. What was that experience like?

Thank you very much for saying that, man. It was an excellent tour. We had a fucking great time. Those guys are really awesome. They are great musicians and we really had fun with them, hung out and got to each other. We had a blast, and it was good for Ancient VVisdom to meet new friends and make some new fans. People really appreciated it on the tour and it was a great time.

They had such a big hype around that tour. People were waiting so eagerly to see them. What was the response from the Ghost fans to your set?

Overall, we had a great crowd response. We had a bigger reaction than I was really expecting. We also had people who were kind of expecting something heavier too, something with a little more kick to it. So some people were not sure what they thought of our band, but all in all, the response we got was mostly positive, and that was great for us because it felt really good to play in front of all those people who’d probably never seen us before, us being such a new band. 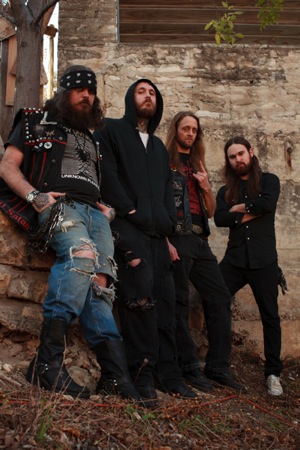 After that, you did some other really cool shows as well. You did the Roadburn festival. I guess that must have been a totally different thing as compared to the North American tour.

That was amazing. Roadburn is one of the most amazing events, well-orchestrated and all those venues sound great. Everything was just really well put together, and all the bands that were on the bill were great too. We got to meet some really cool bands and see some really cool stuff. I got to see Michael Gira from Swans and we were hanging out with the guys from Year Of The Goat. We were sharing a dressing room with them, so that was really cool. There were some great up and coming bands as well. Amazing experience, all in all.

This year you signed with Prosthetic and they re-issued your debut album. That must have been good because now it’s getting a wider distribution.

Yeah, absolutely. We met up with them on the East Coast during that tour with Ghost and they were talking to us then. They seemed really excited to get a chance to talk to us, and we were just as excited to talk to them. Then it just kind of worked out because we did a show in LA too, and we got to meet their West Coast folks as well. We didn’t give an answer right away because we were kind of talking to other labels at the time too, so we didn’t want to go one way or the other at that point. But they [Prosthetic] showed so much enthusiasm in Ancient VVisdom and about the record, that we just decided that those are the guys to do it with.

When they re-issued it, was there any difference from the original release in terms of the packaging, track listing or anything like that?

It has all the lyrics and the credits. There’s definitely more hard work in it. The original edition was really stripped down. So the re-issue is really great, and it’s good to be able to read the lyrics too. That’s one thing which is very important to the songs. My lyrics are pretty audible, but it’s also nice to just be able to read along to them.

You’ve already done quite a lot of touring this year, but what else did you do in terms of gigs, or otherwise?

Well, we did the Free Press Summer Fest in June. It’s 2-3 days of shows and the headliners are Snoop Dogg and huge artists like that, so it was crazy for us to be a part of something like that. But it was a lot of fun, and pretty massive. Then we worked on our new record, and now we’re planning on doing a fall tour. We definitely have some stuff in the works for the fall, and we have a lot of new material that we’re working on recording too.

That’s great to hear. So you already have enough new material for the next album?

Yeah, we pretty much have the next album mapped out. We have a lot of material between all members of the band, and each of us brings something to the table. We’re going to take a bunch of different songs from each person and just kind of mix them up together. We have a lot of different ideas, and plenty of material backed up .. in the mind catalog, if you will (laughs). That’s where we stand with that. We have finished material right now, and we just want to keep going with it, keep the ball rolling and keep up the momentum.

You mentioned the Free Press Summer Fest, and you’ve already done various different kinds of shows. With you style of music, would you say that you’re able to cross over between different genres and play any kind of show?

It’s interesting because a lot of people from different backgrounds of music, they like our stuff even though that’s not exactly what they’re into. So we get a lot of metalheads, but we also get people who like grunge. We get older couples, and all kinds of people. I guess you can put that down to that fact that we incorporate a lot of different sounds into our writing because we listen to so many styles of music. People recognize that to a certain degree and they hear something they like. They’re not sure what it is, or what it reminds them of, but it’s there, you know. So we definitely have the potential to play a lot of different shows with various kinds of bands because we appeal to those audiences. It’s pretty interesting for us, and it kind of leaves everything open and boundless, to be just be able to roam freely.

Where did this musical style of yours come from? What drew you towards playing this kind of music?

I really started just writing some solo stuff on acoustic guitar, coming up with ideas for some melodies. I needed another person to play along with me in order to start a band. And then my brother Michael moved to Austin. We jammed together, and for me it started making more sense. When it started to happen, we were just casually writing, hanging out and doing whatever we do, playing some tunes, and we recorded some stuff. From there it finally became something which we could release. We kept going with it because of the response we got. When people who enjoy music give you some sort of encouragement, that gives you the motivation to keep going.

Another thing I wanted to ask you is, a couple of years back you released a split with Charles Manson. I don’t know if it’s still in print. What’s the deal with that? Do you plan to put out more copies on Prosthetic or something?

It’s a good question, because we do own the rights to that, and I really don’t know what’s going on with the label. The label initially didn’t put it out, so I think they’ll just be releasing more new records now. So the split might be kind of an open thing, and we might end up releasing it ourselves.