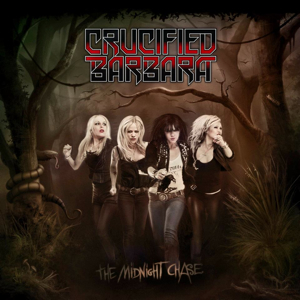 Swedish all-female rock act Crucified Barbara have been around since 1998, even though their actual album releases came about much after that, as “In Distortion We Trust” and “Till Death Do Us Party” were released in 2005 and 2009 respectively. Since then the band has performed various festival shows in Sweden and toured across European, and subsequently they signed to Nuclear Blast Records. Their third studio album “The Midnight Chase” marks their debut on the label, and is slated for a July 31st North America release. In my opinion, it’s their most definitive rock ‘n roll album till date, and their honest, straightforward and no-bullshit approach to musicianship should find them a new legion of fans worldwide. Last night, I had the pleasure of speaking to guitarist/vocalist Mia Coldheart, to discuss the album, her musical background, gear and a few other things. Read the conversation below, check out the band’s single “Into The Fire” using the YouTube player, and visit their facebook page for more info.

Earlier today I was listening to your new album, and I have to say, it sounds fantastic. So first of all, congratulations on that. Tell me about the process behind the album. When did you start working on it and how was it like?

Thank you, first of all (laughs). It’s good to hear that you like it. We started to think about working on the album right after the last one, because it’s always in our head that we have released one album and now we have to start with the next one. There is no rest, you know (laughs). But we started touring for the second album, and immediately we had the third one in line. And I remember that two summers ago I was working on lyrics for this album, but I was really upset because I lost a whole book of lyrics that I had written. So it was really sad, but luckily enough I came up with some new ones. So we started to rehearse, and tried to write songs together and also in our own studios at home. We really started putting together everything about one year ago. It’s been an up-and-down process. It’s been hard to find inspiration to keep it going for two years. But finally, in the end before we went into the studio, last three months we got some amazing energy that I’ve never seen in the band before. Everybody was together, and even though there was a lot of stress, we had positive energy and just wrote one of the best songs on the album in the last moment. So it was a long but fun process. 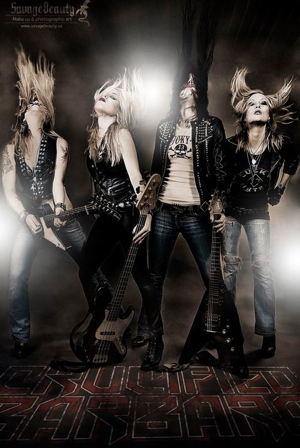 How does the writing work? Does everybody write their own parts?

Actually, we all write, but it’s not always that we write our own parts. We can always write the others’ parts also (laughs). For example, our drummer Nicki is quite good at coming up with vocal melodies and guitar riff ideas that may be me and Klara wouldn’t come up with, because we have our own way of playing and singing. So it’s good to have different inputs. Everybody gives feedback and comes up with ideas. Some songs we wrote together in the rehearsal room, and some are just made from us sitting together as a whole band and recording on the computer, and stuff. So it varies. Sometimes it’s all four of us writing and at other times it’s only one.

I think this album is pretty much a straight-up rock ‘n roll album, but you started out as a punk rock band. Would you say that now you’re completely different from what you were when you started?

It doesn’t feel like that if I think about our personalities and goals, because it’s always been the same. Our music just developed as well as we did. We started out as a punk rock band because we learnt to play where we met, really. We started with grunge and Nirvana kind of music, basic three-chord rock. From then on, we developed and discovered metal and just widened our tastes in music (laughs). So, I think it’s just a natural development.

With this album, you’re also debuting on Nuclear Blast Records, which is awesome. They do such great work for so many bands. That must be a good feeling because now you’ll be getting global recognition for your music.

Yeah, it’s amazing. It’s a dream come true, really. It’s unbelievable. We’ve been talking to a lot of big labels but it’s always been like a bad vibe that doesn’t feel right. We don’t want to go big just to get famous or rich, because we do it for the music and the cool thing about Nuclear Blast is that they’re totally into it. They don’t want to change us in any way, they just love the way we are, and they have the muscle to go big. So yeah, it’s a dream come true. 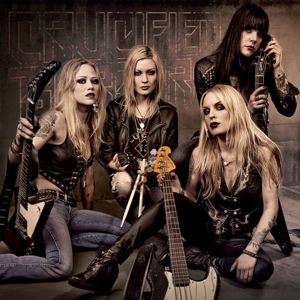 Now that the album is confirmed to release in North America and everywhere else by next month, are you planning to go on tours and promote the album in these parts?

Yeah, I think this time because it’s got such great response, we’re getting good deals in new territories and we’ll be touring even more than we did with the last albums. In the summer we have some festivals in Sweden, Italy, Germany and France, and then we go on a Germany & Switzerland tour in the fall. We also hope to do Brazil, Argentina and I hope we have some dates in the US as well, by the end of the year.

That’s great to hear. I’ve read that you’ve done some pretty big shows, and been part of some great festivals in the past. What shows stick to your mind as the most memorable ones?

For us, coming from Sweden, all the gigs we did at Sweden Rock Festival have always been special. Then I remember the first time we played Download Festival in UK for example. It’s really huge. And we played at Hellfest in France, which was also like a dream because we had heard so much about the festival, and it was really cool to be a part of it. 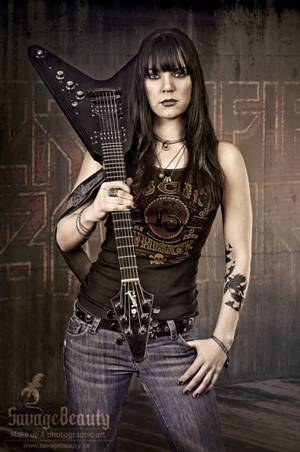 Talking a little bit about you now. I wanted to know, when you started playing this instrument and singing? What got you into it?

Well, first I started to play guitar when I was around 13-14 years old, and it was in school. I had three friends, and we were really close, and a bit like outsiders (laughs). We just started listening to Nirvana. But when you’re a teenager, you go from one thing to another every day, and one day the whole life changes. So I went from being just a radio-listening girl to discovering a new world of rock music. I started to play guitar with my friends and we started a band. We were playing Nirvana covers and then we started to write our own songs. I guess it was eight years later when I met Crucified Barbara and I joined the band as a guitar player. I didn’t really sing at that point. I was singing choir music in school when I was younger, but not really in this rock ‘n roll voice. So that started just a few months before we recorded the first album, because then all of a sudden we were out of singers. So I decided to give it a try, so that’s the story (laughs).

That’s great. So would you say guitar playing comes more naturally to you than singing?

At the beginning it was. It was really hard, and a lot of times I regretted that I started to sing, because all of a sudden I realized that I couldn’t stay up as long as the others. It just broke my voice if I partied too hard, you know. I also was disappointed in myself because I realized after some years that I wasn’t as focussed with the guitar. I couldn’t play as well, because I have to concentrate on singing and playing at the same time. Also with the voice, I had some down period. I thought I couldn’t really sing because I had the guitar and couldn’t use my body the way it needs to be used to sing really well. But now I think I’ve really found a way to use my whole body and play guitar and sing at the same time, finally (laughs). It feels really good and I love doing both. 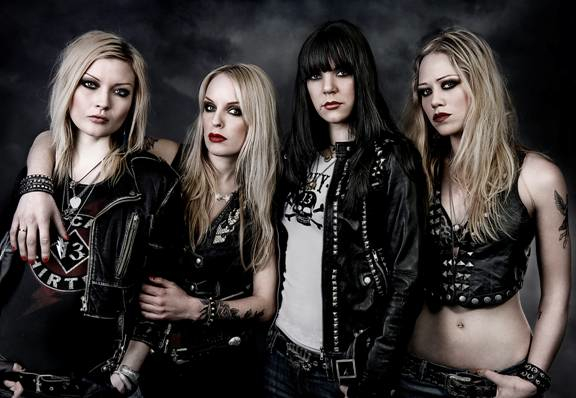 So, what did you do to overcome that problem of not being able to focus on the guitar while singing?

I think it’s been a process over years, because it also has to be in your head. You have to want to do it. And if you think it’s a problem, it’s going to be a problem. For some time, I felt bad about it, but now it’s just fun and I see it as a challenge. Before, I had to practice a lot, but I just do it now. It comes naturally, and I don’t even remember the hard times (laughs).

I was reading another interview you did recently, and you said that you like to talk about your Mesa Boogie Dual Rectifier Amplifer. So let’s talk about that! How important is it for your own guitar sound? What role does it play for you?

I can’t even describe how important it is, and I’m really sad every time I can’t have it if we play on some gig when we can’t bring our amps or get the right one. I’ve been searching for a guitar sound for all these years as a guitar player, trying different brands and it never really worked. When my friend told me to try this Rectifier amp, I tried it at a festival. I didn’t know the settings, and it was stressful. I didn’t think it would sound good, but I tried it, and may be this sounds strange (laughs), but I’ve been almost crying out of happiness in the rehearsals so many times because I come down and play this amp. It’s a great marriage with my guitar. It’s so much fun to play. So since the first time I started to play when I was 14, and I’ll soon be 32, over the past two or three years it has become fun for real now because I have this great sound that I really like.


That’s very interesting. So, one final thing I want to talk to you about is .. what happens with a lot of female bands is, they get into the whole image thing where some magazines start posting articles and pictures of the ‘hottest chicks’ and stuff like that. I really hope Crucified Barbara doesn’t get into that. Is that important for you to focus on the music and nothing else?

Yeah, absolutely. We’re totally avoiding all that hot chicks part. It’s not very common in Sweden because people don’t like that. For me it feels really strange to see in the magazines when the artists playing music are focussing on being featured as the ‘hottest chicks in rock’ (laughs). It just gets strange for me, and I can’t relate to it at all. We’re just a rock band, you know. We don’t want to put focus on the fact that we’re girls. It will bring attention to the band, but it’s not what gets us going.