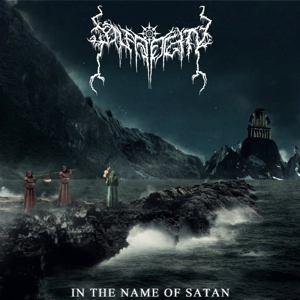 Mumbai-based black metal duo Solar Deity, consisting of Exhumation members Aditya Mehta on vocals, guitar & bass and Yash Pathak on drums, have just released their hugely impressive debut EP “In The Name Of Satan”. Brutal as well as atmospheric in equal measures, it’s a brilliant representation of the genre, and has found appreciation in the Indian underground metal scene. Very soon after the release of this EP, the band explored DSBM territory and put out the “Snowless” single. If these two releases are anything to go by, one can expect great things from Solar Deity in the near and distant future.

Besides fronting Solar Deity and Exhumation, Aditya Mehta speaks his mind on music, movies and other things via his own blog, titled Mehta Kya Kehta [translates to “what Mehta says”]. A couple of days ago, I emailed Aditya a list of questions, and just a few minutes ago, I received these amazing answers from him. Read the conversation below and be entertained, as it’ll definitely be worth your time. 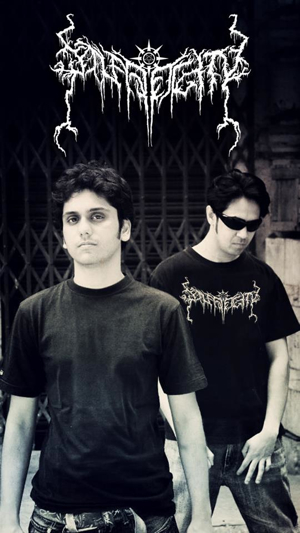 As both members of Solar Deity are still very much part of Exhumation, the first question that comes to my mind is, what was the motivation behind starting this Solar Deity side project?

I tend to say controversial stuff, so I’m going keep myself in check here.

After years of singing about everything from the devil and anti-religious stuff to psychopaths and deranged doctors to a vegetarian man eating sexy girls ass-first, if I’m asked to change a line or not sing a certain word, I won’t know what to do. On Exhumation’s “Consider This”, the songs are about the Brahmand (All That Is), beating the crap out of your enemies (Blood-Drenched Flags), global destruction (Black Plague), self-worship (Worship Thyself), a conversation between a man and the devil (Consider This), betrayal (Hell Forbid), violent sex (Absolute Power Now), and the mythological deity Shiva (Alpha Omega). I wanted to give the line ‘In the name of Satan’ the respect it deserved, not because it has the devil’s name, but because it was a line I was supposed to sing but had to change. I still haven’t sung that line; I don’t need to sing it now. I gave that line a bigger place in my life because I couldn’t do anything when it was denied its rightful place. I made it up to that line by naming Solar Deity’s debut that.

The music is quite different from anything you’ve done on past Exhumation releases. Did you start writing songs for Solar Deity with the aim of keeping the sound different, or do you think there’s an element of Exhumation in it somewhere?

Besides the music itself, the song titles are truly epic. Where did the inspiration for those come from?

They’re the kind of song titles that would make me want to listen to the songs. I think everything about a band – its name, the artwork, the song titles, the music – everything should hit the listener’s heart and move them emotionally. That’s what pure music does.

I quite like the short duration of “In The Name Of Satan”. Was that always your intention, to put out an EP for your debut as opposed to a full-length album?

Yeah, that’s exactly how I wanted it. See, I could have written seven songs like those three and put out a full-length; hell, I can make seven albums like that EP, but it would take the pleasure out of making music for me, and it wouldn’t be special to listeners either. I wanted our debut to be a burning mass of concentrated energy. There’s not one thing that can be added to it or subtracted from it.

You’ve done vocals, bass and guitar for this album, while you do only vocals in Exhumation. Did you find it challenging to handle so many things all of a sudden, or did it just come naturally to you?

It wasn’t challenging at all. It was liberating. I had the songs ready in my head, and there was no external interference. I did everything exactly the way I wanted to. So many people have told me that they can hear it in the music. 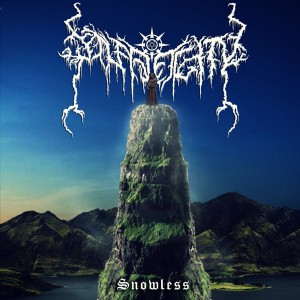 The production and mixing of the album really gives it a true black metal flavor. How much time was spent on it and how much emphasis did you lay on that aspect?

Ayan De, who owns Midicore Studios, isn’t into metal at all. So, y’know, it’s great to work with a producer who hasn’t already decided which band he’s going to make your band sound like. He’s given us this unique sound which is now entirely ours. Ayan is used to producing punk/alternative/electronica albums and he likes everything to sound huge and rich, but he understood in less than five minutes of talking to me what would work best for the music. I didn’t have to worry about it at all because Ayan made it obvious from the start that he understands sound far better than most producers who happen to be metal heads.

Will this remain a studio-only project, or do you intend to perform these tunes on stage at some point?

I don’t see myself as an entertainer, but Yash is dying to beat the crap out of his drum kit and make a lot of noise and harass trend-core poseurs in a live setting, so we’ll get a bassist and another guitarist and play shows. It’s going to be a real hassle finding the right people.

You’re a keen music reviewer yourself. So let me ask you this: do you feel most black metal bands concentrate too much on the Satanic imagery instead of putting effort into the actual music?

I think any kind of imagery is good. Psychodrama can be very enjoyable and a great release at the same time. Funnily, it’s the people who believe in ‘God’ who can never accept this. I feel like running around ringing temple bells and doing namaaz in the middle of the road and saying “God bless you” just to piss all these idiots off. It’ll be so much fun. But I don’t think I’ll be able to pull it off because I’ll be laughing too hard. Y’know something, if a band made really great black metal but came on stage wearing torn jeans and casual t-shirts, it would take away from the experience. It’d make me stay home and listen to their music; I wouldn’t go back to see their live performances.

What are some of the black metal bands you respect and admire?

I love Burzum. I love Varg Vikernes and everything he does. Call me fanboy, but I believe he can do no wrong. I find nothing but purity and brilliance in his music, actions and thoughts. After composing a tune, I wonder what he would think of it. Not that I have any intention of getting him to listen to Solar Deity. Yash loves Burzum too. We don’t sound anything like that but I keep telling Yash that our music should be as pure as his… that’s the only way I’d ever want it to be.

There is no doubt that this black metal experiment of yours is a successful one. Will this inspire you to explore more musical styles in the near future, perhaps as a different project?

I don’t see this band as an experiment. I have been 100% sure of it since I announced it on my 30th birthday. Solar Deity is the band with which I will realize my vision. It is one of the purposes of my existence. Yes, I’m going to make a lot of music. I’m going to make some death metal because I miss growling and palm-muting and making songs about violence and horror and bloodshed and anti-theism.

Solar Deity is not antigod in any way. It is and will always be pro-Satan. So, for all my love of horror and gore and to stress on absolute hatred for god and religion, I’ll have the death metal stuff that I’m going to do when I get some time off from Solar Deity. And later this year I’m going to get Angry Dwarf going, and that’s going to be fun.

Moving away from the main topic a little bit here, but I’m sure you’d agree that alcohol, specially beer, has always been a part of heavy metal culture all over the world. That’s why I used to read your beer reviews with great interest. I hope you don’t mind me asking this, but what led you to quit drinking?

I’d been smoking (cigarettes, beedis, grass and hash) and drinking (beer and whisky) for many years. I enjoyed taking drugs (especially LSD) and drinking alcohol, and these intoxicants taught me a lot, but they were also keeping me from doing other things. I quit smoking completely three weeks after Consider This was released, because I had to make myself very strong mentally, physically and emotionally for what I was about to do next. Last December, just before the part season began, I swore off alcohol and got my fire and drive back.

I used to love sitting around in bars. Everyday there was someone who wanted to have drinks with me. After three weeks of drinking with people, I’d take off and drink by myself – that was my ‘me time’… evenings that I could spend drinking with my favorite person: myself.

Not all people who drink alone are alcoholics. I always preferred drinking alone because people tend to bore me. With annoying company I used to drink a lot, but when I was by myself I could have half a quart of whiskey or a couple of beers and call it a night.

Even Yash has quit smoking and drinking, by the way. We were regulars at quite a few bars and used to tank up like motherfuckers. Now we go to Natural and discuss black metal over scoops of ice-cream. We go to the Juhu outlet because a lot of hot girls come there.

During your drinking years, which were some of the best beers you had the pleasure of tasting?

Oh man, there were quite a few, and all the ones I love are very different from each other. And you should be telling me about all the beers you’ve tried, because there’s a lot more beer where you are! I love people telling me what they ate and drank, but not when they make a habit of announcing it on Facebook and Twitter!