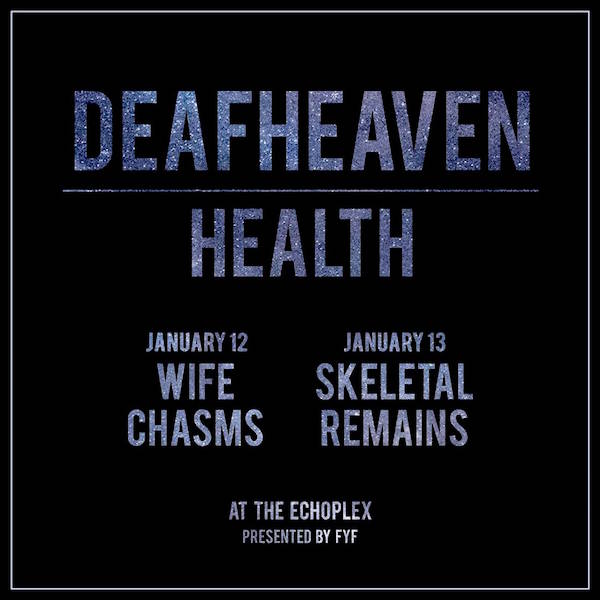 January 13th 2017, The Echoplex, Los Angeles CA: For the second night in a row, Deafheaven performed in front of a sold-out crowd at the famed Echoplex venue in Los Angeles near Echo Park. Los Angeles is a well-known mecca for bands of all musical styles vying to make their mark on the music world, so it’s always a treat when you get a trio of very diverse yet equally talented bands on the same bill. The demographic among audience goers was just as diverse, ranging from your long-haired, denim vested thrashers to your more contemporary night club attendees, making for quite the interesting mashup that ultimately resulted in a jam-packed Friday night show that promised to deliver.

Entering the stage amid a cloud of thick fog and whammy-barred pinch harmonics was Whittier, California death metal/thrash metallers Skeletal Remains, starting the night off right away with that old-school death metal influenced sound that’s reminiscent of bands like the legendary Death and early Gorguts. A relatively new band that emerged at the tail end of the recent wave of thrash metal revival bands—such as Havok, Warbringer, Vektor, Bonded by Blood, Exmortus, Witchaven,etc.—Skeletal Remains are proving in glorious fashion that this old-school sound still has relevance among the current metal scene and demonstrated that fact with a superb display of technical skill and slam riffage. Guitarist and vocalist Chris Monroy put on a great performance as frontman, playing some solid rhythm guitar while doing some death growls that were near identical to ‘Human’ era Chuck Shuldiner. All throughout their set the crowd was head-banging, starting moshpits. and raising their hands to mimic to blistering and technical solos performed by lead guitar Adrian Obregon. On a personal note, I thought it was really cool to see that bassist Adrius Marquez was rocking the same Gallien-Kruger bass head as I do, and to great effect as well. Tonight marked the band’s second performance of the year and after a very successful 2016 which included a summer tour and even a handful of shows in Japan, Skeletal Remains are definitely gaining some traction that will help lead them to an even more successful 2017. After a half hour of heavy death metal riffage, the band ended their set to unanimous applause from the crowd.

Now that the crowd was amped-up after such a high adrenaline set, Los Angeles experimental/electronic noise rock trio Health took to stage and definitely brought something much different to the table than openers Skeletal Remains. I wasn’t quite sure what to expect with the band since I’d only ever heard of them from their remix of Crystal Castle’s ‘Crimewave’ that they did way back in ’07, as well as their contributions to the soundtrack of ‘Max Payne 3’. Needless to say, I wasn’t prepared for them and while I admittedly am not a fan of electronic music all too much, they definitely put on an impressive show that even I, as well as the other non-familiar folks in attendance, could appreciate. All throughout their energetic and passion-filled set was an intricate light show which ebbed and flowed with the pulse of the music, following the sampled drum work by drummer Benjamin Miller who pounded his way through each song. To me, the real heart and soul of the band’s live presence was bassist and effects manipulator John Famiglietti, whose passion was on full display the entire night. Head-banging and dancing to and fro across the whole stage, he truly brought to life the music’s very electronic, vibrant, almost industrial sound. Vocalist/guitarist Jake Duzsik’s synthesized vocal melodies were simple, atonal, and the perfect final layer to add on top of the already colorfully rich sonic landscape they were making. Overall, the reaction from the crowd was mixed, with some dancing along to the music while others simply observed, but I think it’s safe to say their unique sound and energetic performance was well-received.

As Health’s set ended, certain groups of people flocked to the bar or merchandise booth while the majority in attendance scoped out the best possible vantage point to see the band they came for: Deafheaven. I’ve seen them twice before but always as a support act and never longer that 30 minutes, so finally getting to see them headline and play for an extended amount of time was fulfilling. As soon as the lights dimmed and the intro backing track began playing, I immediately noticed that filling in on bass for tonight was Mike Sullivan of Russian Circles, which I thought was truly awesome. In full force, the band dove right into their first song of the night, ‘Brought to the Water’ off of their latest album ‘New Bermuda’. Frontman George Clark had such a commanding and charismatic presence the entire night, often times reminding me of an orchestral conductor because of his trademark hand gestures he does throughout songs. The crowd response was absolutely ridiculous. Another instance of note was the fact that Deafheaven played a few songs from their entire discography, even all the way back to their 2010 untitled demo (they played ‘Daedalus’, which was founding members George Clark and guitarist Kerry McCoy’s first song written). Multiple fans even managed to crowd surf their way onto the stage and shout a line or two of lyrics with Clarke before diving or flipping back into the audience, which is always an awesome to witness. The connection formed between fan and artist was strong tonight, and I truly felt it to be a privilege to say I was a part of this experience. Not many bands can play an extreme form of music such as black metal and make it be something equal parts beautiful and haunting, with the ability to reach out and form an emotional connection with its listener. Deafheaven is one of those few bands with that capability, and I for one am eager to see how far this band can go.

Major props to FYF Presents for throwing yet another amazing show at the Echoplex in Los Angeles. All in all, these three bands put on very different yet undoubtedly fantastic individual performances that as a whole, culminated into a amazing night of high musical quality. Deafheaven are slated to head out on tour with This Will Destroy You and Emma Ruth Rundle starting February 23rd in San Francisco, so here’s your chance to get the Deafheaven headlining experience.