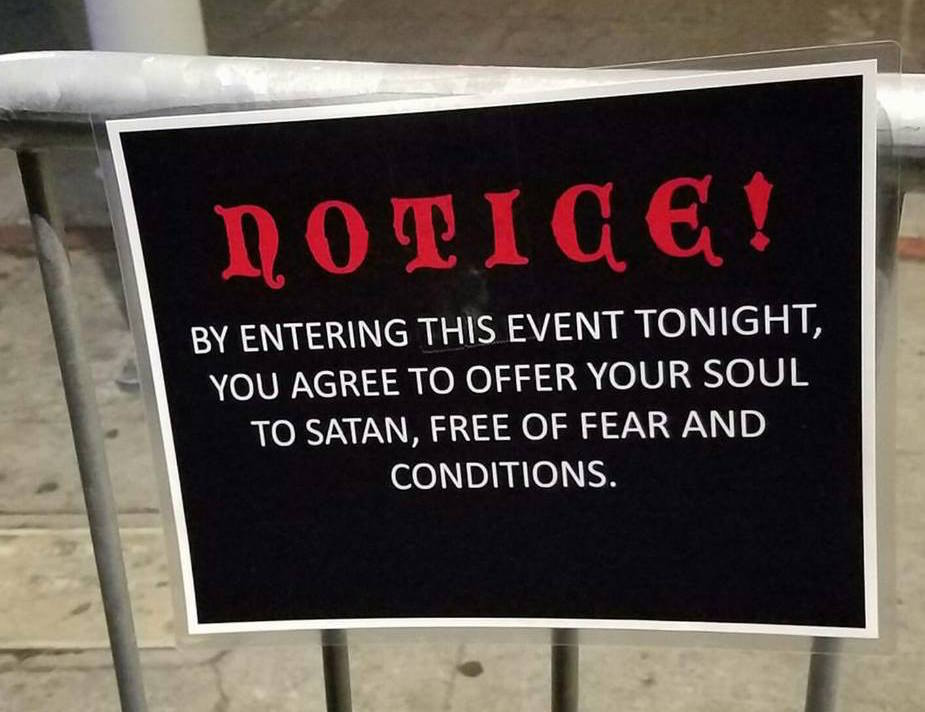 January 14th 2017, Union, Los Angeles CA: As I walked up and took my place in line outside with the few other attendees who decided to show up just as early, I noticed quite the juxtaposition: two Christian churches — one Presbyterian and the other Orthodox — which just so happened to be situated across the street from what was advertised to be the single largest Satanic public event in history, hosted by the famous industrial night club, Das Bunker.

The event was rallied together by the Los Angeles chapter of the Satanic Temple, a recently formed religious organization whose mission is to “encourage benevolence and empathy among all people, reject tyrannical authority, [and] advocate practical common sense and justice…” The event not only served as a night of “unholy” entertainment but also as a fundraiser for causes the organization advocates for, such as women’s reproductive rights, equal representation in the public sector, and exposing pseudo-scientific practitioners in the mental health field.

The event was open to the public for either the price of $15 for general admission or $66.60 for VIP, although signs that were posted outside notified everyone that admission would also require you to submit your soul to Satan, “free of fear and conditions”. While it seems like just a harmless tactic, it also served to deter a superstitious person of the wrong kind from entering, since there were threats of protesters boycotting the mass, though no such activity occurred.

Inside, the main bar room contained two merchandise tables which sold both Satanic Temple apparel as well as merchandise from the bands slated to perform later on in the night. Also included was a brightly colored black-light sculpture made by artist Christopher Andres which guests could take photos of and with, much like the one currently residing in the Satanic Temple headquarters in Salem, Massachusetts (though not nearly as big or heavy). Guests who wanted something more permanent could actually receive a tattoo in the Circle Bar area ,though it was on first-come-first-serve basis. 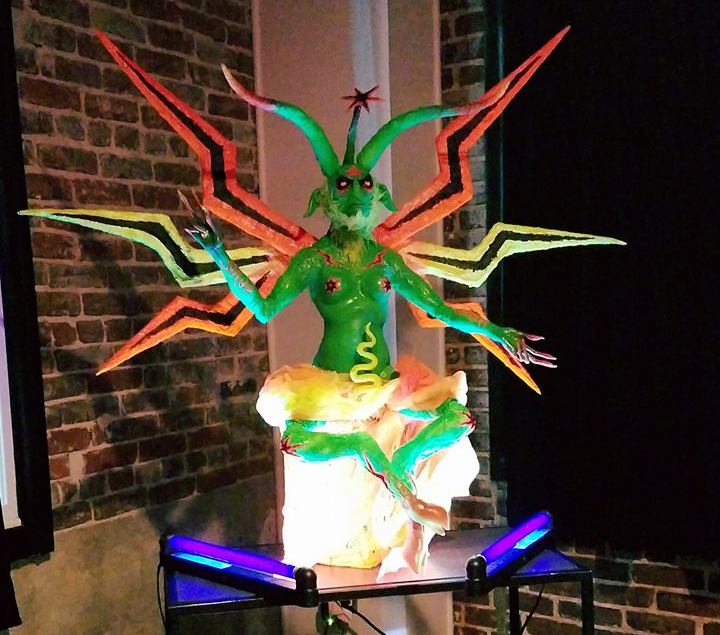 Starting the night off with a stand-up routine was comedian and first openly Satanic politician in United States history to run for California state senate (and actually receiving 13% of his districts vote), Steve Hill. Hill’s material touched on topics such as being a black Satanist, the taboo nature of the word “atheist”, and coming out to family and friends about his Satanism, all which was well-received by the crowd. Before ending his set and making way for the next act, Steve Hill wished everyone a good night and spoke the expression of the night: Ave Satanas (Latin for “hail Satan”), an expression in which performers and attendees would call-and-respond to all throughout the event.

Providing us all with a detailed and humorous 40-minute lecture on the documented history of (believe it or not) demonic cat possession was Los Angeles native Dr. Paul Koudounaris, who is also an author and noted photographer who reached a certain level of fame within the field of macabre art and art history. At this point, the club was packed with all kinds of people, some dressed more eccentrically and others as in ordinary everyday casual clothing, illustrating that there is no single defining attribute to the modern day Satanist.

It was at this point after Dr. Koudonaris’s lecture that the live performances began, starting with Lumerians, a self-described “doom jazz” band from Oakland, CA. Performing solely under a red light reflected hypnotically off their sequin-covered ropes which hid their identities completely, Lumerians put on a trance-inducing, psychedelic set with beautiful melodies and infectious grooves which often reminded me at times of bands like Ghost, Nine Inch Nails, and Sunn O))). Ali Kellog, the chapter head of Satanic Temple Los Angeles chapter, even made an appearance on stage and lent her vocal talents to one song.

The first ritual of the night was the Destruction Ritual, which brought onstage six participants who were chosen beforehand to bring forth an object which held some form of power over them — and destroy it with a hammer, mallet, or crowbar, releasing them of the control it had over them. The attendees were able to participate not only as viewers but as a collective by chanting a specific line from the ritual: I do not belong to these things, these things belong to me. Throughout the ritual, one-man industrial doom metal/noise artist Author and Punisher created a droning ambient soundtrack which truly brought to life the spirit of the ritual. As soon as the ritual ended, Author and Punisher put on an incredible performance using his self-engineered drone and dub machines, all of which gave him total control over the quality and texture of each sound produced. Bearing witness to this unique symbiosis between man and his creation was truly mesmerizing.

The end of the performance marked the second ritual to be conducted tonight, but this time, 11 Satanic Temple chapter heads from throughout the country joined the stage to participate in the Invocation Ritual. This ritual consisted of each chapter head stating their intent behind the movement, illuminating the core values of the Satanic Temple, and affirming that the roots of the current Satanic Revolution happening in this country is strong. Participants and attendees shouted “Ave Satanas, Hail Satan!” in unison and with conviction until the ritual was over.

A truly befitting band to close the musical portion of the event, industrial metal band 3Teeth breathed a newfound energy into the crowd, an impressive feat considering the event was now running into the early AM hours by this point. Lockstep grooves, heavily distorted riffs, ominous synths, and a transgressive performance from enigmatic/charismatic frontman Alex Mincolla contributed to an absolutely electrifying set. There wasn’t a single moment in which the crowd wasn’t either head-banging, dancing, mosh-pitting, or screaming the lyrics along with the band.

Concluding what had already been one-of-a-kind event was the Bloodletting Ritual, which was performed by seven women from the collaborative ritualistic art project Coven of Ashes. Meant to physically represent the Satanic Temple’s third tenet — one’s body is inviolable, subject to one’s will alone — the women performed a “bloodletting” (flesh pull, flesh hook suspension, and free bleeding via a hook attached to their mouth, throat, and body), asserting control over their own body autonomy, symbolically illustrating the need for women in the US to be given back control over their own bodies. With assistance from Matthew Setzer and Ali Kellog, artist William Morrison provided the live background music for the group, which was expressed by hitting giant steel objects to create a sonic texture fitting to the ritual going on in the middle of the venue for all the audience members to see.

The Satanic Temple and Das Bunker put together a truly memorable event that will be remembered (in)famously for its originality, creativity, and controversial nature. For the average person this event may seem way too obscure to even attempt to comprehend, let alone want to experience, but for the hundreds in attendance who share the same egalitarian views of The Satanic Temple, this meant everything. Satanism has never been able to put forth an event of this magnitude for a multitude of reasons, but for the first time in history we are seeing not only Satanists out in the open, but together as a collective. And these aren’t your stereotypical Satanists. They fight for equal rights among all people, regardless of religion or sexual orientation, and are actively fighting for it with great success. All in all, this first official Satanic Mass was a hell of a good time and I for one look forward to the next one.