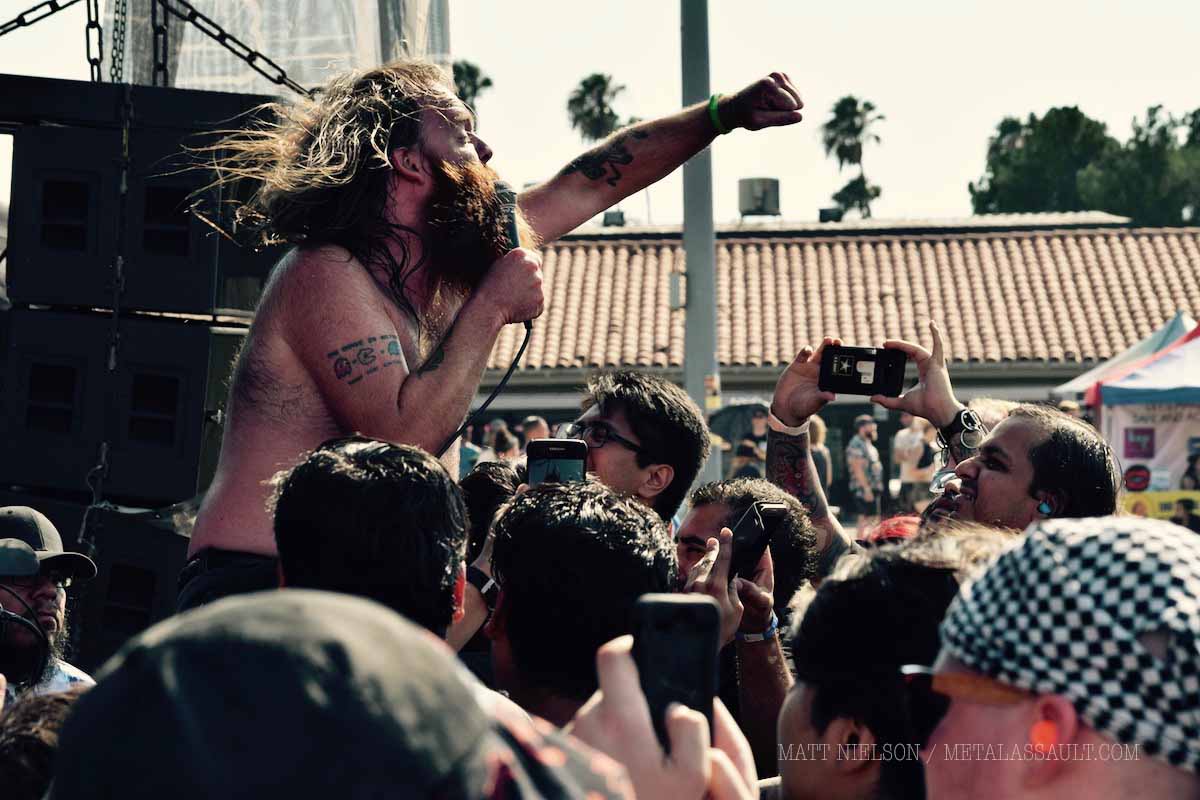 August 6th 2017, Fairplex, Pomona CA: When the lineup for the 23rd annual Warped Tour was announced earlier this year, it caught many by surprise, those of the hard rock and heavy metal ilk in particular. That’s right, the largest and longest-running touring music festival in North America decided to go heavier than usual for its 2017 lineup, featuring several bands that would easily fit on a metal festival. So, for the first time in 6 years, we ventured out to the Pomona Fairplex to attend the final show of this year’s 7-week, 41-date Warped Tour.

After paying the $10 for parking, you had to stand in a long line and walk a distance to get to the entrance, whereupon you’d hear loudspeaker instructions for the most painfully obvious things in the kind of morose voice that would make you feel like you were entering a concentration camp. Once you got past the security checkpoint, hooray, you’d get to stand in another long line to purchase the schedule of bands printed out in small font on plain paper, for $2. But just when you’re hating life, questioning whether you’re out of place or too old for this, the music takes over and everything else is forgiven and forgotten.

82 bands were spread across 8 stages, and starting things off on what would be our go-to stage throughout the day, the Hard Rock stage, were New York hardcore punk legends Sick Of It All, playing a 30-minute set that began at 12:05. Some ticket holders might have been disappointed that this band played so early, but Warped Tour regulars would have probably expected the festival to put a big name on early, and Sick Of It All was that name on this occasion. They sure lived up to their reputation with a righteous set, and we could already sense that this was the best start to what could be a great day of good music.

Over on the Mutant South stage, Minneapolis modern prog/deathcore group After The Burial were giving it their all. This is a band never afraid to take chances and tour with bands of varying styles and sub-genres, but it needs to be said, as a compliment, that they found the right demographic to perform in front of on this tour, not only giving their own fans a valid reason to attend this event, but also making plenty of new fans with their set. Contrary to their latest album title, and the kind of effort they had to put in for Summer Slaughter 2016 playing to fans of Cannibal Corpse, Nile and Suffocation, After The Burial did not have to dig too deep to please the Pomona Warped Tour crowd.

The Ernie Ball stage was the smallest of the lot, and was basically an open truck, but this is where bands really had to do something out of the box to attract the attention of people walking by and heading to other stages. Doll Skin, an all-female band from Phoenix, Arizona, did just that with an entertaining, engaging, high-energy exhibition of punk-infused rock n’ roll. Having already won quite a few accolades in their short career since their 2013 inception, Doll Skin proved that they’re the real deal. 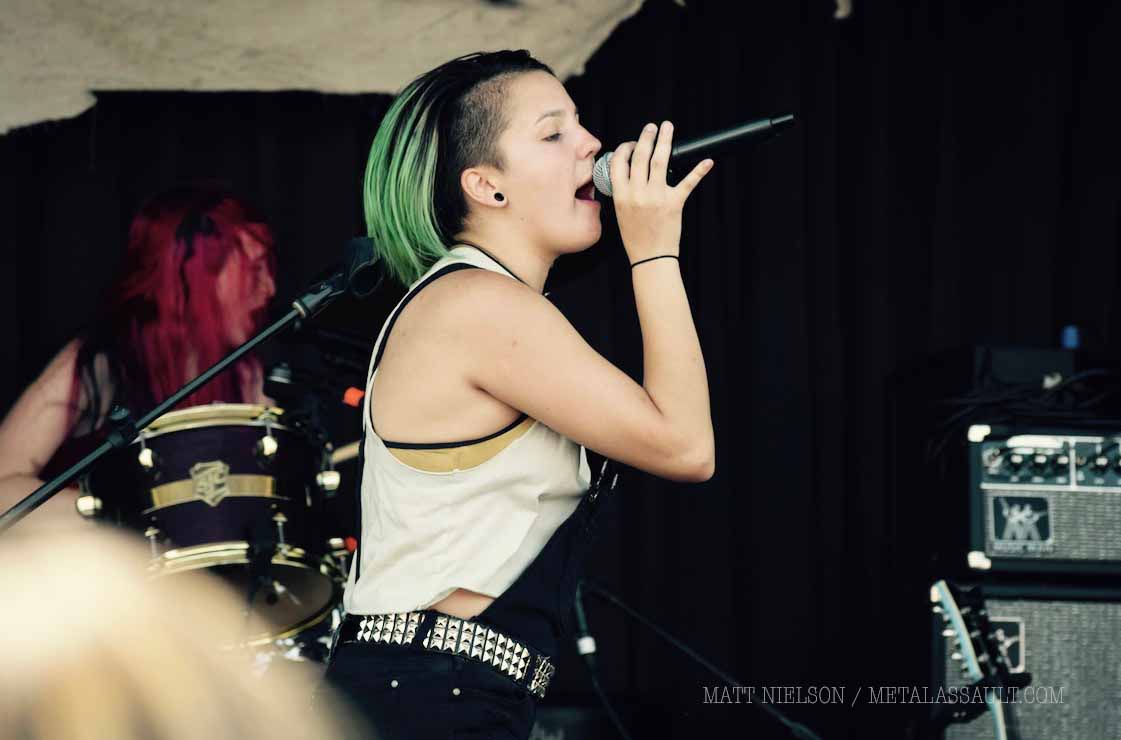 Back on the Hard Rock stage, another all-female punk rock band Bad Cop / Bad Cop from California, was keeping the crowd entertained with an energetic set of catchy tunes filled with strong three-part vocal harmonies. This band was as much about the attitude as it was about the music, and Bad Cop / Bad Cop warmed this stage perfectly for the big guns to follow.

It was rather interesting to come to the realization that the three most metal bands on this Warped Tour lineup all hail from Richmond, Virginia, and the first of them on the schedule was crossover thrash quintet Municipal Waste, playing on the Hard Rock stage at 1:45, and by that time the Fairplex was completely packed and abuzz with excitement. Their fast-paced tunes and anti-Trump slogans sent the crowd in a frenzy and the circle pit was rolling full tilt during their set, as they belted out one song after another with furious intensity while keeping the humor aspect intact. ‘I Want to Kill The President’, ‘You’re Cut Off’ and the anthemic ‘Born to Party’ were the highlights, but there was not a single dull moment to be found in the 13-song, 25-minute set. In all honesty, if Municipal Waste wasn’t on this lineup, we might not have attended this event at all, and they absolutely did not disappoint. Often the most punk band on a metal lineup, this time it was the other way round for Municipal Waste, but they still won the crowd over and made an indelible impact. 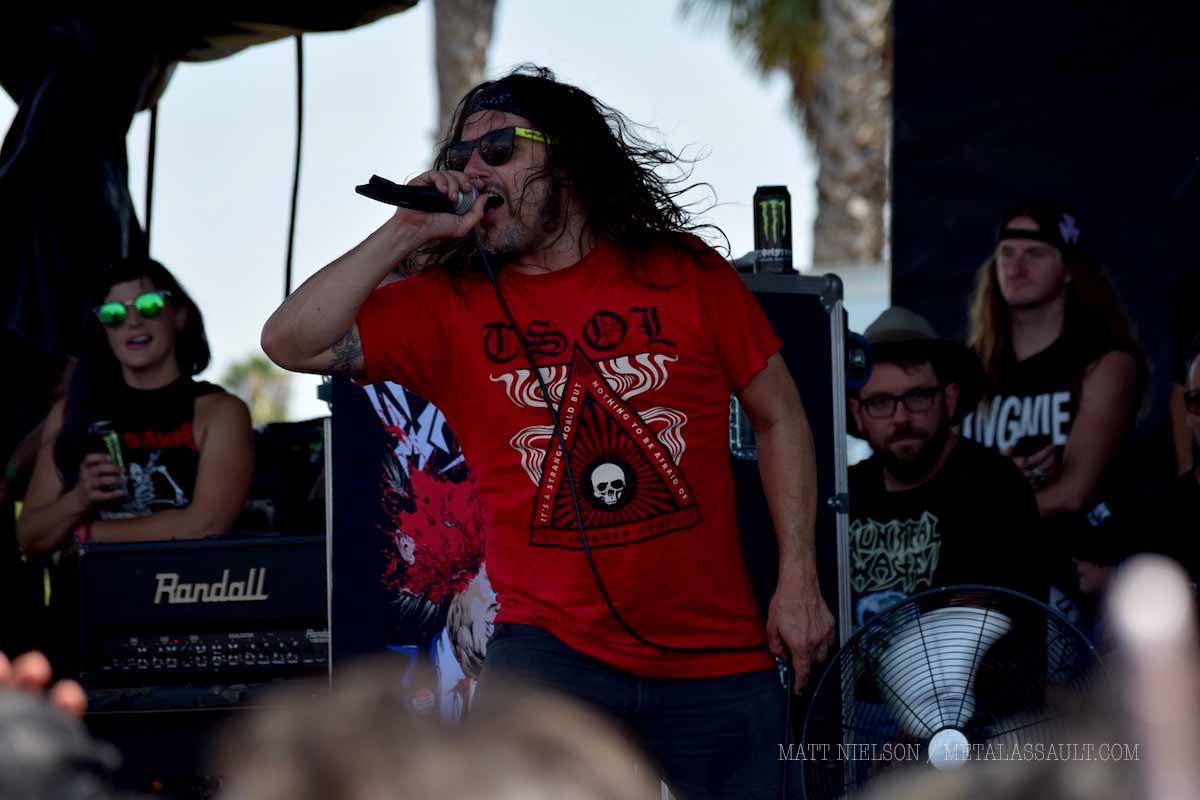 It wouldn’t be a festival if there wasn’t at least one instance of two great bands playing at the same time, and sure enough, East Coast metallic hardcore stalwarts Hatebreed were slotted in almost the exact same time as Municipal Waste, over on the Mutant North stage. “Almost” is the key word here, because after the Waste set we were able to sprint across in time to catch the last two songs of Hatebreed, and if the strong ending with ‘Destroy Everything’ and ‘I Will Be Heard’ is anything to go by, they certainly delivered the goods, as they so unwaveringly do every time they step on a stage. Whatever your opinion is of Hatebreed’s music itself, you simply cannot find anything wrong with Hatebreed the live band.