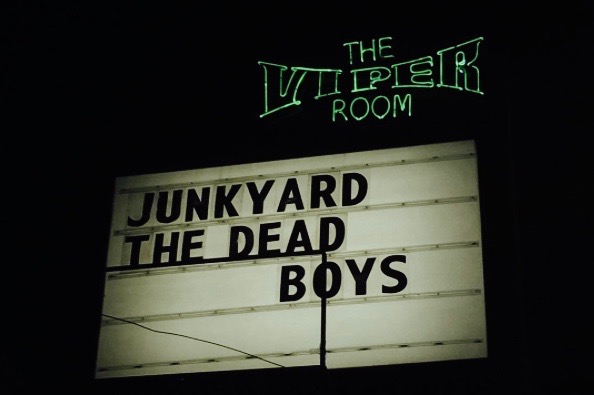 July 15th 2017, The Viper Room, West Hollywood CA:  While some of rock n’ roll and punk rock history remains just that, much of it has continued to brand its way into modern-day reality in some very valid semblance of what it once was, and when joined by a few fresh faces to round out a new creation of an old way of life, you can expect to see one hell of a great show. On Saturday July 15th 2017, I attended a sold-out Viper Room show with co-headliners Junkyard and Cheetah Chrome’s The Dead Boys. While these two very compatible bands brought their best to this show, living in Los Angeles brings quite a few chances to catch a Junkyard show, so the favored catch on this evening seemed to lie in the hands of Cheetah Chrome, Johnny Blitz, and his very lively Dead Boys although the crowd attended and responded well to both. Before I create thunder and lighting over the obvious debate here and topic at hand on who is singing in place of Stiv Bators and how can this still be The Dead Boys, let’s remember that it’s forty years later and Cheetah Chrome who seems to be in great shape has forty more years of guitar playing experience that was worth the ticket price alone.

Junkyard, who celebrates thirty years of their existence of debauchery, played a powerful show as usual on this occasion, with a good mix of the classics, plus with their newest 2017 album release ‘High Water’ under their belt, they are as strong as ever. Favorites still remain to be ‘Misery Loves Company’ and ‘W.F.L.W.F. (We Fuck Like We Fight)’, and their southern rock stylings with a touch of punk influence done in a very straightforward bold way solidify the deal. David Roach completes the mold as well with his gritty vocals and witty lyrics. It still surprises me when LA folk do not know of this band and they really are a steady staple here that continues to rock no matter what constantly changing era and environment tries to hold them back or push them away. They certainly proved their worth at this show and it set the energy levels high for what was to come.

Taking the stage last around 11:45 on this special anniversary themed night was short lived legendary punk rock band The Dead Boys. What I find interesting is that they definitely get a mixed aged crowd despite their late seventies origin and at least half of those in attendance were either in diapers or not even in the womb yet when the band was in its heyday of existence the first time around. The other part of history that fascinates me as well is that if you go and YouTube some CBGB night with Stiv singing for the Dead Boys or invent a time machine, you will see some sweaty boys playing wildly exciting and catchy tunes a bit on the sloppy side. Forty years later, I realize just how much actual guitar work goes into the making of this band, which in turn pushes the boundaries between punk and rock n’ roll more in favor of rock n’ roll. Yes, there is that garage rock term, but to me that is an undermining notion when it is in fact on a higher level of skill. Still, the punk attitude remains, and while this may have been a slightly calmer show along the band’s journey, the “you break it you buy it” clause still seems to hold a grudge in their lives in terms of venue equipment.

It seems the next generation of early eighties punk bands that were influenced by The Dead Boys did not quite grasp the more complex guitar styling due to the reckless antics played out to the max in a small hot club in NYC back in the day, and perhaps this is partly accountable for the generation of power chord madness that ensued. On to the show in 2017, the modern-day singer Jake Hout had all the right moves with pleasing vocals without getting into a mimic of Stiv, even though there was a touch of the infamous microphone chord strangling happening in the midst of it all. The greatest moments were the realization that they were keeping to the essence of the past shows to in some ways recreate history by starting with the ever popular ‘Sonic Reducer’, and shortly after, diving into ‘All This And More’, which if that didn’t bring tears to your eyes over the memories of Stiv Bators, then listening to the heartfelt and somber tune ‘Ain’t It Fun’ just might. The bass still cranked and the drums punched out the room while the rhythm guitar enhanced the fight and balanced the energetic vibe. The packed crowd was intriguingly entertaining to watch as the diehard fans with their happy nostalgic faces lit up the room and they connected with the new singer as they may have with Stiv back in the day if that opportunity ever had the chance to present itself. Jake Hout has extremely tough shoes to fill here, but his charismatic nature and similar appearance to what an older Stiv might look like, along with a humble attitude backed with wildly entertaining energy, made for a great show.

If you still don’t believe in an afterlife for this band, just know that Cheetah Chrome playing guitar on stage in any band today would be well received by anyone who gave it a chance, but it was the new members who brought their own flavor into the mix that with skillful dedication recreated a very exciting and fun-loving moment amidst the self deprecation that bleeds itself out of any punk rock history.