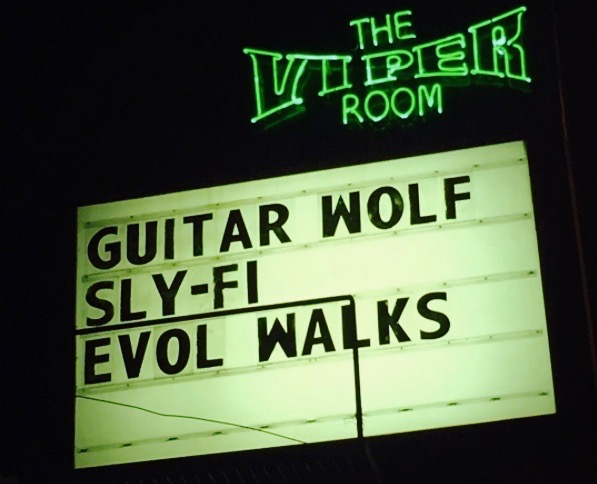 July 8th 2017, The Viper Room, West Hollywood CA: What qualifications make for an unforgettable punk n’ roll show well worth the price of admission? In this day and age one sure fire trait is attention to detail along with attitude, and if you were to throw in a little culture for good measure, the crowd might even stay for the encore. The history of punk rock in America as well as England is quite the bold and commonplace tale including The Sex Pistols, The Ramones, The Stooges, and Black Flag to name a few, but what may not be so familiar is how it came about and what influences mattered in other cultures such as Japan for example. On Saturday July 8th 2017 at The Viper Room, I attended a very special show featuring Japanese garage rock n’ punk trio Guitar Wolf as the headliner with support acts Isaac Rother and The Phantoms, Sly-Fi, and Evol Walks.

The show started promptly, shortly after 8:30 and Evol Walks commandeered the stage for a fun birthday show for lead singer Leah Martin-Brown who comes to us from Australia with her powerful brand of rock n’ roll. Every time I see this band, there is a new member that blows my mind with their inevitable talent, and on this occasion that was the newest member, Tosha the drummer. She is a hard hitter and very creative, and ended the set in a phenomenal way with the second drum solo of the evening that sent sticks flying and brains melting. The whole team is always giving a professional performance and the skill meets the talent head to head which says it all. Leah has a powerful and pitch perfect voice, but the highlight for me is that it is never taken too far over the top, which as nice as a power trip excursion can be, sometimes less is more. They are working towards putting out a new EP, and although I don’t know the title there was definitely a favorite tune for me of a more ballad style towards the end that just reeked of beautiful tones. The guitar solos were crisp and clear, intricately laid out, and possessed a validity that spoke well for them. Overall, their charismatic nature can win over the hearts of any crowd, and they proved a good opener for the night.

Next was the odd ball out with punky as well as poppy rock trio Sly-Fi who just seemed to belong to another show as they were the most dated sounding of the bunch that didn’t have much in the way of resonance for the current year at hand. While the music was tasteful and not unpleasant with a good harmonizing duality on the vocals, it was a rough start in the land of guitar tonality and while the mix of punk and rock should have been exciting, it was fluctuating between one and the other too much that it felt to me they should just pick one genre and excel at that. It got steadily better as the set progressed, but there were also two moments that stood out way more than the songs for me. The first was when the singer asked to get more light shined on him, and while if he were in the dark the request might seem totally valid in the context it was just plain odd, and then after one song with a few snippets of flashing lights he again made a statement this time saying that the flashing lights was too ’80s for him.

Moving on to a surprise pleasantry Isaac Rother and The Phantoms brought some really entertaining dance moves and duel vocals between the male and female singer. Miss Tatiana who was a charming and shockingly talented vocalist stole the show, but her black cape wearing counterpart vocalist and guitarist was also a treasure to watch in all his more subtle glory. The theme was horror in rockabilly and they strayed over to the land of surf rock just enough to add a smile to anyone’s face with their brand of happy and cute horror topics. It got more and more witty by the end in all its themes, and I had so much fun watching them I may have coined the term Spookabilly in my head to describe them better. The wild dance moves mixed with the cool bass jams, shrill vocals, and diverse guitar highlighted the set and as an local LA group they shall be put on my radar for future encounters.

As temperatures were rising inside the increasingly packed Viper Room, the time most were waiting for was about to begin. As the curtain opened and no one appeared on stage, the DJ kept going with the tunes as seemed to be planned by Guitar Wolf as part of the act who came out eventually in what looked like Godzilla masks over their faces. As I mentioned, it was hot and dark, but as the slaves to fashion that Guitar Wolf seemed to be, the leather jackets and sunglasses that were on underneath the masks stayed on the whole set, at least for the singer. The image is important here and it works well for them as it did for The Ramones who are a clear main influence of theirs among others of the era. What stands out about Guitar Wolf and puts them out of the standard J-rock world is this punk influence and heavy distortion with feedback technique with the broken English shriek style lyrics and vocals that really make their lasting mark on the intrigued audience. Guitar wolf has all the right moves, much to a similar degree as other known guitarists such as Zakk Wylde with the over-the-back and over-the-head guitar play. There were other bonus moves such as the swing and pluck, the uniform jumping, and the wild moment when they brought Isaac on stage from the previous band to take over on guitar while the singer crowd surfed, and then the bass player followed suit with his replacement fill in for the crowd surf championship. Obviously at this point you understand that they put on a highly energetic and entertaining show that even included an encore, totaling the set time to over an hour. With the death of the original bass wolf in 2005, the band took a sharp hit, but have since recovered with a vengeance, and with their jet clothing line, jet rock, and horror film appearances, these dudes are not noted for being shy.

Guitar Wolf has been around since the late ’80s and just as their influences made them, they have influenced others in the same way. After the end of the last song I believe before the encore the singer pulls out a comb from his pocket, combs his hair, tosses the comb, and walks off stage. Meanwhile, the aggressive drummer has been whacking away all night and not a strand of hair on his head has moved. The conclusion drawn here must be that they have great hair product, but it has yet to be confirmed. As they went through a variety of old and new tunes it was all par for the course, and I for one was happy to see them for the first time and fear what may be a long coming till they swing back this way. The tour continues though, so get it while it’s hot because these guys can totally teach a new dog old tricks and vice versa.