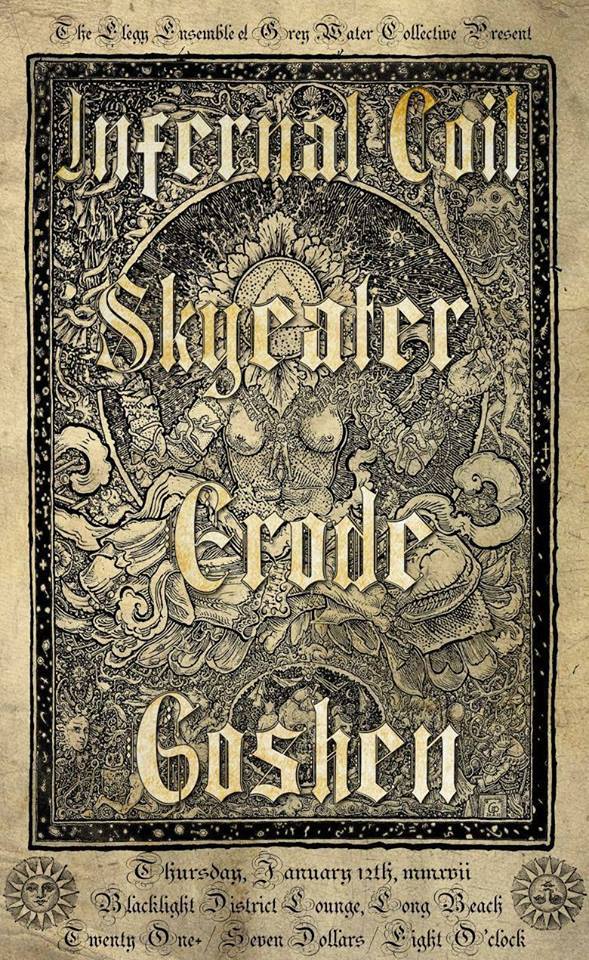 January 12th 2017, Black Light District Lounge, Long Beach CA: The rainy and bleak weather outside seemed almost indicative of what the rest of the night promised to bring in, yet another great line-up prepared by the booking and promoting staff at The Elegy Ensemble, hosted by Black Light District Lounge in the culturally vibrant city of Long Beach, CA. With new and recurring bands coming together to bring their own unique sound of extreme music, tonight promised to deliver. Local up-and-coming bands Goshen and Erode were slated to start the night off before they make way for co-headliners Skyeater, and last but not least Infernal Coil, hailing all the way from Boise, Idaho.

Opening tonight’s show were Mira Loma natives Goshen, a new band who proved that they definitely belong to play alongside all the other great bands on this lineup. With tonight marking the band’s first ever live performance, they demonstrated that they are a force to be reckoned with, going full-blast right from the get-go with a ferocious display of noise-driven guitar riffs, blistering blast beats, thunderous bass lines, and visceral vocals. Opting to perform off stage and directly in front of audience goers, vocalist Kyle Ferguson—who also fronts the one-man noise project Misery Ritual — delivered an honest, emotionally-charged and hate-filled vocal performance that could be felt throughout the venue. Taking no break in between their songs aside from an effect-laden noise performance from guitarist Jake Eras, Goshen blasted through their set with a pure sonic assault reminiscent of the early days of Converge. This is one band you want to keep your eye out for in the future, as well as their four-track demo which is aimed to be released early this year. After such a strong opener, the bar was set high for the next act and the tone for the night was now established.

Next up was West L.A. trio Erode ,who took to the stage with a sound that was a blend of death metal, doom metal, and thrash metal. They performed a solid set that consisted of heavy, doom-inspired melodic passages by guitarist Devlin Baldwin and bassist Yuri Kondra, all while being supported by some solid pounding drumming from drummer Christopher Rodriguez, which served as the backbone of the band’s sound. All three members shared vocal duties, trading off in different sections of the songs, providing a wide variety of low death growls and screeching highs throughout. Having formed in 2015, Erode are still a somewhat new band but they have solid synergy and they make for a strong up-and-coming band with much potential for growth. With all that being said though, the overall pace and tone of the music was a stark contrast to the prior band’s set which left me with a feeling that, while they didn’t perform badly by any means, it wasn’t exactly up to par nor did it feel like I was being offered anything new in terms of the material they presented. On the other hand, it was refreshing to hear that classic metal sound mixed in with the newer more “unconventional” approach or feel of the other bands, providing a good balance.

With a backing track emanating primordial and ominous tones along with the ritualistic burning of incense, the corpse-painted members of Skyeater immediately altered the atmosphere to make it appear as if they are no longer playing in a venue but in another realm all their own. Every time I see these guys, I’m always impressed with their ability to transport me into their musical world and I’m always blown away with their consistent high-quality performances, and tonight was no exception. Skyeater’s sound can be described as black metal at its core but with trace elements of funeral doom and post-metal thrown in, creating a unique musical template that also serves as a much appreciated breath of fresh air in the often stagnant genre of black metal. The combined sound of fast tremolo-picked chords, drone-like bass lines, high-velocity drums, haunting and melancholic clean guitar passages, and the trio of harsh vocals which echoed throughout the venue, created a sonic portrait of anguish. One of the key elements that stood out to me and contributed to the overall great performance was the drum work: consistent, technical, hard hitting, and fast. Their debut album, which is slated to come out early this year, is definitely one that I am eager to get a hold of and listen to, as should everyone else.

Finally, it was time for headliners Infernal Coil to wrap up what had been an already amazing night filled with talented bands of all forms of extreme music. Admittedly, I knew nothing of the band coming into this show aside from them being a death metal outfit hailing from Boise, Idaho, but as soon as the first dissonant chord was struck, I knew these guys were the real deal. Amidst piercing feedback from the amps, the band started their set off right away with some of the most blisteringly fast and hard-hitting drumming I’ve ever heard live and in person by drummer Blight, which was also perfectly complemented by the frantic chordal playing by guitarists Folús and Glum. Playing their set completely in the dark aside from two red lights which dimly lit the stage, Infernal Coil’s live presence truly gives homage to their namesake with a sound and look that feels like they are invoking something sinister and ominous from the lowest depths of hell. The members themselves had their faces and arms clad in black face paint which resembled smeared or burnt coal than corpse paint, indicative of the fact that they are aiming to tie everything about them as artists and the music they create as one collective experience, much in the same way Skyeater did, but much darker. Before I had a chance to truly take in the entire experience, the set was over, much to the dismay of all the people in attendance who wanted more, a testament to the fact that this band was the perfect choice to close off an already impressive night. The band has one release so far under their belt, last year’s ‘Burning Prayer of Infinite Hatred’ EP, which is available online via Bandcamp. If it isn’t already in your music collection, it needs to be included.

Overall, tonight was yet another fantastic night brought together by the combined efforts of the guys in The Elegy Ensemble, the owners of Black Light District Lounge, the bands, and the fans as well for supporting local and rising bands. Should any of these bands be on a lineup for a show that is nearby where you live, take the time to check them out.