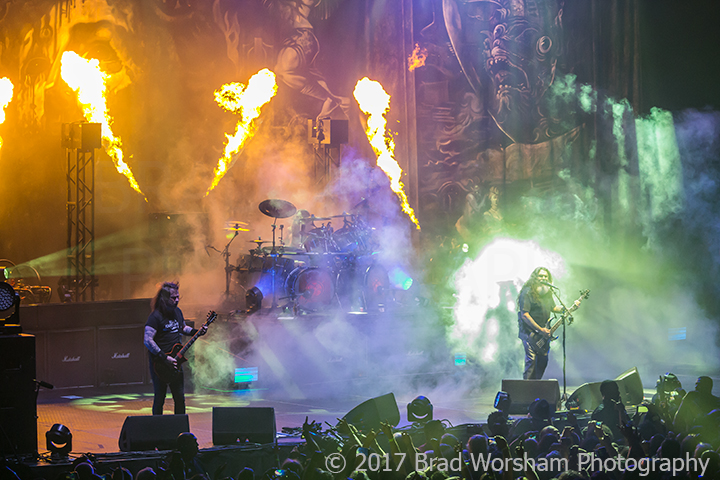 August 5th 2017, The Forum, Los Angeles CA: As a part of all praise and popularity stemmed from creatively bold risk taking in music, there is also the notion that it comes with a heavy price due to its naysayers. Is it worth the price? Absolutely, because it means that pure hearted passionate metalheads can have their cake and eat it too, which includes witnessing live performances by such controversial bands such as Slayer, Lamb Of God and Behemoth. On Saturday August 5th, I was able to do just that at the great indoor arena stage that is the Forum. Unlike most arena stages, the Forum does not really have bad seats as it is not too big or steep, although the floor is always prime picking. With such a compatible line up of three great heavy metal bands who enjoy singing about Satan, there was not really a dull moment to be had.

Of course as per usual, a Slayer show does not happen without a few protesters standing idiotically outside the venue with signs that more or less state that we are all going to hell if we go inside. What’s moronic here is that they simply do not understand that we go to Slayer because we enjoy hell and damnation so much that we seek it out, embrace it, and we are not afraid of the experience that presents chock full of entertaining imagery. That does not mean everyone there is satanic or even religious at all, and there is actually a beautiful artistic ideology behind the satanic imagery, and personally I find it appealing on an artistic level alone.

On to the show, precisely on schedule at 7 PM Polish blackened death metal band Behemoth lit up the stage with their opening fire ritual and satanic incantations. Of course, they opened with a song from their latest work of art ‘The Satanist’, which is a brilliant album from start to finish. Lead singer and guitarist Nergal always has his work cut out for him and always handles all complexities with great ease and dedication. As per usual, because some people who are unfamiliar with bands that come from overseas don’t bother to research them before a show, the sold out venue was only filled to half capacity for most of their set (although that’s still a sizable audience). If you are a Slayer fan and don’t like Behemoth, I don’t understand why at all because although these bands are completely different animals, they do share a common bond and relation that I feel is important to acknowledge. They also come from Europe with inspiring cultural appeal and have great style with their specially designed black warrior slight pauper style clothing that further enhances the effects of the empowering dark music. Their whole set was evil at its finest while grimly captivating, and the slight downside was that they had to only feature seven songs in their short 30-minute set. They hold a high ranking in my book regardless, as one of my favorites in the genre and they always bust ass in all their extreme brutality on stage. 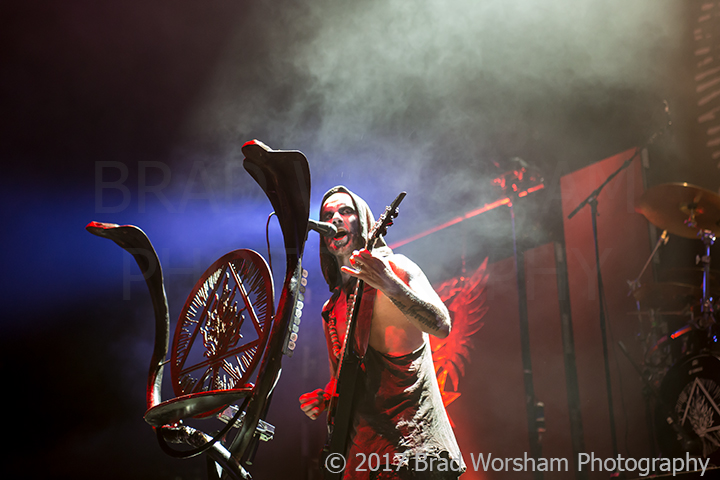 Next up with some highly niched video imagery to further enhance the performance of Richmond, Virginia’s Lamb Of God, who swooped in and captured the audience with some fantastic energy and a great set list to boot. The highlight for me was ‘Walk With Me In Hell’ but the entire set was jet fueled with a jumping Randy Blythe who is a very inspiring front man as well as a powerful lead vocalist. He spoke very much between a few songs and only gave the audience more energy to feed off of rather than put them to sleep with unnecessary banter. The best part of it all was when he told the ironic story of how the band based on name alone was banned from the venue ten years earlier, only to be accepted now along with Slayer of all bands for this tour. Both bands have their own controversies based on fired up religious nutjobs, but ironically neither one really practices any serious Satanism. Lamb Of God’s friendly catchy powerful groove-based metal absolutely rules in a live context, and the pit during their set was better than it was for Slayer in its energy level and chaotic appeal. I was expecting Lamb Of God to be the least exciting of the three bands in this lineup, but they proved me wrong because they in fact were the highlight of the evening based on energy level alone. The video imagery of dead bodies in fields and explosions etc really fit the hardcore grooves of the tunes well, and really there isn’t much left to say because it speaks for itself in success and the house was packed to the maximum. Even if you are not a fan of Lamb Of God, you would have to admit that this set was phenomenal. 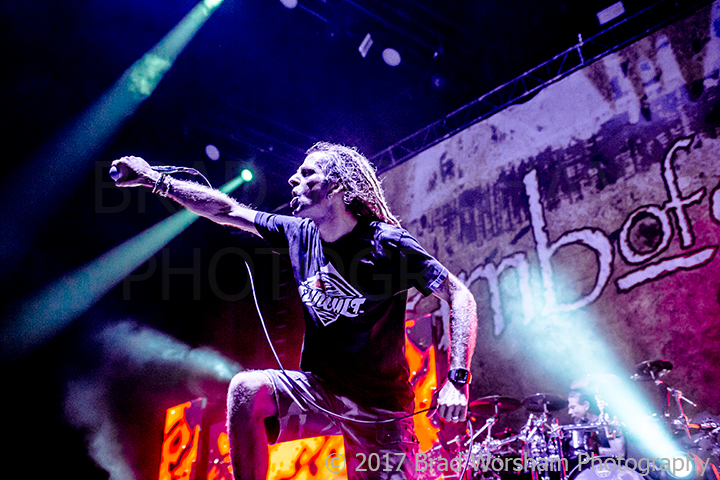 On to the main act and draw of the evening, Los Angeles’ own thrash Gods Slayer burned up the stage with their 20-song set, featuring selections from nine of their albums. Of all the times I’ve seen Slayer, this was by far the best in terms of pyrotechnics, perhaps because it just seems more intimate in an indoor setting, and flames that shoot into each other to form upside down crosses are pretty damn exciting to watch. Being up close and personal feeling the heat is also an in-the-moment feature that puts the fans in hell with the band, which as I mentioned before is exactly where they want to be. The controversy in this band these days is actually in the changed members and what that means for the music old, and new. After Jeff Hanneman passed away, Gary Holt from Exodus has been the fill-in guitarist and while he is a great guitarist in Exodus among other projects I’ve seen him in I just don’t know if he fits in Slayer. Perhaps it is simply that I notice the difference without Jeff and greatly miss his presence, which could be what throws it under the bus unintentionally. Still, the fan favorites come out strong and after Dave Lombardo is out again for the millionth time, Paul Bostaph is in for at least the second time and he might be the most energetic part of the band these days. Tom Araya is still a powerhouse on the vocals as well, and Kerry King is still Kerry King, which is a good aspect.

After seeing Lamb Of God set the bar so high, having Slayer open with the ‘Repentless’ title track was a weak start. That song is one out of four that they played from that latest album and despite it being probably the best tune on that album, which is their most underwhelming album as a whole. It shifted the mood from high to bored every time they played a song off that album, unfortunately. They usually stick to a very similar set list and of course as the years go by they add in the new tunes, but I would actually find it more appealing if they opened with ‘South Of Heaven’ or ‘Seasons In The Abyss’ to set the energy high in the beginning. Of course they throw in the treats with ‘Hell Awaits’ and ‘Bloodline’ and end with ‘Raining Blood’ and ‘Angel Of Death’, which in my opinion is the best song they ever wrote and possibly the most controversial. ‘Angel Of Death’ defines Slayer in all ways and is an absolute staple in their history that can probably never be topped. And as with all great Slayer shows, the aftermath was treacherous as I walked through a sea of plastic cups and lost or broken articles of clothing that flew off people in the pit.

For a venue that has unreasonably priced alcohol at $28.00 for a double measured shot of hard well liquor, making the task of achieving drunk level near impossible, there sure were quite a few drunken people falling into people on the floor zone. I am pretty sure some of that may have been attributed to the joints that were passed around in abundance which actually calmed the Slayer pits down a bit as well. The couples scene was also in high stays, at least from my point of view, since I basically had a soft-core porno going on in front of me with the amount of face sucking going on. Whatever floats your boat, but hey guys, Slayer is on stage and you watched five minutes of an almost two hour set filled with exciting satanic visual imagery. Needless to say I was not the only one who wanted them to get a room.

All in all, this was a great show and a sold-out show which was well deserved, considering there was direct competition from Gojira at another location which also deserves their acquired attention in the States. Go see this Slayer tour if you can, and don’t miss Behemoth because they are truly great and well deserving of this package and then some.