August 5th 2017, House Of Blues, Anaheim CA: Amidst playing a few stadium shows in North America as an opening act to Metallica, French extreme metal stalwarts Gojira are also currently out here doing a handful of headline dates of their own, with support acts Pallbearer and Oni. Gojira is a band that’s been in existence since 1996, perhaps a lot longer than many of their newer fans realize. But in the last 5 years this band has enjoyed a rapid rise in popularity, not because of a dramatic sellout move, but simply owing to two brilliant albums, ‘L’Enfant Sauvage’ (2012) and ‘Magma’ (2016). Gojira’s relationship with North America goes back at least 11 years when they first started touring here regularly, and for new fans as well as people who had seen them through the years, last Saturday’s concert at the House Of Blues Anaheim was a stunning embodiment of the dizzy heights Gojira have climbed to as a live band.

It has been said before on this website and it must be said again, the new House Of Blues at Anaheim Gardenwalk is the best place in all of LA and Orange County to see a metal show, and for anyone in doubts about attending this show on a night that had at least three other high-profile concert options, the prospect of visiting this venue would have surely helped make up their minds.

Doors opened promptly at 7:30, and at 8 o’ clock, Oni took the stage for a very lively and impressive 25-minute set. In the past two years this Canadian band has emerged as one of the go-to opening acts for tours and lineups of this nature, and for good reason, because they totally excel at getting a crowd warmed up for the main acts to follow. Led and fronted by the powerful performance and presence of vocalist Jake Oni, the band reveled on this big stage, which they always seem to do, and as the frontman rightly pointed out, for them “this never gets old”. Besides the vocalist, Oni exhibits the supreme talents of two guitarists, the rhythm section, and a xylosynth player. For this Gojira-loving crowd, Oni’s progressive metal tunes were easy to appreciate, and in addition to skillful instrumental work and a compelling combination of growling and clean lead vocals, the clean singing harmonies stood out as the most memorable aspect of Oni’s set. As this audience discovered, you just can’t go wrong with arriving early enough to catch Oni’s set. 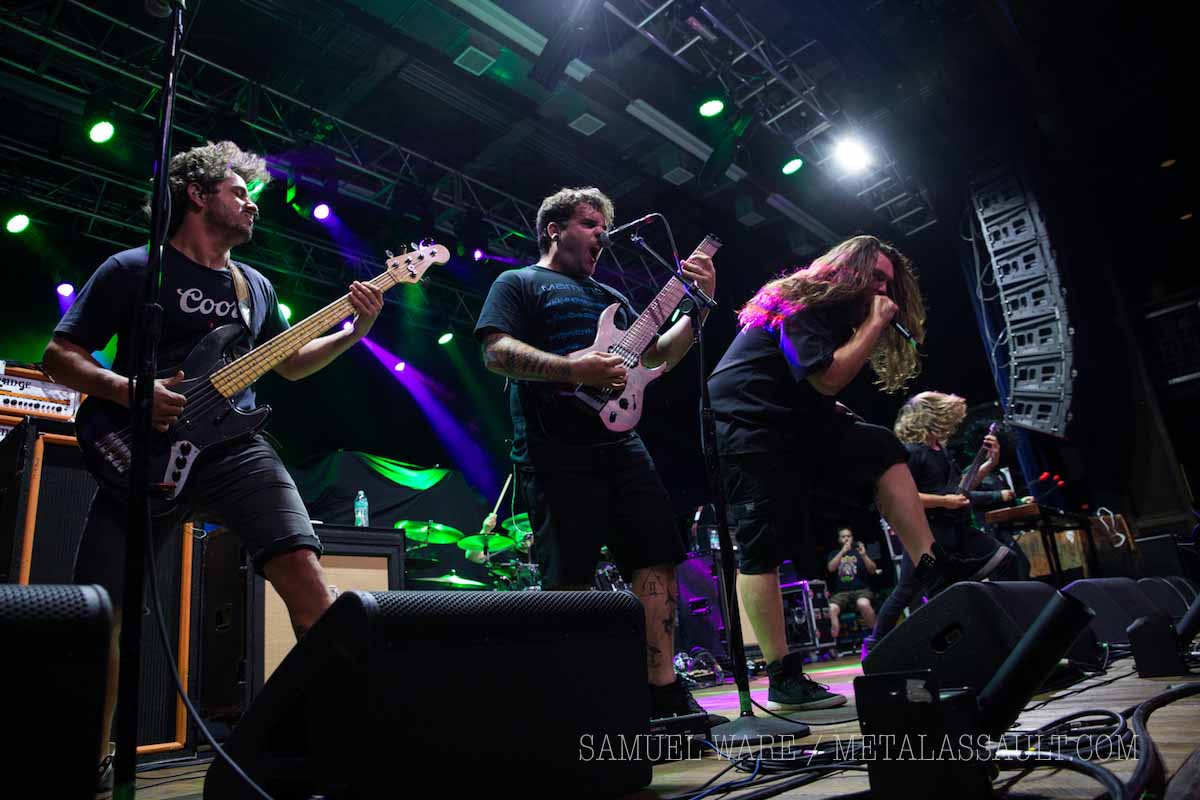 Typically, one would think that a doom band sandwiched between the likes of Oni and Gojira would not be well-received, but such is the class and finesse in what Arkansas quartet Pallbearer is able to do with their interpretation of doom, their set on this occasion held the crowd’s undivided attention and garnered a unanimously positive response. The first notable element of their performance here was the exemplary quality of the guitar tones which possessed and exuded the power to compel on their own. Add splendid lead vocal delivery and an ultra-precise rhythm section to it, and what you get is simply a top-notch band. Their 35-minute set duration on stage allowed them to play only four songs, two of which came from their 2017 release ‘Heartless’, and with very little talking between songs, they certainly created a distinct mood and vibe with their set, very much in the zone themselves and taking the audience to enter it with them. Although sonically disparate, Pallbearer were in fact the perfect fit on this bill because just like the other two bands that constitute the lineup, they too are at the peak of their powers as a live act at this moment in time. 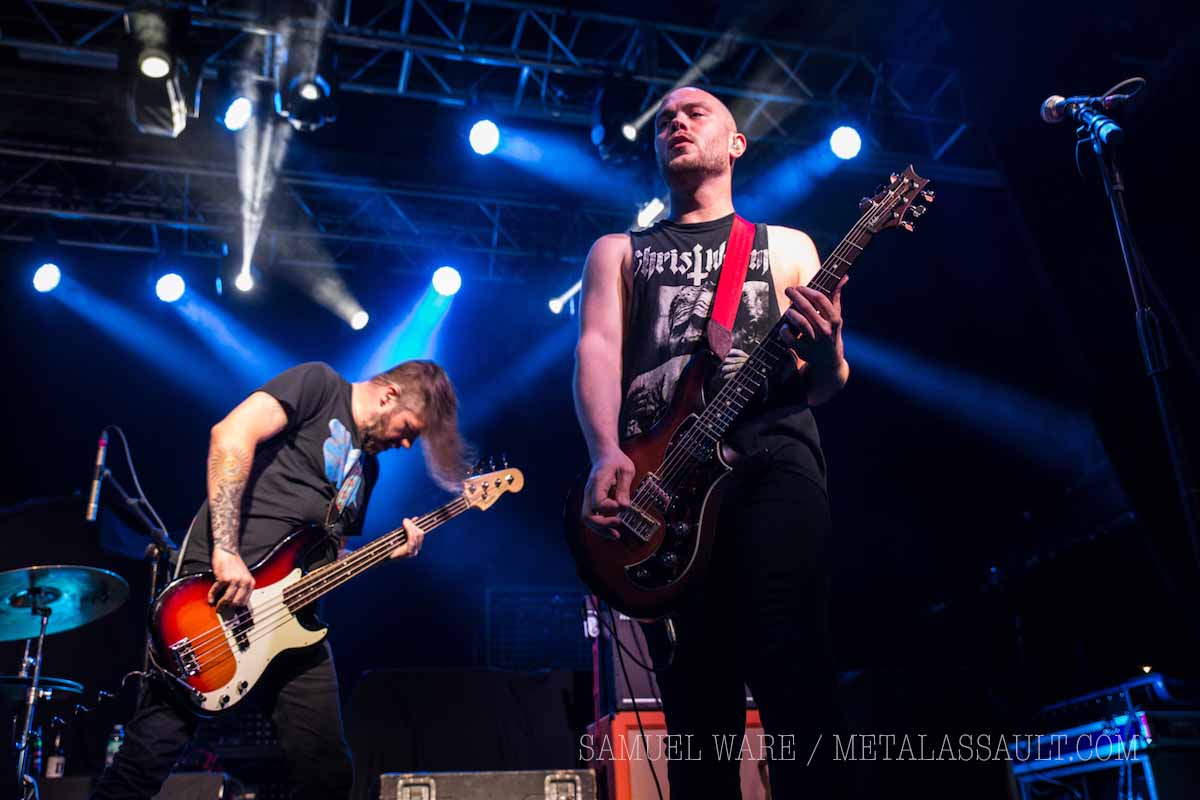 Time had flown by, thanks to two tremendously impressive opening acts. Watching the road crew setting up the stage for the headline act was thrilling in itself, and one could sense the onset of something special when the house lights would eventually go black. As it turned out ,this intuition was not wrong whatsoever. Gojira hit the stage at 10 PM, and did so with all guns blazing. That phrase is used often and perhaps overused, but it is applicable to this Gojira set more appropriately than anywhere else. Anyone who had not seen a Gojira headline show in the past few years was in for a mighty pleasant shock. Their sheer musicianship is what drew people towards them in the first place many years ago, and this quality still stands strong as the core and foundation of their existence. But they have incorporated several new dimensions to their live performance, from giant smoke machine blasts to multi-layered lighting patterns and mind-numbing strobes. A Gojira headline show in 2017 is not a mere performance, it is a concert experience in the truest sense of the term, and it is mind-boggling to think about the massive leaps this band has made in their evolution since they began.

Gojira’s latest album ‘Magma’ is without doubt a masterpiece, and the band rightly played as many as five tracks from it in this full 90-minute headline set. The song ‘Silvera’ in particular deserves special mention, for it really is one of the most perfect heavy metal songs written in recent times. Besides showcasing themselves as the brilliant musicians they are, the four members of Gojira have also clearly upped their game in terms of stage presence and crowd interaction, and are now a band that belongs nowhere else but the big stage. Vocalist/guitarist Joe Duplantier has become a complete natural at addressing the crowd, and at one point he reminded everyone that the band actually started in 1996, are not a “baby band” just because people know only one album of theirs, and are older now than they were in ’96 but are still very much a metal band. This was a very important and significant statement from him and the band, proving that unlike many of their contemporaries who are suddenly too cool to call themselves metal, Gojira has no desire to ditch their past or forget their roots, and their mindset has not changed with heightened popularity.

And sure enough, Gojira played quite a few of their older songs, as their horde of fans gathered here collectively lost their minds. ‘The Heaviest Matter of the Universe’, ‘Flying Whales’ and ‘Backbone’ sent the crowd into delirium early on, while ‘Oroborus’, ‘Toxic Garbage Island’ and ‘Vacuity’ off of the 2008 album ‘The Way of All Flesh’ were highlights of the latter half of the set. The 2012 album ‘L’Enfant Sauvage’ was also represented, with its stellar title track. But there was more to it than all of that, as at one point, Joe Duplantier switched instruments with his brother Mario for a short jam to add some entertainment value towards the end. They also delved into a medley of Metallica covers, and it is for the best that they did not actually play any of those songs in entirety, because that may have singlehandedly ruined the entire set. They did put forth a full rendition of Sepultura’s ‘Territory’ as the final item of this epic, comprehensive set, and did a fantastic job of it.

The combination of Gojira’s music and the strobe-filled light show left everyone in the audience wide-eyed and stunned, as if it was a stimulant drug, and the entire crowd became one in exclaiming and responding to everything Gojira did on stage. The intensity in the building was so palpable that it could have been cut with a butter knife, and Joe Duplantier repeatedly remarked how blown away the band was by this crowd’s energy. There is so much truth to the theory that a great crowd elevates a band’s performance. This is why seeing Gojira at a festival or opening for some band in a stadium at 6 o’ clock simply should not count as seeing them, because there is no comparison between that and a Gojira headline show. Not to say that the band does not give it their 100% as a festival/opening act, but what you experience at a show like this one at House Of Blues Anaheim, standing amongst 2000-plus Gojira fans, is of a much higher level, far more enjoyable, a significantly better representation of the band’s musical repertoire, and their full stage production.

All attendees of this insanely spectacular Gojira concert were overcome with shock and delight, and walked away partially blind, deaf and delirious. If you haven’t attended a Gojira headline show yet, you are yet to witness the best live extreme metal on the planet.