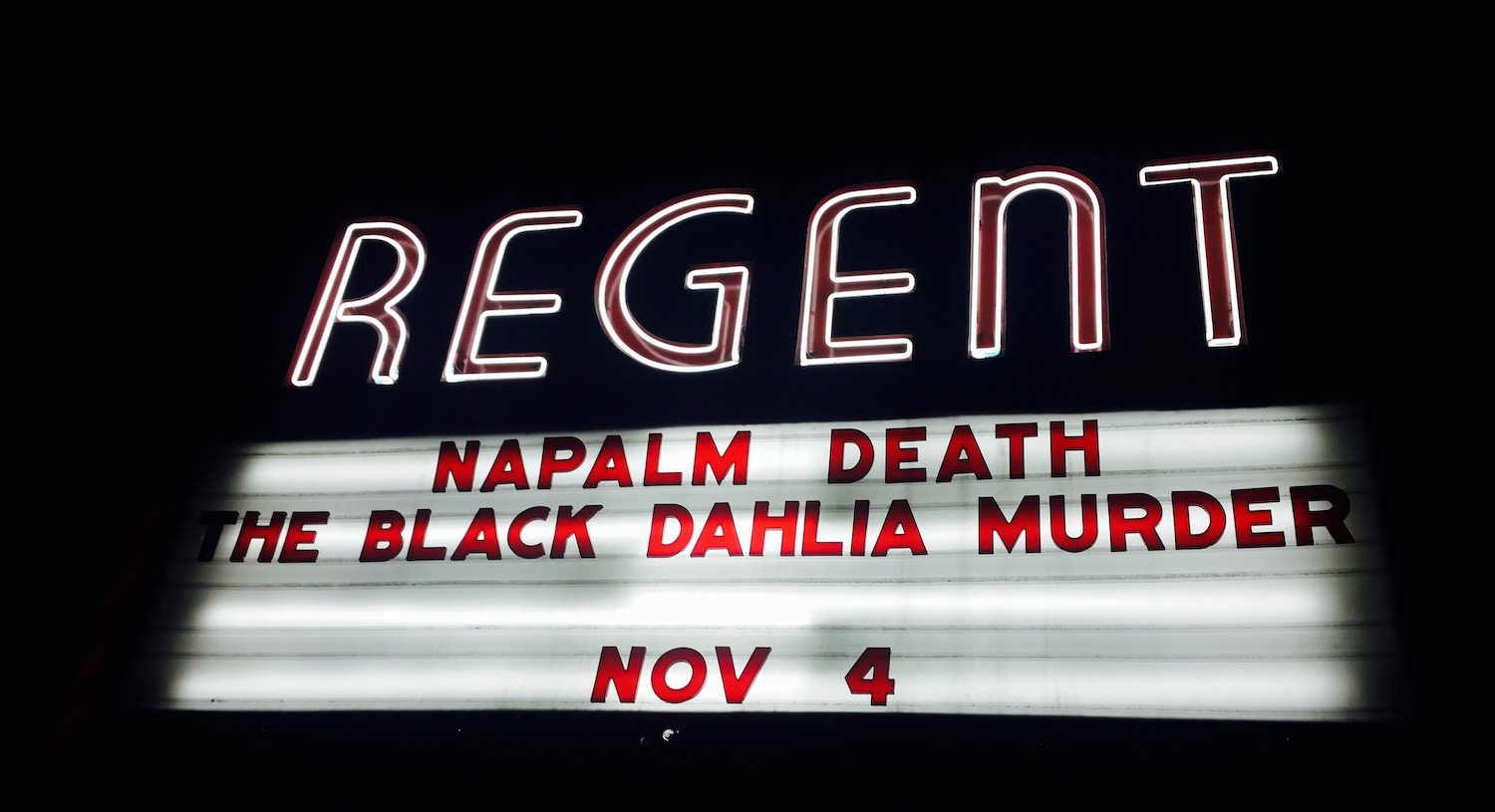 November 4th 2016, The Regent, Los Angeles CA: After playing with a diverse range of bands and opening themselves to newer audiences through their travels with the likes of Melvins, Melt Banana and Faith No More during the last year or two, British grindmasters Napalm Death are back touring North America, this time co-headlining a full-on metal package tour with The Black Dahlia Murder, featuring Abnormality as opening act, and Misery Index, Pig Destroyer and Power Trip joining the tour on select dates. In its first week, the tour arrived in Los Angeles for a well-attended affair at the Regent, and metalheads from all over town turned up to let their ears bleed with pummeling, grinding heaviness.

Doors opened as early as 6:30, and the first noticeable aspect of this event was the absence of a barricade, allowing fans to get up as close to the edge of the stage as they possibly could, and indulge in stage-diving later. Even though most photographers would probably disagree, this was crucial in making this an enjoyable show for fans as well as bands involved, and to that effect, Napalm Death frontman Barney Greenway told Metal Assault in an interview backstage at this very show that playing to barricaded floors was “killing” the vibe at the shows they’ve done on this tour so far, and it’s something they do not get to control. Thankfully, not the case here, as the authorities got it absolutely right.

At 7:30, Boston, Massachusetts death metal quintet Abnormality took the stage for a very well-received 30-minute set, attendees giving the band a warm welcome in exchange for the set of crushing deathgrind tunes they played on stage. Frontwoman Mallika Sundaramurthy got the crowd on her side as soon as she started delivering her growls which clearly result from supreme skill and technique, and her band mates exhibited solid musicianship and stage presence as well. Despite playing so early and while the venue was still filling in, Abnormality instigated the odd mosh pit or two, and garnered a unanimously positive response. As per the vocalist’s own admission, despite being in existence since 2005, the band hasn’t played in this area often, but that should change, because they certainly have fans here after this performance.

Next were Baltimore, Maryland extreme metal quartet Misery Index, bringing nearly 15 years of extreme music and expertly presenting a concise and deadly slab of it within their allotted 30-minute set duration on this stage. In terms of the musical flow of the evening, they took things up a notch from the first band with a richer and more varied sound, intertwining hard-hitting death metal with sweeping melodies, and a double lead vocal onslaught emanating from the combination of powerhouses Jason Netherton and Mark Kloeppel. The mosh pits were intensifying and the Regent was getting closer to hitting capacity. With their latest album ‘The Killing Gods’ now two-and-a-half years old, Misery Index must surely be nearing the end of this touring cycle, but knowing them, they’ll soon be hard at work on new material, because this is a band that has relentlessly hammered away through the years with undeniable consistency, and show no signs of burning out.

The turnout had reached a point where the collision of people trying to get in and out of the venue was leading to human traffic jams inside the building, not helped in any way whatsoever by large security personnel attempting to direct traffic but only succeeding in further blocking the pathways. At 9:10, the first co-headliner The Black Dahlia Murder arrived on stage in front of a completely packed Regent and played a set that lasted all of 55 minutes. After such excellent sets by Abnormality and Misery Index, the onus was on TBDM to maintain the high-octane atmosphere in the room. Regular readers of this site would perhaps recall that this band has never received a positive review on here for a live performance, quite simply because they always came across as boring and monotonous, and their sets felt far longer than they actually were. But, they either improved significantly as a live band or their new songs are better than the old ones, or a combination of both, because on this occasion they were surprisingly impressive and for the first time ever, held this writer’s attention for the entire set.

With a patched metal battle jacket and long hair, as opposed to the often shirtless and always short-haired persona he brought on stage in the past, this was a very different Trevor Strnad, almost not recognizable, and he fronted this performance with great aplomb. The contrast between his extreme screaming vocals and mellow speaking voice when addressing the crowd between songs was incredible and hilarious, and this quality of his most likely helped enhance the impact of the actual songs. The set was far from monotonous as the band transitioned from fast scorching tech-death to slow doomy passages and strong harmonies. The synchronicity between the five members was so tight and the flow of the music was so perfect that at times it felt like a symphony orchestra, which is rarely ever said about a death metal band. Any TBDM crowd is entertaining to watch, and this gathering at the Regent was no different, as many made their way onto the stage, some not getting off it quickly enough and taking selfie videos before getting a kick in the butt by the band members or roadies. Seeing oversized shirtless men get up on stage and then dive into the crowd was disgusting to witness, and special props to those in the front few rows who didn’t just clear out of the way to let any of these men hit the floor hard. Also worth mentioning is that fill-in guitarist Brandon Ellis did a tremendous job for TBDM. Having previously seen him play for bands such as Arsis, Finntroll and Insomnium, it’s almost as if this guy pops up out of nowhere on every metal tour, but rightly so, because he’s as good as anyone in this country. All in all, a scintillating set by The Black Dahlia Murder, one undoubtedly worthy of their co-headliner status on this lineup, as well as their stature in the metal realm.

And lastly, it was up to Napalm Death to bring this evening to its desirable and deserved conclusion, and so they did, with a typically fierce set that proved why they’re still considered the frontrunners of the genre they pioneered 30 years ago. Barney Greenway was at his usual spastic best, and the quality of his performance as a grindcore frontman at his current age of 47 surely indicates that this band can easily carry on for another 10-15 years at the very least. Early on in the set, he announced that the band would be playing songs they hadn’t played in a while or never played before, and they took it as far back as their 1987 debut effort in the process of doing so, although this crowd would have enjoyed this Napalm Death show regardless of the set list, such is the level of respect and admiration for this band in Los Angeles. Of course, one unique and entertaining quality of any Napalm Death show is Barney’s commentary between songs, and he remains one of the handful of heavy metal frontmen worth paying attention to even when not singing. But, his band mates are not to be forgotten or overlooked by any means either, as it takes absolute precision to deliver this style of music and make maximum impact, Shane Embury in particular standing strong with his exploits on bass and vocals.

One of the greatest bands spanning several generations of heavy music, Napalm Death are still delivering the goods and their to-the-point, ultra-intense sets are worth paying top dollar for.

On paper, this lineup looked like all four bands may turn out to be too similar to each other, but that was far from the case, as the show progressed from a great first band to getting better and better with each subsequent band. This Los Angeles crowd got the bang for their buck and more, as this is without doubt a flawless metal package absolutely not worth missing.