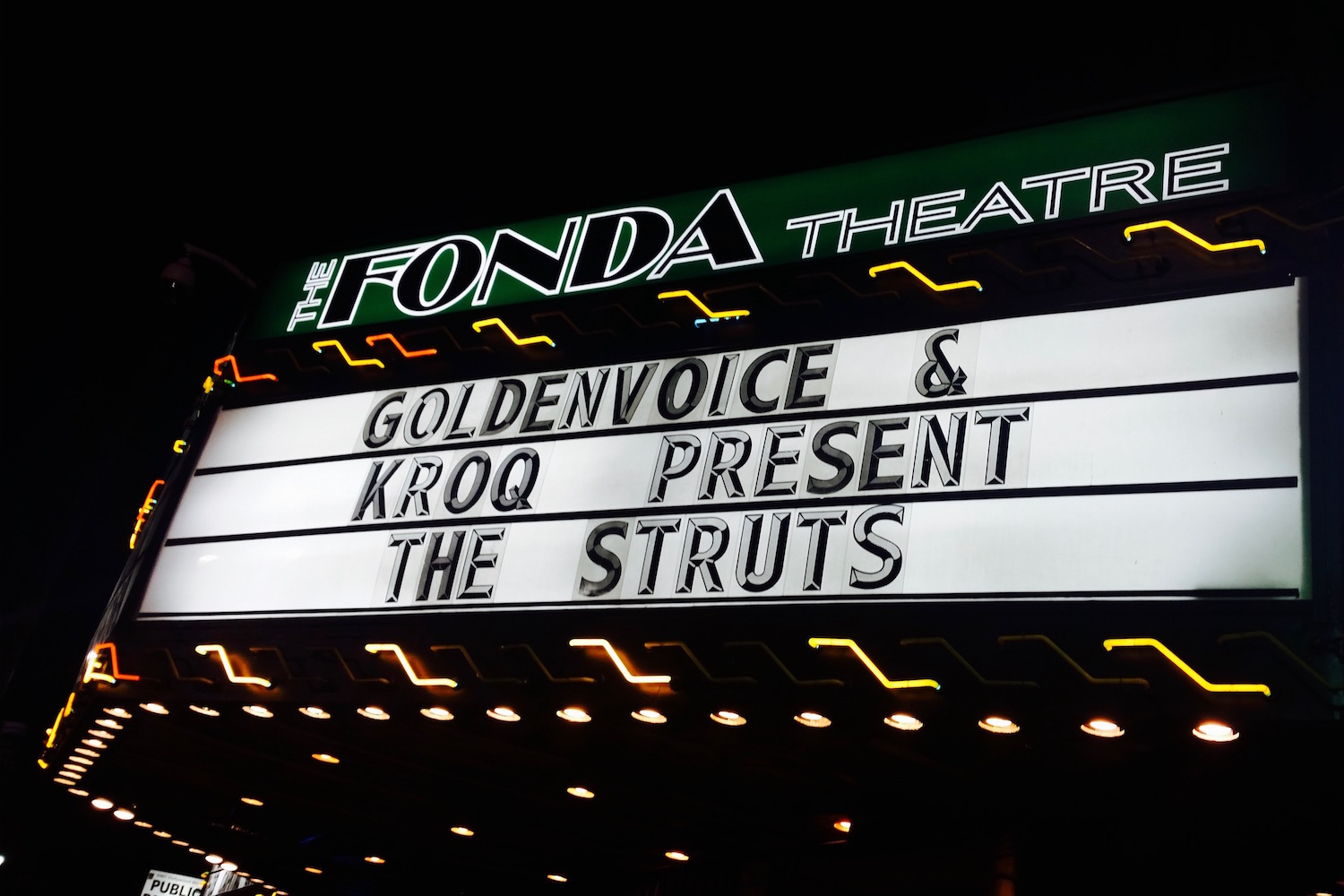 November 3rd 2016, Fonda Theatre, Hollywood CA: Originating in Derbyshire, England in 2009 and relocating to Los Angeles in 2015, The Struts are an old-school glam/arena rock band that has already gained widespread attention with their honest, wholehearted musicianship and bombastic live performances. Sharing the stage with the likes of Mötley Crüe and Guns N’ Roses and making high-profile television show appearances, and mostly touring extensively throughout the States since the release of their 2014 debut full-length ‘Everybody Wants’, The Struts have accrued enough of a fan-base of their own to sell out theaters nationwide on their current North American headline tour, which began on November 1st and soon made its way to the band’s adopted hometown for a sold-out gig at the Fonda Theatre in central Hollywood. Pre-show excitement was high, but nothing compared to that during the band’s eventual performance, as The Struts proved to be a breath of fresh air for those longing for good classic arena rock done right.

Hitting the stage at 10:15, The Struts played a little over an hour, performing almost all of the debut album as well as newer non-album singles. With a vintage four-piece singer-guitarist-bassist-drummer setup, The Struts turned out to be quite the throwback to a bygone era of rock bands that sold out stadiums everywhere they went, not only in their musical style but perhaps more so in the energy level, crowd interaction and visual aspect of their live performance. For first-timers, comparisons to bands like KISS, Aerosmith and Rolling Stones were drawn almost instantly and upon first sight and listen of The Struts as a live band. Led by the exemplary vocal delivery and magnetic personality of singer Luke Spiller, the band delivered the quintessential rock show here at the Fonda, and fans were in a state of hysteria from the first note to the last. If one were to imagine the perfect young rock band, The Struts would be very much prime candidates as its real-life version, such was the atmosphere they created on stage and in the entire building. 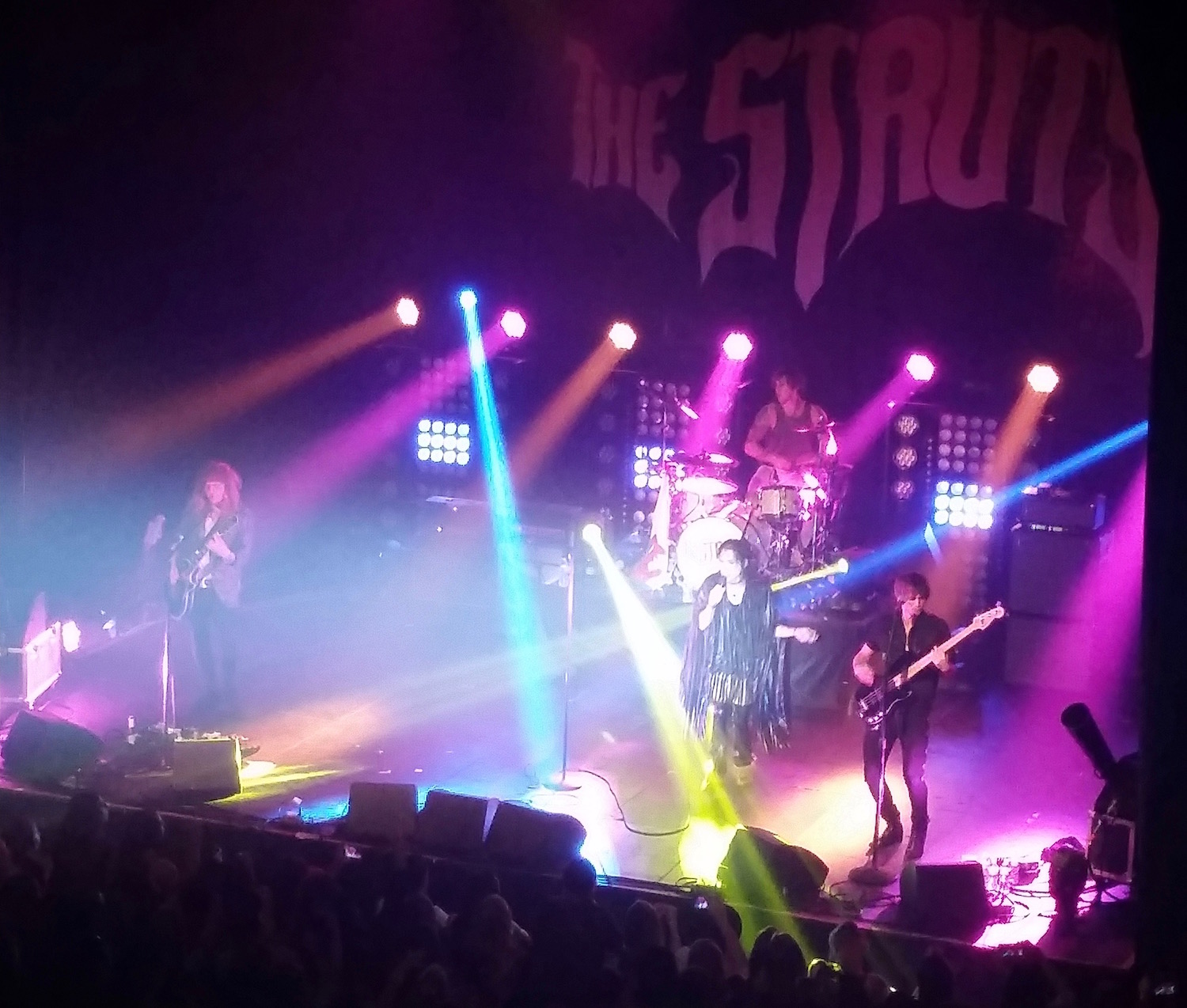 This band of four performed as a seriously cohesive unit and were in the zone right from the outset, breathing more life into their already lively tunes, and with elaborate lighting patterns used in conjunction with the music, as well as multiple costume changes for the singer, they gave this audience a real show without any kind of gimmick whatsoever. Spiller orchestrated several crowd sing-alongs throughout the set and got everyone in attendance to participate, even those in the balcony and uppermost standing general admission sections. It was a fun-filled rock concert like no other, and the smiles on attendees’ faces did not subside at any given moment. The Struts further endeared the audience towards them when Spiller mentioned that the band did not get nearly as much love in their home country and moved to the United States because they’ve been far better received here.

The Fonda rarely gets as packed as this, and it’s pleasant to note that it happened for a show that certainly deserved it. The Struts definitely attract a predominantly college rock kind of crowd, but there were also plenty of old-school rockers in the crowd, and quite simply put, this is a rock band everyone would enjoy experiencing live.One of the finest rock bands to have graced any Los Angeles stage in a long time, The Struts are well on their way towards becoming one of the biggest names in the genre and a true arena rock act.