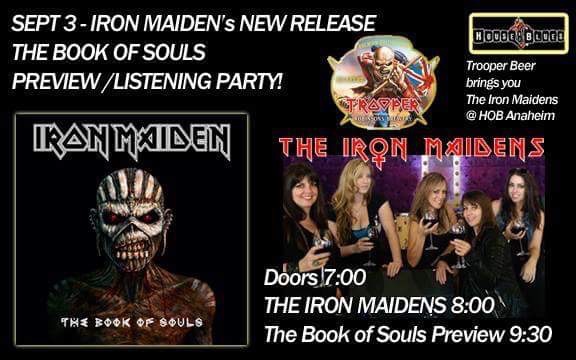 September 3rd 2015, House Of Blues, Anaheim CA:In the modern era of the music industry, album releases are nowhere near as highly anticipated as they once were, owing mainly due to the advent of pre-release leaks and piracy. But there are still a handful of exceptions to the norm, and a new Iron Maiden album is certainly one of them. The British legends are ready to unveil ‘The Book Of Souls’, their sixteenth full-length studio album, worldwide on Friday September 4th 2015, and in celebration of the most important metal landmark of the year, release parties were held all across the USA (and the world) last Thursday September 3rd. The undisputed choice for Maiden fans in Los Angeles and Orange County was the event at the House Of Blues Anaheim, featuring a live performance by The Iron Maidens. Fans gathered in huge numbers for what turned out to be the most memorable album release party of all time.

With the majority of attendees dressed in Iron Maiden shirts, an endless supply of Trooper Beer available at the bar, the world’s best Maiden tribute band performing on stage, only to be followed by ‘The Book Of Souls’ played in its entirety on the PA and accompanied by ‘Flight 666’ on the TV screens in the venue, this was an Iron Maiden takeover like no other, and for fans of the band, there was quite simply nowhere better to be. 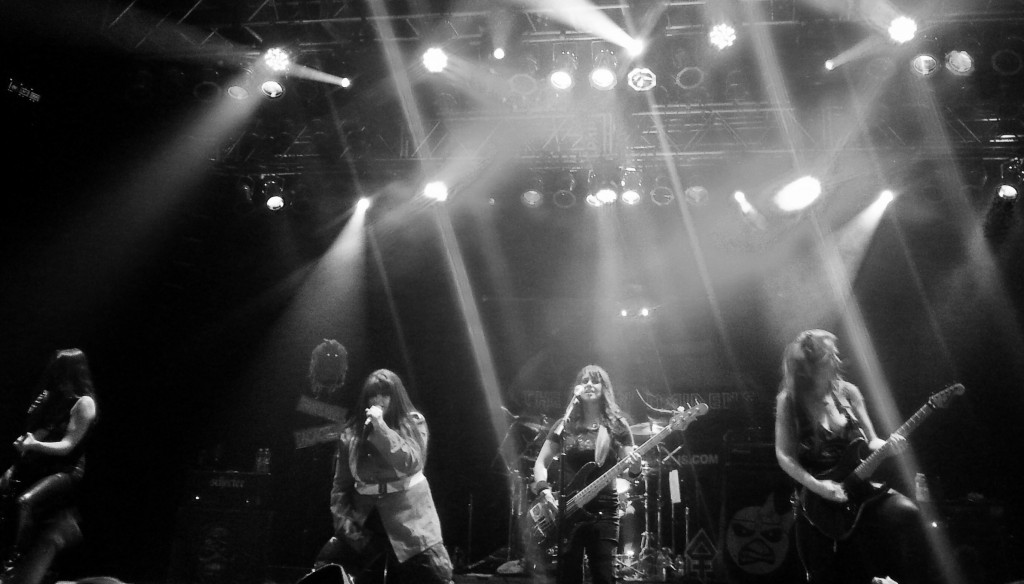 Listening/release parties are at the bottom of my list of priorities because they do not feature live music and I would always invariably choose an event with live music over a mere party, but this is where the organizers of this Iron Maiden release party stood out head and shoulders above their competitors. One cannot imagine a Southern California celebration of anything Iron Maiden without the participation of The Iron Maidens, and sure enough, they were chosen to do the honors here with a full 90-minute set prior to ‘The Book Of Souls’ listening session.

Promptly at 8 PM, The Iron Maidens hit the stage all guns blazing with the one-two punch of ‘Aces High’ and ‘2 Minutes To Midnight’, and played a Powerslave-heavy set with as many as four songs off of that album, which was perfectly appropriate because it was released on this date exactly 31 years ago. The beauty of The Iron Maidens’ tribute act is their typically excellent blend of the hits and the deep cuts, most of which Iron Maiden themselves have not touched in decades. ‘The Trooper’, ‘Fear Of The Dark’ and ‘The Number Of The Beast’ got the best response but diehards were losing their minds during the renditions of rarities such as ‘Sea Of Madness’, ‘Back In The Village’, ‘The Duellists’, and my highlight of the set, ‘Purgatory’. If I were asked to pick a set list for The Iron Maidens, I would have come up with exactly what they played last night. 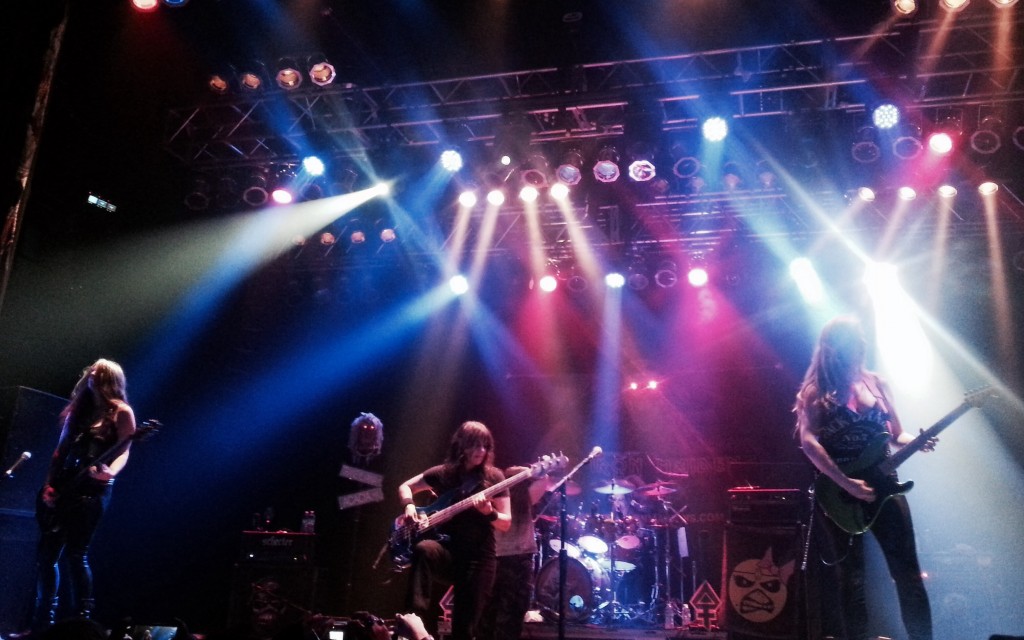 Aside from sonically justifying the brilliance of Maiden, The Iron Maidens also fully dedicate themselves to pay great attention to detail in replicating the visual aspect of the Iron Maiden concert experience, complete with vocalist Kirsten Rosenberg donning the same anti-fashion on-stage attire as Bruce Dickinson, and the appearance of several Eddie creatures at various points in the set. The Iron Maidens are constantly billed as the ‘best and only all-female Iron Maiden tribute band in the world’, but it’s high time the insistence on the ‘all-female’ part of that statement be dimished, because The Iron Maidens constitute the finest group of musicians paying tribute to Iron Maiden, male or female.

Following the Maidens’ set which ended right on schedule at 9:30, ‘The Book Of Souls’ was played on the PA. No one actually listens to the album at listening parties but it was quite pleasantly surprising to note that a sizable portion of the crowd stayed and quietly listened to the album. Reportedly, this was the first listen of the album for nearly everyone still present inside the House Of Blues Anaheim, which means these people chose not to listen to the leaked version which surfaced on the internet a few days ago. These people waited to listen to it here at this party, which not only proves the power of Iron Maiden and the relevance of this event, but also shows that the ill-effects of pre-release piracy can be eradicated simply by patience and self-control. Based on the looks on people’s faces and the comments they were exchanging with each other, all of them seemed to be enjoying ‘The Book Of Souls’, and most of them stayed for the entire 90-minute spin of the album.

In addition to all the high standards they continue to set with all aspects of their musicianship and live performance, Iron Maiden are now also showing how a new album needs to be promoted, as they are poised to dominate record stores, online markets and airwaves with ‘The Book Of Souls’. 2015 is the year of the Maiden, and it’s a good time to be a fan. 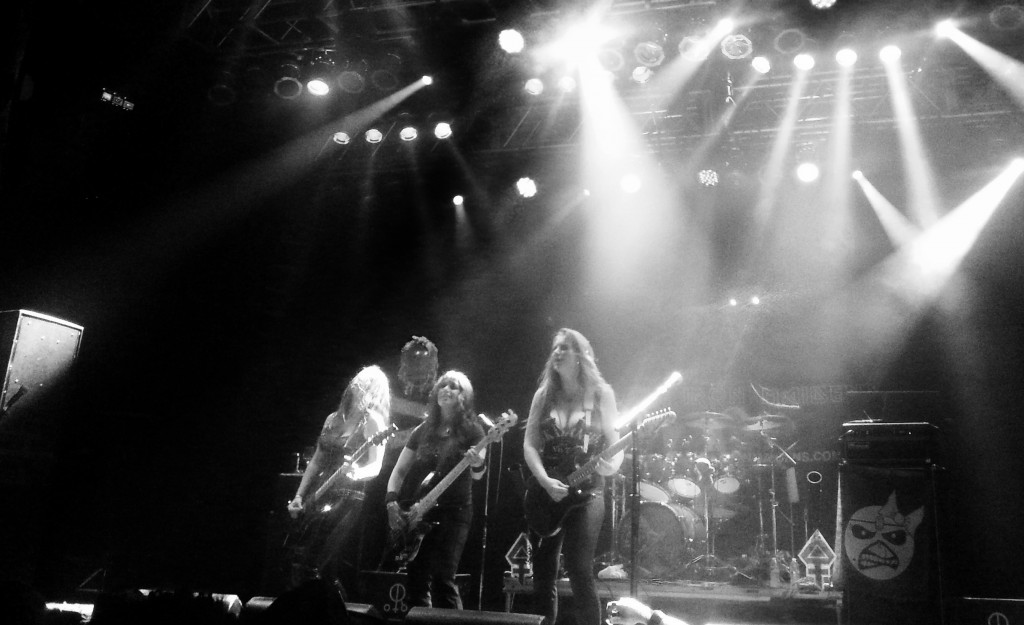