By Andrew Bansal (Circle Of Violence review by JD Ferraro) 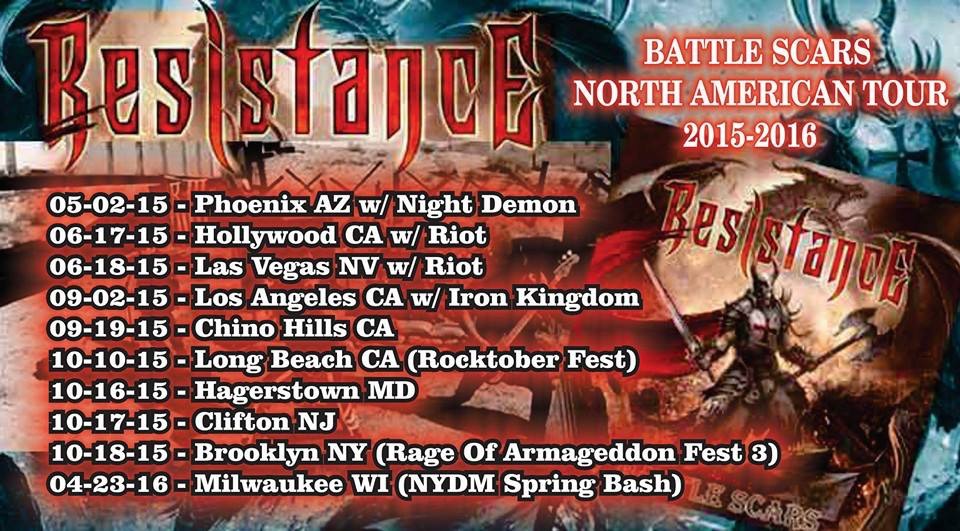 September 2nd 2015, Loaded Rock Bar, Hollywood CA: Following the April 2015 release of their highly impressive new EP ‘Volume 1: Battle Scars’, Los Angeles-based classic heavy metal band Resistance have made a slew of wisely selected live concert appearances in their hometown and beyond, sharing the stage with the headliners they fit perfectly with, such as Riot V. In the leadup to an East Coast mini-tour, Resistance played a gig at Loaded Hollywood last Wednesday September 2nd. They were originally billed as main support to Canadian old-school metal group Iron Kingdom, but upon that band’s visa-related cancelation, Resistance became the main focus at this event, and were expected to deliver a performance that would deem them worthy of the headliner spot.

Doors opened at 9, and starting the show at 9:30 were Orange County extreme metal quintet Voices Of Ruin. Fresh off their successful outing at the Whisky less than a week ago opening for Insomnium and Omnium Gatherum, Voices Of Ruin put forth another solid exhibition and won the appreciation of everyone in the crowd. The experience they have gathered through playing for a number of years clearly shows in everything they do on stage. The sonic balance between aggression and melody is supreme, and between songs, the vocalist knows exactly what to say to the crowd and how to say it. The manner in which he turned a dead silent school night Hollywood audience onto his side during this set being a classic example of just that. If you like your metal extreme, Voices Of Ruin is certainly up your alley.

At 10:30, Resistance hit the stage for a 40-minute set comprising a hefty dosage of the ‘Volume 1: Battle Scars’ EP, some material from the 2004 full-length ‘Lies In Black’, and a cover of Iron Maiden’s ‘The Trooper’ with Voices Of Ruin vocalist Dave Barrett as guest performer. Resistance brought their classic Iron Maiden/Judas Priest/Iced Earth style of musicianship to the forefront and filled the confines of Loaded Hollywood’s inner room with righteous metal guitar harmonies and sky-high clean vocals. Resistance have been in existence for quite a while and just like Voices Of Ruin but to an even greater extent, their approach breathes professionalism and experience. This was their first ever gig at Loaded, and they seemed to go through some jitters early on in the set as they got themselves familiarized with the stage and the sound setup, specially with having to use the house drum kit. But they adjusted well, and it was smooth sailing for the most part. ‘Vlad’ from the latest EP stood out as the highlight, and ‘The Trooper’ cover got the crowd most excited. They played four of the six tracks on the EP, and if anything, they should play the entirety of it because it’s by far their best work. This was a stripped-down Resistance show as it was missing the visual aspect, the band not able to fit their swords and other props due to the lack of room on this stage, but for old-school metalheads it was a genuinely enjoyable set. Resistance for the win.

At this point, I departed from the venue and did not catch Circle Of Violence’s set due to other commitments, but my writer JD Ferraro was in attendance to review the set for us. Here’s his take:

“When I entered the venue room to watch Circle Of Violence, I was immediately assaulted by noise. Not music, not metal, but noise. The kind of noise I hear when I go into Sam Ash Music, and there is some guy playing a guitar, plugged into an amp with the distortion maxed out, strumming open strings or running a pentatonic scale in hammer on/pull offs, that would make Tony Iommi cringe. I understand the fashion of metal Circle of Violence was attempting. I have heard this style pulled off with success by several bands. When the vocalist is making guttural sounds that Satan (All Hail and Prostration!) can not comprehend, the musicianship needs to be on point to balance out this musical archetype. This did not occur at the Circle of Violence performance. The crowd was only responsive to the repeated ‘thank you’ calls from the vocalist, whose saving grace was a humorous shirt reading ‘I Fuck For Satan’. When your guitarist is to drunk too stop thanking people for beer, and his playing is indistinguishable from rocks being put through a blender, it is time to re-evaluate your finished product. I will give credit where it is due though, they had a good rapport with the crowd, and did attempt to close things out with a Slayer teaser. Circle of Violence, should know the importance of the ‘Money Shot’, because they missed the target on this one.”

Overall, a pleasant, low-key night out at Loaded, musically dominated by Resistance and ably supported by Voices Of Ruin.