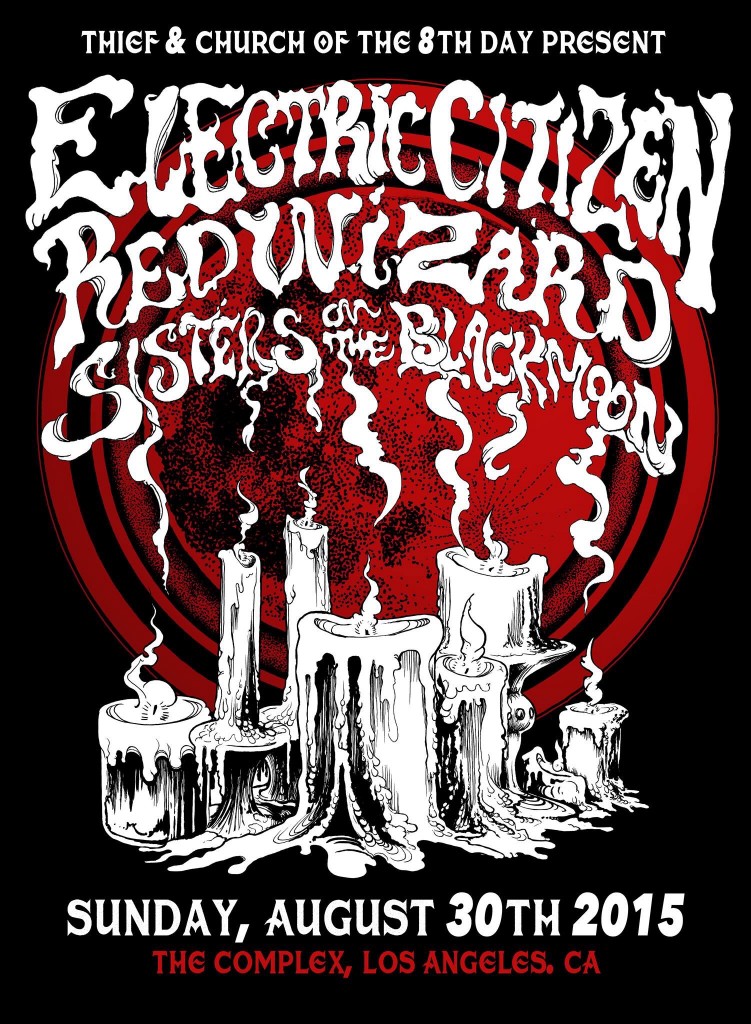 August 30th 2015, Complex, Glendale CA: Following their first leg of US tour dates supporting Pentagram, Cincinnati, Ohio heavy rock quartet Electric Citizen visited Los Angeles for a headline gig at Complex in Glendale put together by Church Of The 8th Day in association with Thief, who brought this band to Orange County for the Psycho California Fest earlier this year. The show also included support act Red Wizard from San Diego and local opener Sisters Ov The Blackmoon for an out-and-out stoner rock lineup that promised to treat the LA underground faithful to a rifftastic avalanche of heavy music. Quite fittingly, this event was on a Sunday, because the church of riff worship was certainly in session.

Doors opened at 8:30, attendees trickled in, and at 9:20, Sisters Ov The Blackmoon began proceedings with a 30-minute set presenting their righteous brand of occult-themed stoner doom. During this set, the confines of Complex resonated with heavy riffs and crushing rhythms aplenty, and these instrumental layers were fronted by incisive female vocals that carried the occult vibe to perfection. Sisters Ov The Blackmoon are in their infant stages as a band and have largely performed in the heart of Los Angeles and Hollywood, but this felt more like the right setting for them, as this was the heaviest and loudest they’ve ever sounded on stage, and song by song, they turned more first-timers into fans. Sisters Ov The Blackmoon are poised for their first ever tour in the form of a short US West Coast run in September, and are sure to expand their fan-base further. The best LA bands are those that sound nothing like the typical LA bands, and with their undeniably excellent salute to classic stoner doom, Sisters Ov The Blackmoon find themselves in that category as well. They played five songs in this set, including the entirety of their four-song debut EP ‘Blood Cauldron’ and an unreleased tune called ‘Devils’. Even though the next two bands enjoyed larger turnouts and louder applauses, Sisters Ov The Blackmoon stood out as the slowest of the lot, and because of their skillful utilization of every single note, the riff patterns and chord progressions in each of their tunes turned out to be far more memorable than that of the other bands, as the tunes ‘Haunt’, ‘Devils’ and ‘Sisters’ stayed in mind long after the end of the show. Sisters Ov The Blackmoon created a great first impression on the Glendale/Church Of The 8th Day/Complex underground heavy music community, and this definitely will not be their last show here.

Next up, San Diego quintet Red Wizard took the stage and laid into some delightful fuzz-laden jams, complete with an aptly chosen cover of Black Sabbath’s ‘The Wizard’, performed in the most authentic manner possible with the singer playing the harmonica parts. There was clearly a sense of primal rawness in Red Wizard’s musicianship and performance that captured this audience straightaway, as the entire crowd was seen head-banging in unison for large portions of the set. Red Wizard have made the short northward drive from their hometown to Los Angeles on quite a few occasions in the five years of their existence thus far, but this was somehow Metal Assault’s first time experiencing this band live, and henceforth, this band will always be on the radar. Along with bands such as Monolith and The Great Electric Quest, these dudes are showing that the San Diego heavy music scene is alive and well. The powers of the Red Wizard are indeed magical.

And lastly at 11 o’ clock, Electric Citizen appeared on stage to bring the evening to a spectacular close. They opened for Wolfmother at the House Of Blues Sunset Strip in the summer of 2014 and succeeded in making an impact, but witnessing them here as a headline act on this small stage in this amazingly intimate venue was a completely different world in comparison, and this was undoubtedly the real Electric Citizen experience. That said, it makes perfect sense to be opening for Pentagram on their current touring run because singer Laura Dolan portrayed an on-stage personality that resembles a Robert Plant with the vocal stylings and facial expressions of a Bobby Liebling. ‘Light Years Beyond’ off of their 2014 debut full-length album ‘Sateen’ was by far the highlight of the set, and is by all means one of the best stoner rock songs to have come out in the recent past. Ohio is bristling with musical creativity, and this Cincinnati band is making a positive contribution to the state’s reputaion. As long as groups like Electric Citizen are creative and active, stoner/doom will never fade away as a mere phase or fad.

The turnout was appreciably great for a Sunday, and the temperatures inside the venue were pleasant as the air-conditioning was more effective than usual. Thief and Church Of The 8th Day gave their Los Angeles/Glendale patrons a flawless evening that left many pairs of ears ringing and necks hurting, but above all, faces smiling.