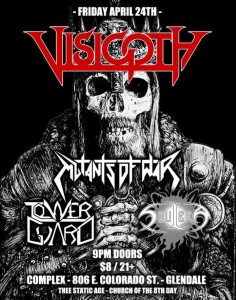 April 24th 2015, Complex, Glendale CA: Following their signing to Metal Blade Records and the early 2015 release of their debut full-length album ‘The Revenant King’, Salt Lake City traditional metal flag-bearers Visigoth embarked on their first ever tour as a band this April. Starting out with a hometown gig and making their way through their conquest of the West Coast, they arrived in Los Angeles for a headline show at Complex in Glendale, put together by Church Of The 8th Day and Thee Static Age and also featuring local openers Mutants Of War, Soulera and Tower Guard. Visigoth have developed a cult following among genuine fans of all things old-school and traditional in heavy music, and their first visit to Los Angeles was expected to be a real treat for those in attendance. It was an evening filled to the brim with tales of warriors, kings and steel, and was accompanied by copious amounts of head-banging.

At 9:30, Tower Guard started proceedings with a righteous blend of aggression and melody, very much reminiscent of the likes of Skeletonwitch. They excelled at every aspect of their performance and put great amounts of energy into it, making them likable for the first-timers in the crowd. Besides giving it their all for their own set, they also stayed for the rest of the show and showed their full support to the other bands on the lineup, unlike most LA bands who just show up, play and take off. Tower Guard contributed positively to this show in more ways than one.

Next up were Soulera, who made an extremely strong first impression with their recent gig in Hollywood and laid down an even better exhibition of clean singing, speed and shred punctuated by mellow guitar interludes. The talent in each member of this band was there to be seen and heard by the audience, and was utilized in full through this set. In addition, the top-notch sound quality of the Complex’ PA and the exemplary job done by promoter/soundman Daniel Dismal further enhanced the impact of Soulera’s set. For fans of pristine progpower, Soulera is most certainly worthwhile.

Mutants Of War took the stage next to bring the thrash element to this show. It had been at least four years since I last saw this band, and that time their lineup was much different than what it is today. They were absolutely relentless in this high-octane performance of theirs, standing out as the only one-guitar band on this bill and particularly impressing with the vocal delivery as the high-pitched screams were greeted with raised fists and invisible oranges. It is great to see Mutants Of War alive and kicking again, and they look and sound ready for a revival.

And lastly, Visigoth began their monumental set at around 00:10 and scorched the stage with a delightfully old-school metal performance. Heads were banging from front to back and the chorus lines were being sung along, as vocalist Jake Rogers took complete command of this audience and this room, while his band mates focused on nailing all their parts right. Starting with the instantly catchy ‘Mammoth Rider’, they went from strength to strength, truly putting forth the best possible representation of their debut album with fantastic renditions of tracks such as ‘Dungeon Master’, ‘Blood Sacrifice’ and the title track. Besides, they also included a brand new tune, their own hometown pride anthem “Salt City Livin'”. Visigoth is known to play obscure NWOBHM covers in their live shows, and sure enough, they did the same here with the inclusion of ‘The Spell’ by Demon.

This was as good a performance as any Visigoth fan in attendance could have imagined or expected, and will stand strong in memory as one of the finest representations of classic heavy metal this town has seen. Here’s hoping for several more Visigoth gigs in LA on a regular basis, and all in all, this was a flawlessly glorious old-school metal evening at Complex.