April 23rd 2015, The Wiltern, Los Angeles CA: In the leadup to the release of their seventh full-length studio album ‘Sol Invictus’, San Francisco experimental rock veterans Faith No More embarked on a North American headline tour in April 2015, and arrived in Los Angeles for three nights at the Wiltern, each night featuring a different set list and opening act. The second of these shows took place on Thursday April 23rd and was sold out in advance. Ticket holders started lining up in the early evening, and all was in readiness for a potentially fascinating event.

Faith No More have dabbled in a variety of musical styles over the years and attract a diverse crowd as a result, but the atmosphere inside the Wiltern was no different to that of a typical hard rock/heavy metal show. A lot of familiar faces from those shows were seen in attendance, there was the dude on the general admission floor yelling ‘Slayer!’ during the opening act, and an inebriated fanboy in the balcony shouting uncontrollably at the top of his voice even while Mike Patton was talking to the crowd. But as I would discover soon enough, a Faith No More is like no other.

Before we got to that, there were The Urinals serving as the opening act for this show. Theirs was one of the blandest, most repetitive and unenergetic performances I’ve seen in a long time. More than anything it just proved that playing punk rock without energy is pointless. Most of the older punk bands are no longer capable of delivering a worthwhile show and it should be solely left in the hands of younger bands. The upcoming Faith No More gig at the Observatory in Santa Ana on Saturday April 25 will feature Dave Lombardo’s Philm, quite simply the best possible choice as opener for this headline act, and it’s a pity that they weren’t added on the entire tour. The end of The Urinals’ 45-minute set could not come soon enough.

At 9:45, the members of Faith No More appeared one by one, and even before they started playing, the mere sight of their stage setup was sufficient to not only get the audience’s undivided attention but raise their already high level of anticipation further. The band members were completely clad in white, as was the stage, amps and monitors included. Flowers were lined up all along the front edge of the stage and everywhere else possible, altogether giving the show a strong visual aspect. But once the set started, it was all about the music, and the fans gave the band a tremendous response (reportedly better than that of the audience here for night #1) to tell the band that they loved every moment of it. 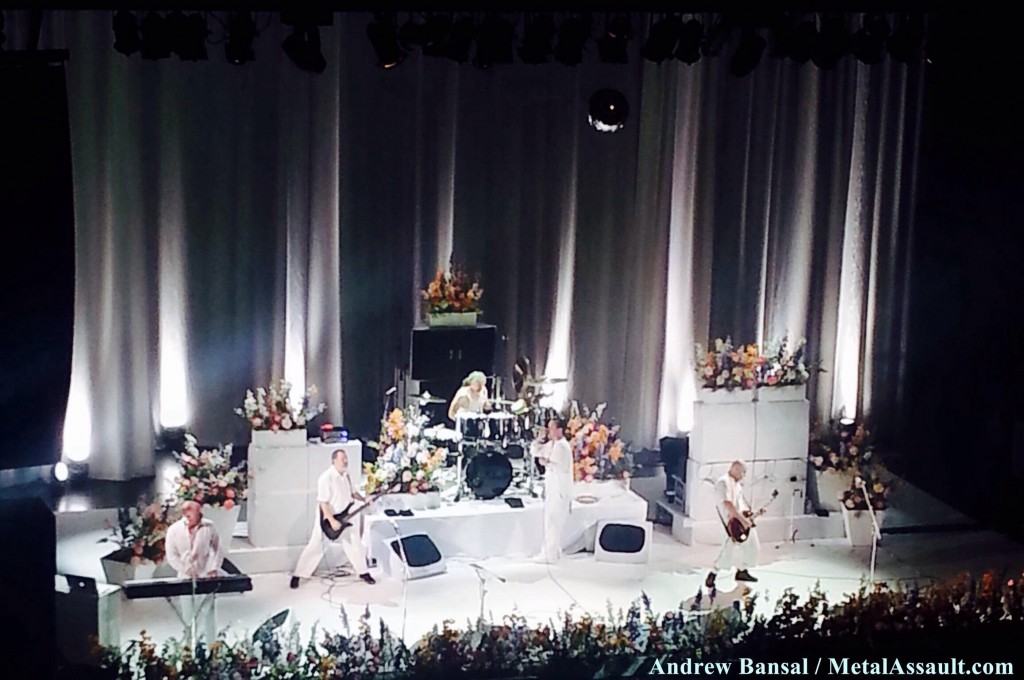 Presenting a variety of new and old material through this 19-song set, Faith No More entertained longtime fans and first-timers in equal measure, and some FNM concert veterans were quoted saying that this particular gig was better in every sense than the band’s past few Los Angeles outings. As for myself, I had never seen them before, and considering the fact that all popular heavy bands I’ve seen for the first time this year have put on majorly underwhelming shows (Dokken, Van Halen, Mushroomhead, Sixx:A.M. and Electric Wizard to name a few), I did not know what to expect from this Faith No More gig, but was pleasantly surprised to find the performance largely appreciable.

Sonically, the band is most certainly dominated by Mike Bordin’s drums and Billy Gould’s bass, but the guitar and keyboard layers, put down by Jon Hudson and Roddy Bottum respectively, are still prominent enough for fans of the more conventional and old-school varieties of heavy music to be able to enjoy the live sound as a whole. And of course, then there was the frontman, Mike Patton, presenting a wildly varied range of vocal stylings, at times hard to keep up with for those not very deeply immersed in the Faith No More discography. Patton and Bottum addressed the crowd on a few occasions but did not overdo it, and focused primarily on the music. The black leather-clad gimp that’s a visual component of this show was none other than Duff McKagan of Guns ‘N Roses, which many thought was a joke when Mike Patton mentioned his name but it was later confirmed that the gimp was indeed McKagan himself.

‘We Care A Lot’, which ended the first encore, was the highlight of the set in my opinion, and they should have perhaps closed the show with it instead of coming back out to play ‘From The Dead’. In terms of the sound quality and the view of the stage, since I somehow ended up with two tickets, one on the general admission floor and the other in the mezzanine section of the balcony, I had a chance to explore both vantage points, and it must be said that the balcony is a far better place to watch Faith No More at the Wiltern, and that might be the case for upcoming shows at this venue.

Overall, a truly unique sonic and visual exhibition. Faith No More isn’t for everyone, but is certainly one of a kind.