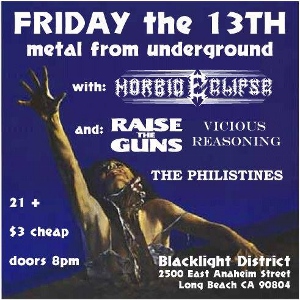 February 13th 2015, Blacklight District Lounge, Long Beach CA: Orange County’s newest and fastest-rising metal entity Morbid Eclipse turned quite a few heads with their demo releases and first few live gigs in 2014, and with an enhanced visual show which has offered something new each time they’ve played, they took the stage on Friday the 13th last night at Blacklight District Lounge in Long Beach, with a slew of local bands, for a 21+ show that cost merely $3 at the door. I saw Morbid Eclipse open for Raven and Night Demon in Santa Barbara under different circumstances a few months ago, but was certainly looking forward to my first proper Morbid Eclipse experience. The expectations were sky high, and they were not only met but were far exceeded.

Much earlier in the evening, the show began at 7:30 with Los Angeles-based trio The Dramedy, featuring Dave Davids, guitarist in rock ‘n roll outfit The Vigils, handling vocals and guitar in this band. The Dramedy presented a mix of punk and rock ‘n roll which perhaps couldn’t be described as strictly metal but it was full of energy and played loud, and ended up being a good fit on this otherwise all-metal lineup. Considering that it was their first ever live show, they did themselves good, and one should keep an eye out for more shows from them very soon.

What followed was a sequence of bands that entertained, but not for the right reasons. One band played the worst version of Metallica’s ‘Whiplash’ I’d ever heard, so bad that it was thoroughly enjoyable. The guitarist of another band was so shabbily dressed that he looked like he had just stepped away from an Xbox gaming session at home and turned up for the gig, and what’s more, as he played the guitar, it wasn’t even plugged in and he didn’t realize it until halfway through the set. Finding it difficult to hold my attention towards proceedings on stage, I took a brief break to step outside and get some Mexican food, which didn’t help matters as the combined effect of the food and the underwhelming musicianship was now putting me to sleep. Finally, enduring all of this, I was ready for Morbid Eclipse as they prepared to hit the stage at 11:45, and I held high hopes for their set to be worth the wait. 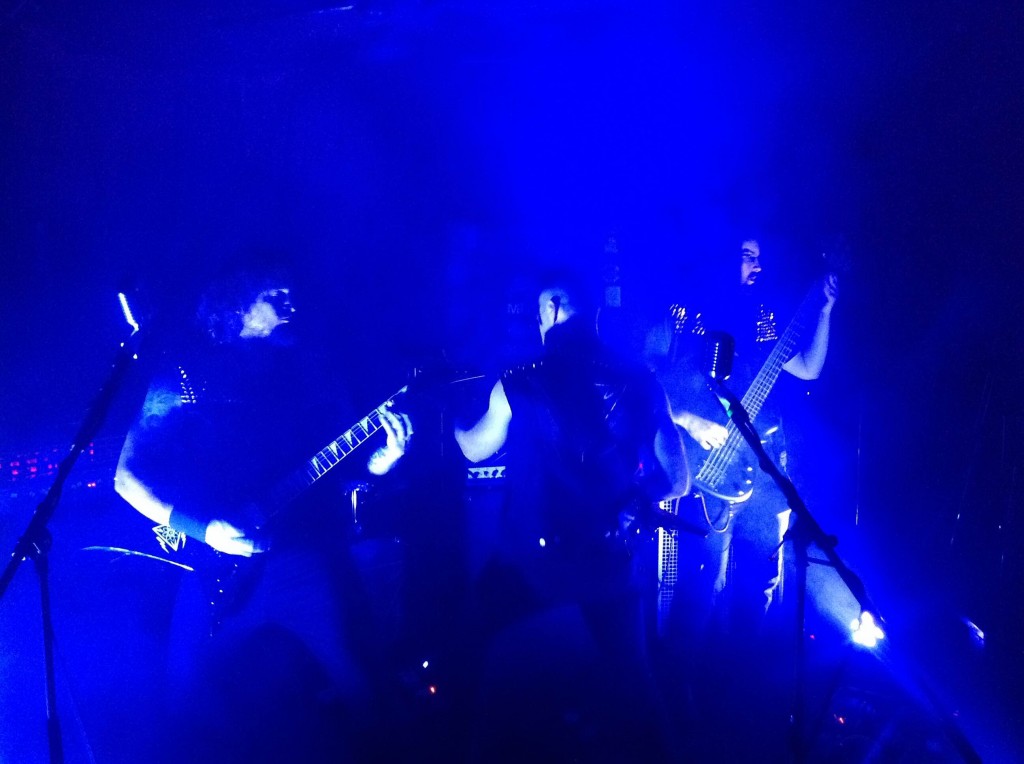 Right from the get-go, it was clear that this band was on an altogether different level, and they made an instant impact on this crowd which was otherwise dead for the rest of the evening. As Morbid Eclipse went about presenting their brand of extreme metal from outer space, more and more people got drawn nearer to the stage, and mosh pits started breaking out during the faster, thrashier segments. Once the set was seemingly done with, an encore was strongly demanded and the band obliged. The usage of their own stage lights heightened the strength and intensity of the show several notches, and in addition, they incorporated a scientist and a spaceman as characters that were part of the show and brought to life some of the lyrical concepts and story lines. Blending elements of doom, black metal and thrash and fronted by excellently enunciated harsh vocals, Morbid Eclipse’s music came across with tremendous power and for anyone claiming to be into metal, it’s impossible to dislike. Even for people who do not dig extreme metal as much, Morbid Eclipse’ presentation might compel them to do so. Aside from playing guitar and delivering vocals, frontman Zach Friedberg also introduced each song with its concept, and guitarist Andy Hicks was his perfect ally, not only on his instrument but on backing vocals as well, while Ben Chamberlin (bass) and Chris Vega (drums) held the rhythm section strong. But the most notable musical aspect of Morbid Eclipse’ live sound is the class and quality of their guitar tones, which is an aspect often overlooked in this genre, but this band shows what a difference it makes as the clean and heavily distorted varities of their sound were both equally highlighted by their tone.

Compelling music, high-quality equipment, great visuals, and an easily identifiable logo. Morbid Eclipse have it all to rule the planet, and if you haven’t yet familiarized yourself with them, you are strongly advised to do so and get yourself inducted into the atomic cult in the process, because a Morbid Eclipse live show is hands down one of the greatest things you will ever see.