February 11th 2015, The Whisky-A-Go-Go, West Hollywood CA: Known for his contributions to several hard rock/heavy metal bands and projects including those of popular artists such as David Lee Roth, Marilyn Manson and Rob Zombie over the years, guitarist John 5 has also maintained a solo career for the past decade, and even though his solo work has an unsurprisingly low-key fan-following as compared to the bands he’s been in, he’s not the kind of guitarist that puts out an album once in a blue moon. John 5 has consistently released solo albums full of excellent, highly respectable material, and the latest effort, his seventh solo full-length ‘Careful With That Axe’, came out in 2014. Throughout these solo albums he has displayed a style that’s individual but not overly pronounced or exaggerated. Currently, he is in the first phase of his first ever US tour as a solo act, named ‘John 5 & The Creatures’, and played a highly entertaining gig last night at a sold-out Whisky-A-Go-Go.

It was actually a pleasant surprise to see this level of interest for a solo John 5 show, as the Whisky was completely packed by the time his band was ready to take the stage, which they promptly did at the scheduled time of 11 PM. The colorful crowd consisted of Sunset Strip regulars, Rob Zombie/Manson/John 5 die-hards and local musicians, and the atmosphere was filled with lively anticipation. 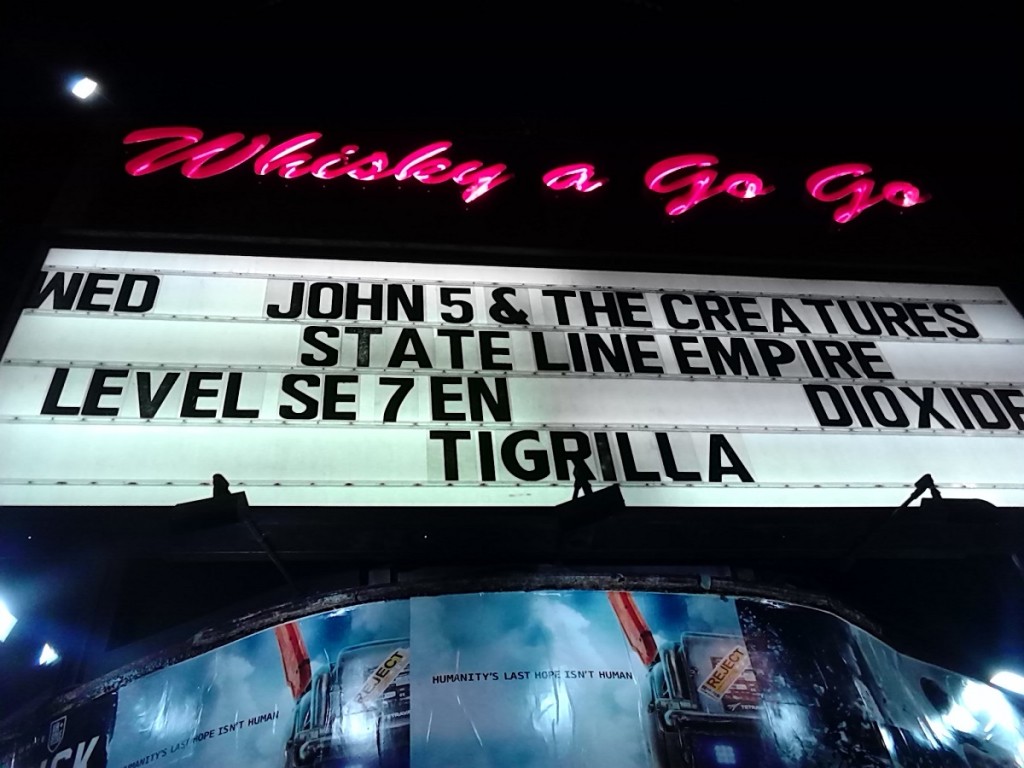 John 5 and his two band mates descended down the stairs onto the historic Whisky-A-Go-Go stage and began a 70-minute set with ‘Flight Of The Vulcan Kelly’ off of ‘Careful With That Axe’. The album was heavily represented with as many as seven tunes from it, but the all-instrumental nature of the set bridged the gap almost completely between new and old tunes as there were no words or lyrics to associate with them. That being said, there were certainly some older gems included, such as ‘Sin’ from the Songs Of Sanity album and ‘Feisty Cadavers’ off of John 5’s solo debut effort Vertigo. Besides the smooth flowing guitar-work which was highlighted far greater and more justifiably during this show than any of John 5’s appearances with bands or other artists, he brought the visual aspect with glowing guitars and masked characters appearing at various points of the show and succeeded in delivering a worthwhile experience for the paying fan.

Besides John 5 himself, the efforts of drummer and longtime collaborator Rodger Carter and bassist Ian Ross (picked out of a Musicians Institute audition as a fill-in for Greg Bissonette who worked on the latest album with John 5) were not overshadowed, specially in this power trio setup, and John gave them due credit whenever he addressed the crowd in between tunes. The set was being appreciated in full by this crowd, and after a great rendition of Michael Jackson’s ‘Beat It’ which is also featured on the God Told Me To album, John brought out two special guests, Piggy D, bassist from Rob Zombie’s current band, and the one and only Michael Anthony, whose mere arrival on stage brought the house down. But, in his typical demeanor, he refused to steal the limelight and shifted the audience’s attention back to John 5. Van Halen’s ‘Somebody Get Me A Doctor’ featuring Michael Anthony on bass and vocals and Piggy D on backing vocals was played and the crowd loved every moment of it as Michael sounded excellent and was full of energy.

After the exit of the special guests, John 5 and the Creatures ended the set with a covers medley of some very easily recognizable hard rock and heavy metal classics which kept the crowd’s decibel levels at maximum. Overall, the selection of jams and interludes that comprised this set took the audience through a diverse journey of modern metal, rock, jazz, blues, punk and various other moods and vibes. The focus was very much on the guitar but not in a boring self-absorbed virtuosic manner whatsoever. This was no Yngwie show, and that is a huge compliment. For fans of John 5’s solo work or any of the bands he’s been in, this show should serve as quite a treat, and even for critics, haters, non-fans and non-believers, it’s the kind of performance that might just sway you in the other direction.