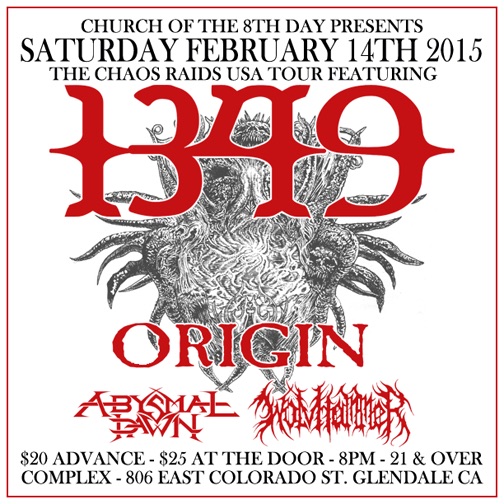 February 14th 2015, Complex, Glendale CA: Norwegian black metal band 1349 released their long-awaited fifth studio album ‘Massive Cauldron Of Chaos’ in September 2014, their first full-length release in more than four years. To present their newest creation of black metal savagery, 1349 embarked on the ‘Chaos Raids USA’ tour in early February 2015, headlining a skull-crushing package comprising Origin, Abysmal Dawn and Wolvhammer as support acts. The tour arrived in Los Angeles for a gig at Complex in Glendale, presented by Church Of The 8th Day. All tickets to the show were sold out in advance, the anticipation surrounding it was massive, and the atmosphere inside and outside the venue before the start of the show on a lovely California evening gave every indication of the possibility of a greatly memorable event for all involved.

Minneapolis MN quintet Wolvhammer opened the show and started their set at 9 PM, even as the extremely long queue of ticket holders outside was being dealt with and people were let inside as smoothly and swiftly as possible. Wolvhammer’s brand of black metal intertwined by sludgy outbreaks and the power of its execution on stage instantly proved why the band has received high praise from critics and first-timers in the recent past, specially since the release of their latest full-length ‘Clawing Into Black Sun’. The crowd’s response to their set here was unanimously positive and they deemed themselves as worthy openers of this stellar lineup. Their three-album old career looks poised to go far and deep in the years to come.

It’s coming up to that time of the year when shows in the Los Angeles area are a hot experience temperature-wise, as was the case at this one. This venue was decently equipped to provide attendees relief from the heat, but the sheer number of people packed inside throughout the evening kept the temperatures and humidity high regardless. Los Angeles death metal veterans Abysmal Dawn raised it further with a scintillating performance as the quartet’s hometown fans showed their approval loud and proud. Focusing primarily on their excellent newest album ‘Obsolescence’ but also including strong selections from previous albums, Abysmal Dawn, comprising four immensely talented craftsmen Charles Elliott (vocals/guitars), Andy Nelson (guitars), Eliseo Garcia (bass) and Scott Fuller (drums), scorched the stage with a display of technically skilled musical brutality, which was more evident on the newer compositions than the old ones, and vindicated their longstanding status in the Los Angeles metal community. They, ended this relentlessly rampaging set with the ominous ‘In Service Of Time’. Abysmal Dawn are, without doubt, as much of a reason to attend a show on this tour as any of the other bands.

Technical death metal masters Origin took the stage next and absolutely destroyed it with a set that boasted unbridled intensity from start to finish, engulfing the entire audience into a giant frenzy of mosh pits, walls of death, crowd surfs, and pillow fights. Having seen this band play much bigger venues as a support/co-headlining act on packages and festival tours in the past, it was an altogether different experience witnessing them slaughter a relatively tiny room in such an incredible manner. Vocalist Jason Keyser was giving it 200 per cent and more on every song, had the crowd completely in his grasp, and put forth what can only be best described as one of the best performances by an extreme metal frontman to have ever graced the city of Los Angeles. The “black metal vs death metal” wall of death he orchestrated was among the highlights of the evening, and also perhaps showcased the irony in modern-day sub-genre categorizations wherein such a clear divide between death and black metal actually exists. While 1349 were worthy headliners, Origin undoubtedly had the best crowd response of the show.

And lastly, at midnight, 1349 appeared on stage as their horde of fans moved closer to the stage to show their full support and extract greater energy out of the band in the process. Their previous Los Angeles area gig at the House Of Blues Sunset Strip as part of the Metal Alliance tour in 2014 left their fans more than slightly underwhelmed as sound issues heavily marred their set, and one felt that even their other past shows in this city had something lacking. But on this occasion, 1349 successfully put their best foot forward and delivered a more accurate representation of their music, playing a set that resembled a freight train in its flow and level of crushing impact, as frontman Ravn’s powerful vocals and stage presence garnered much appreciation from the crowd. The mosh pits were decidedly weaker than those during Origin’s set, purely because by this point people were tired from what the three great opening acts did to them. But in terms of the musical style, it was certainly fitting for 1349 to play last, and they brought this evening to a tremendous close with a performance that did not relent for a single moment.

Anything less than a sellout at a venue of this size would have probably been labeled a failure for a package featuring bands of this caliber and stature, so it was heartening to witness them succeed with an unbeatable turnout, give their best efforts on stage, and receive an equal level of response from a typically enthusiastic Los Angeles area extreme metal gathering. Chaos certainly raided Glendale, and is on its way to do the same in every city it visits on the remainder of its path.