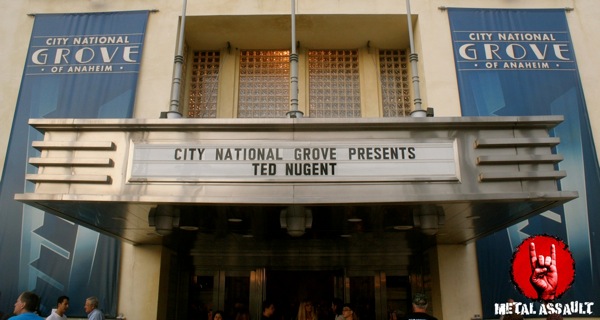 July 14th 2014, City National Grove Of Anaheim, Anaheim CA: Celebrating the release of his 14th studio album ‘Shut Up & Jam!’, his first set of original material since the 2007 effort ‘Love Grenade’, perennial American rocker Ted Nugent is currently on an extensive US headline run to present some of these new tunes along with an assortment of some of his most loved classics and a few deeper cuts thrown in the mix. The City National Grove Of Anaheim is very much familiar territory for Uncle Ted, but this year Anaheim got treated to a double dosage of the Ted Nugent experience as he played two back-to-back shows, the second of which took place last night.

With the giant American national flag in its backdrop, the drumkit positioned closer and more upfront in comparison to the setup most bands adopt at this venue, and walls of amps on either side of the kit, the stage at the Grove Of Anaheim was all set and ready for the Motor Ciy Madman and his band mates. The lights went out at 8:55 and the band began the 95-minute set with ‘Gonzo’, and with each song that followed they went from strength to strength. Nugent was in his full element both on guitar and vocals, ably assisted by the evergreen Derek St. Holmes on his side with some killer guitar work and vocal delivery of his own, and these two at the forefront were well backed up by the undeniably competent rhythm section of Greg Smith on bass and Mick Brown on drums. “It’s July 14 2014 and I’m still rocking. Are you fucking kidding me?!” yelled Nugent with uninhibited pride and genuine excitement, and those in attendance at the venue reciprocated at equal volume, showcasing their gratitude for the excellent rock show they were witnessing from a group of musicians that certainly knew how to deliver one.

It’s clear from this performance that even at the age of 66, Nugent still rocks and hasn’t lost even half a step, and if anything, he took it a notch higher as compared to the show he put on at the same venue almost exactly a year ago. For a man that old, he looks in fantastic physical shape which contributes to his exemplarily relentless energy levels, delightful guitar play and exuberant vocal delivery on stage for the entirety of the set. Even setlist-wise, one might expect him to stick to the same old classics all the time, and while the essential tunes like ‘Wang Dang Sweet Poontang’, ‘Cat Scratch Fever’ and ‘Stranglehold’ were very much included in this set, the rest of it was an enjoyable blend of the old, the new and the rare, along with a short and sweet rendition of “I Can’t Quit You Baby” as a bridge within ‘Wang Dang Sweet Poontang’. Some of the old timers and Nugent regulars in the audience were admittedly and pleasantly surprised by the inclusion of tunes like ‘Workin Hard Playin Hard’ and ‘Need You Bad’, by no means regular items in Nugent’s live set. 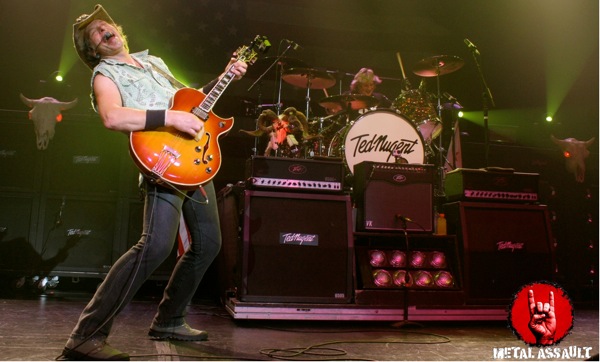 Of course, no Ted Nugent show would be complete without the odd political rant, and even though it felt to me like he didn’t do it as much as he did in last year’s show, he devoted a couple of minutes to this endeavor in the middle of the set, this time Congresswoman Nancy Pelosi being the main subject of his rants and in addition he expectedly made statements on some of his favorite topics. But shortly after he stopped talking and resumed rocking, ending the show on an extremely strong wave of great tunes.

Ted Nugent the musician undoubtedly still puts on a worthwhile show, and it’s no surprise to see the fans coming back in huge numbers every year to fill out places as big as the Grove of Anaheim. If you’re a resident of any of the 24 cities this tour is yet to pay a visit to, you’re by all means recommended to attend the show. Forget the talk and bask in the rock.

Check out a full gallery of 69 Ted Nugent photos from the show below, or view it here if you’re on a non-Flash device: